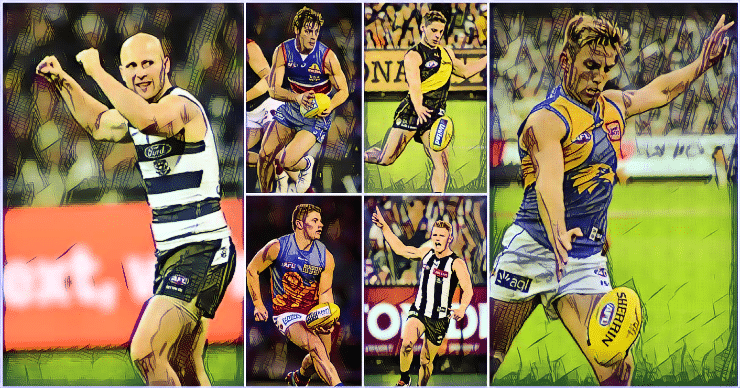 Ah yes, the snubs and the disrespect… all part of the annual naming of the All-Australian team, it seems.

This year we had Shannon Hurn snubbed as All-Australian captain – a situation that was somewhat rectified by the players when they voted him in as best captain at their own awards. We saw Scott Pendlebury named and sneak in ahead of teammate Adam Treloar, and Tim Kelly get in on what was basically the strength of the first half of his year.

But what about the other blokes? If it is good enough for Kelly to walk into the side with half a year of the best stuff under his belt, why not Ben Cunnington for his first half of 2019? And why not Josh Dunkley for his second half?

I suppose before I start, I won’t be leading any descriptive passages with how unlucky a bloke is not to be selected to the A-team. If we’ve all watched enough footy this season, we know their stories – no use harping on about it.

Let’s get into it.

The Swans pair get the nod and are accompanied by Rich, who given the competition he was up against, was a bit of a long shot to make the A-team. This is Lloyd’s second selection to the B-Team after being named on the half back flank last season. It seems as though selectors just don’t rate the amount of uncontested footy he gets and the 80%+ disposal efficiency he runs at.

Rampe was better known for a couple of errors this year – one allowed to slip through against the Bombers, and another costing his team a game when he gave away a crucial 50 metre penalty late in the game. Alas, Rampe’s form on either side of those incidents was excellent, and it’s a shame it overshadowed what a great season he had.

With both Lloyd and Rich in the pockets, you can rest assured that those breaking from half back will be getting silver service. They were ranked first and second in metres gained in the league this year, and ran at 82% and 81% respectively.

My man Nick Haynes – I had him in my own AA first team, but the other Mongrels overruled me. Some call it democracy; I prefer the term ‘treason’.

Anyway, with both Sicily and Haynes left out, my half back line was in tatters, but far out it strengthens this one. Sicily had the most intercept possessions in the league, and I still have fond memories of him manhandling Mason Cox and just using his better judgement to out-body him in just about every marking contest. This was Sicily’s second straight B-Team selection. Better luck next season, Sic…

Haynes had a stellar second half of the season, and came with a late run that was derailed at the final turn when Marcus Bontempelli took a nasty shot in the shoulder from Haynes’ larynx but luckily, Bont’s shoulder was okay to play the next week. Ahem…

Robbie Tarrant was almost pitching the perfect game until the commentators put their big, fat feet in their mouths as the Roos took on the West Coast Eagles. “Oh yes, Robbie Tarrant has not lost a one-on-one marking contest all year…”

I’m sure Tarrant was rapt for them to state that, as within a quarter and a bit, he’d had three contested grabs taken against him, with Josh Kennedy taking two, and Jack Darling taking one. If he gets through that game without a contested marking loss, does he make the first team in place of McGovern?

I’m picking wingmen in this team, because the pressure is off. Look, I get the argument that there should be designated wingers in the official team, but if you think McCluggage or Hill had better seasons than any of the mids picked in the first team, then you’re dreaming.

Anyway, let’s just call this the right of passage for McCluggage. Scott Pendlebury was selected on the bench of the A-Team and in terms of class, McCluggage is the heir apparent. He has those hesitation moves that Pendlebury has patented over the last 12 years, and he is starting to make them his own.

Treloar led the league in disposals, but is still haunted by the perception that he wastes the footy. Guys, he doesn’t – you’re thinking of the dude who was playing a few years back. This bloke now has poise and not only breaks lines, but is using vision to hit targets. If he has a similar year next season  and doesn’t get in, serious questions need to be asked of the selectors.

I’m not sure we’ll ever see Brad Hill play better footy than we did this season. Career-highs in both disposals and contested touches saw him add to his impressive outside run and carry. The thing about Hill is not his pace – it’s his endurance. He is running the same patterns, at the same speed in the fourth quarter as he is in the first. He wears you down, and leaves you in his dust.

I’m slotting two mids in here because… it’s my team. Feel free to make your own.

They’re flanking Tom Lynch who was the most potent of the key forwards in the second half of the season. I reckon Lynch, who kicked goals early in the year but went missing a fair bit as well, was probably two decent-good games away from cracking the A-Team, which would have been an amazing turnaround from the injury-riddled last couple of seasons.

Shuey on the flank is a cheat, and I’ve seen quite a few people bagging out Kane Cornes for having him in his best 22 for the year, stating he was never a shot at the league-wide best 22. I reckon those people should go back and watch the Eagles run over the top of the Hawks in Round 15. It was the best demonstration of leadership I’ve seen from him. He put the team on his back and refused to allow them to go down. 39 touches, 20 contested disposals, 11 inside 50s, 11 clearances… he was a machine.

And Dusty’s omission from the A-team was because he was competing against something very few, if anyone, will ever be able to compete against – Dusty. People remember his 2017 season so vividly that anything less than that seems like Martin is not playing at the level he could.

And that’s the thing, basically no one can play at that level – it was freakish.

Now I’m really cheating, aren’t I? Zorko in the forward pocket… not really cheating, no. Zorko led the league in tackles inside 50, which is a remarkable achievement considering how much time he spends out of the bloody forward line. This should actually put a lot of the “pressure” small forwards to shame. This bloke is doing work in the middle, running down into attack and STILL applying more defensive pressure than every other bloke in the league.

A few have knocked his captaincy at times, but that is high quality leadership.

Ben Brown needs no real case to be made. Second in the Coleman medal, yet he saw the bloke who placed sixth sweep in and take the spot. I really don’t know what to tell you about that. It struck me as strange then. It strikes me as strange now, and it’ll strike me as strange tomorrow. It’s the second year that Big Ben slots in at full forward in the B-Team. Looks like he’ll have to win a Coleman to make the first team, huh?

And the Little Master – second B-Team selection for him as well. Was the consensus A-Team forward pocket at the halfway point of the year, but form tapered somewhat and it appears as though the selectors don’t rate 20+ disposals per game and a goal a half to go along with it anymore. Maybe as Ablett gets a few more games under his belt and learns his craft a little mor… yeah, this was probably his last chance to notch AA number nine, wasn’t it? I reckon he made a great fist of it.

It came down to Goldstein and Jarrod Witts for the coveted B-Team starting ruck position, and I’ve opted for Goldy on the basis that Witts may have won more hit outs than anyone else in the game, but Goldstein actually had a 34.2% to 25.9% hit out to advantage win. I feel it’s pretty harsh on Witts, but it’s no use winning taps if they’re not going to your team, right?

Cunnington was another whose first half of the year established him as a lock for the A-Team… and then he had a seven week stretch where he cracked 30 touches just once and seemed to come back to the pack. Still, six games where he had 10+ clearances, and six games where he had 20+ contested touches ain’t a bad return.

And then there’s Dion Prestia. Paddy Farrelly… I put him in!

Prestia had a hugely underrated season, notching a career-high 27.45 touches per game. When he hit 30 disposals, the Tigers were 7-2, and he did that in five of the last six games as Richmond zeroed in on a top four spot. Many have spoken about the Tigers wanting to peak at the right time this season, but without the consistency of Prestia, they may not have been in this position at all.

Just as responsible for the Western Bulldogs renaissance as Bont or Jack Macrae, Josh Dunkley suffered due to playing the first quarter of the season or so as a forward, to very mixed results. His numbers since moving into the midfield have been incredible, and combined with the other two, he makes the Dogs a formidable force.

Andrew Gaff actually topped his 2018 numbers for disposals per game after sitting out the first two weeks with a suspension from last season’s… mistake. Despite the career-high numbers, Gaff was used more in contested situations, and his disposal efficiency suffered.

Brad Sheppard plays in the same team as Shannon Hurn and Jeremy McGovern. I’m sure there were a few selectors toying with the idea of three Eagles in the A-Team back six, but the calls of WA-Bias would probably start up again… I kid, I kid. However, there is some merit to not having three from the same team in any representative team. Between Richmond and West Coast, 66.6% of the positions in defence were eaten up. Not sure you can have it any higher between two teams.

And then there’s Nick Vlastuin – I loved his intercept marking this season. He is another of these Richmond unsung heroes that I love watching… but also kind of piss me off whenever my team plays them – STOP KICKING IT TO HIM!

I’m sure I’m not the only one who feels that way.

So there we go. Sorry Scott Wheeler – no Paddy Ambrose, but at least you know I’m listening. Jonathon Pope, no Daniel Talia – sorry, I just rated what I saw of Rampe above what I saw from DT. Peter Monagle – I hope I explained my decision of Goldstein over Witts to a necessary degree. Happy to talk more. Cam Allen – I couldn’t get Zach Merrett in there. So much quality in the midfield this season.

As always, hit me up on the socials, or support The Mongrel to create more and become a Patron of our site. Seriously, guys – $4.50 per month from enough people could see me out of my job and doing this full time. Imagine all the crap I could come up with if I had that sort of time???

Sorry fellas, I’ll have a word to KB, Richo and the rest of them and see if I can get you in the A-team next season.