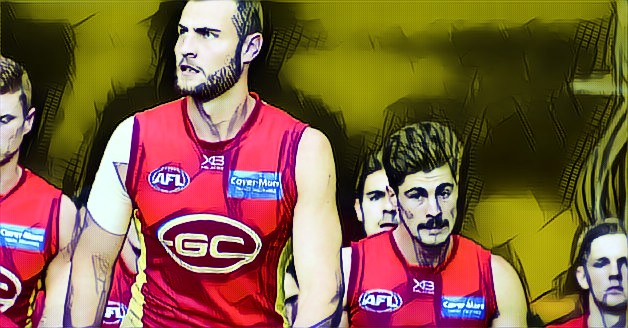 Time The AFL Brought The Suns Out Of The Dark

The AFL’s problem child, the Gold Coast Suns are unquestionably the league’s much heralded equalisation philosophy’s greatest ever challenge. Gold Coast’s plight has now forced the AFL to ask itself how much it trusts its own equalisation measures when it decides what – and how many – so-called “levers” it pulls in order to save the Suns. How much of the AFL’s back-slapping and self-proclaimed faith in its equalised competition, that was especially present when the Dogs and Tigers won flags in ’16 and ’17, was and is legitimate?

Currently, the Gold Coast Suns are a complete basket case, which is not telling anyone what they don’t already know. A second wooden spoon has been added to their otherwise empty trophy cabinet this year after collapsing in late-April and failing to recover. Since their impressive first month to the season, Gold Coast have not added to their three wins. They have now lost a humiliating eighteen games in a row.

Unfortunately, the club’s only contribution to the season since Round 4 was to act as a fixture bonus for the lucky teams who managed to play them twice. And for providing an exception to the AFL’s desired competition where anyone can win ‘on any given Sunday.’ It’s a bleak as that for the franchise that is yet to crack the top 11 in its existence. In fact, it has never ever looked like doing so after prematurely sacking coach Guy McKenna in 2014.

The AFL Commission, despite fierce opposition from the other seventeen clubs that will be significantly disadvantaged, is set to yield to the Suns’ struggles and give the club a priority pick at the start of the draft. Meaning, Gold Coast will be able to draft Victorian guns Matt Rowell and Noah Anderson with Picks 1 and 2, provided they take their much sought after picks to the draft.

But what other forms of charity do they deserve to receive?

Special access to the AFL team-less Northern Territory as an academic zone is being considered, and would not be an unreasonable level of assistance to be granted to Gold Coast. Thankfully, extra salary cap relief appears to be off the table, at least if AFL CEO Gillon McLachlan has his way. McLachlan told 3AW last week that he was against the idea of a form of retention allowance by way of an increased salary cap to assist Gold Coast.

“I feel strong about everyone having the same salary cap. I think it is a critical plank of equalisation. I think retention comes back to people, environment and leadership.”

McLachlan then went on to cite Gold Coast’s crosstown rival the Brisbane Lions as a template the Suns could follow in turning around their fortunes. However, despite, the Lions’ incredible 2019 season and turnaround to date, the football world must be cautious about using them as the league’s rebuild pinup boys. Surely, a side that has been down the bottom of the ladder for a decade and has only now finally risen – a significant part due to a large amount of AFL assistance that has included priority picks – is not befitting of this title?

Although, McLachlan should be credited for not following the easy route of salary cap concessions that will only hinder, and not help, the competition’s equalisation philosophy. This was clearly exemplified by the Sydney Swans’ infamous Cost of Living Allowance that gifted the club 300-game superstar Lance Franklin. Nevertheless, that did not excuse the AFL’s disgraceful decision to ban the Swans from trading, merely for following their own rules, ridiculous as they were.

But back on the Suns.

But the other thing the AFL should do for the Suns is bring them out of the dark.

Gold Coast played zero games in front of a free-to-air audience in Victoria for the entire season. Therefore, if you were/are one of the 70% of people who do not have Foxtel, you have not seen them play all year on free-to-air TV. How are the Suns supposed to gain more popularity if no one ever sees them play? It must be noted that every Gold Coast game is on free-to-air TV in Queensland but often on Channel 7’s secondary platforms such as the less-watched 7Mate. Gold Coast’s fixture is dominated by twilight or early Sunday games that are usually the game of least interest in the round.

In their nine-year AFL lifespan, Gold Coast have never played in “prime time” on a Thursday or Friday night. Ever. While football fans would not be overly infatuated in watching Gold Coast on Friday night footy, surely one Friday night game every decade is not too much to ask? If the AFL wants Gold Coast in the competition, put them in the competition properly. If they are not willing to put them on – even very, very occasionally – in a good time slot, then what’s the point? You have to give them an audience or don’t bother.

And please spare us the argument of “earning” Friday night games. Did anyone watch Carlton last year?

Giving Gold Coast the occasional decent timeslot will have to help with player retention/attraction that is crippling the club. And it is far less of an imposition on other clubs then extra salary cap space and priority picks.

It’s time for the AFL to make a call in Gold Coast – hide them or help them.