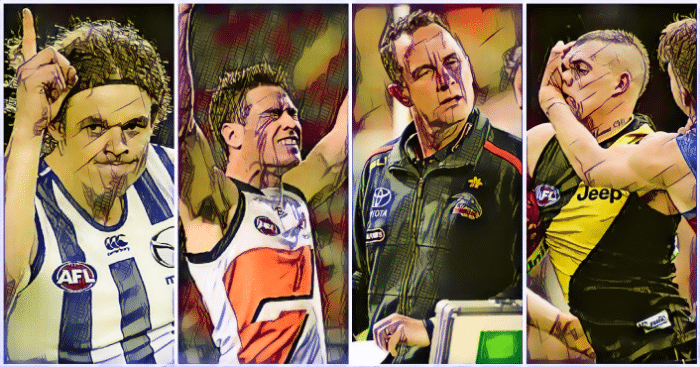 Ten Things I Learnt After Round 23

1 – IT’S HARD TO BELIEVE THAT THE PIES HAVE GOT THE DOUBLE-CHANCE!

If you’re a Collingwood supporter reading this, I hope you realise how good your club is.  With all the injuries, betting scandals, and sometimes indifferent form, it is beyond amazing that the Magpies now find themselves heading in to another finals campaign in the Top Four.  All you could want from the club you support is to get value through getting the most out of your list, and the depth and resilience of this club is nothing short of amazing.  They will take on Geelong in week one of the finals at the MCG.  The Cats can protest the lack of a home final as much as they want, but 32,000 doesn’t go into 145,000 paid up members.  And many clubs no longer have a home ground, let alone get millions to upgrade their facilities.  I think we’re all sick of Chris Scott’s carrying on.

2 – SYDNEY SWANS GOT THE FAIRYTALE FINISH FOR THEIR STARS.

Not only did Buddy finish with a sold four goal performance in his 300th game, last quarter goals to both McVeigh and Jack with a resounding win over the hapless Saints seemed to put a beautiful exclamation point on the careers of these two retiring premiership players.  As for the Saints, their last month has been ordinary after a promising start under caretaker coach Brett Ratten.  Will this damage his prospects to get the job and does the availability of Lyon change anything??

3 – THE LAST TWO MINUTES OF THE GAME IN TASMANIA WERE A REFLECTION OF MELBOURNE’S SEASON.

What always amazes me is the regularity in which the poorer sides lose close games which could go either way.  It’s always a poor decision or a crucial mistake, as was the case when Jones went inboard with two minutes left and turned it over.  Higgins was left alone in the forward 50 and kicked the goal that would prove the difference in the end.  Both Melbourne and Nth Melbourne need to be busy during trade period.   I can’t see either side doing too much damage in 2020.

Maybe the Blues were tiring.  Perhaps they had nothing left to play for.  Nobody gave Carlton a realistic chance of beating Geelong at their home ground, but most thought the revived Blues outfit and their refusal to give in would mean the Cats would have to work hard for their win.  But, unfortunately, it was obvious early that the Cats pretty much did as they pleased, with Dangerfield and Ablett seemingly without an opponent.  Some are talking up Carlton to play finals in 2020.  I’ll reserve my judgement, but unless they can get someone who can genuinely help their skipper do some of the heavy lifting, mid-table is the best we can expect in 2020.

5 – BEN BROWN IS NOT WELL LIKED BECAUSE EVERYONE I SPOKE TO WAS CHEERING WHEN CAMERON PASSED HIM.

I was among friends on Saturday night while the Suns and Giants game was happening, and when I informed a pal that Cameron had slotted his seventh goal and taken out the Coleman, there was a collective cheer.  Now I don’t know Ben Brown, but he seems a good bloke.  So this reaction is a little odd considering the sheer pleasure emanating from the room I was in.  I’m guessing it’s the long run-up that pisses people off.  Let’s face it, it’s bloody annoying.  It’s just as annoying as Rafa Nadal’s antics between points!!  So I’m guessing that’s why everyone wanted Jeremy to get the Coleman.

6 – DID THE EAGLES DECIDE FINISHING FIFTH WOULD BE BETTER IN ORDER TO GUARANTEE A HOME FINAL?

It’s a bit of a conspiracy theory, but unless the Eagles knocked off the Hawks by 40+ points and Brisbane lost by similar, the likely outcome of them winning would be a road trip to Brisbane in week one of the finals.  And if you recall, Round One saw Brisbane spank the reigning premiers at home by 44 points.  So, perhaps a week off, followed by what will no doubt be a cruisy victory against the Bombers at home, the Eagles would then probably fancy their chances against the loser of the Lions and Tigers game, and maybe Nic Nat comes in for that clash… (cue Twilight Zone music…)

There are problems at Adelaide all right, so it’s usually the coach who is first to go.  Regardless of whatever takes place, this aging list certainly needs to be turned over.  They have the age profile of a list who should be contending for a flag but clearly isn’t in the frame.  Time for a rebuild for mine, and if that’s the case, is Pyke the man to guide them through that?  I don’t think so.  I can think of one who might be…

8 – THE LIONS SHOWED ENOUGH TO PUT FEAR INTO THE TIGERS WITH A FINAL AT THE GABBA.

Richmond started hard and the Lions were stunned.  They fought hard and got themselves back in the game and showed me that they’re no easy beats, and would be a different prospect at home.  The Tigers may be in for a rude awakening if they don’t acclimatise quickly, especially after having spent seven straight weeks at the MCG in what can only be described as a dream draw.  I still fancy the Tigers, but anything is possible.

9 – PORT AND FREO PLAYED FOR THE INAUGURAL “WHO GIVES A STUFF” CUP.

If ever a game had no meaning whatsoever, this was it.  Both sides out of the finals race, one whose coach was dumped during the week and both playing indifferent footy for most of the year.  Even the clash between Boak and Fyfe in the Brownlow stakes couldn’t excite me.  I vote next year, if we have a similar scenario at Round 23, we cancel the game.

10 – I’M LOOKING FORWARD TO TRADE PERIOD WHEN I FIND OUT MY BELOVED BLUES FAIL AGAIN TO LAND A BIG FISH.

Listen to these names: Stephen Coniglio, Tom Papley, Jack Martin, Sam Gray, Karl Amon, Brandon Ellis. Apparently, they’re all connected to Carlton as possible trades. Now, I recognise we can’t get them all. What worries me, is that we’ll get none of them. This time of year coming up is where you’ll hear repetitive terms like “destination club” or “free agency” or “salary cap space” etc, etc, etc. There’ll be more rumours from unspecified sources than you’ve heard before. The end result will be the clubs near the top of the ladder will end up with the better players, and this idea of equalisation touted by the AFL is an illusion. Yes, I’m a bitter Carlton man, but tell me again how I’m wrong? I bet you can’t.