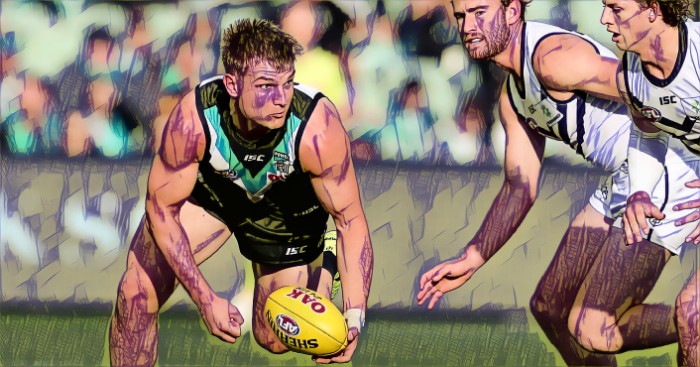 The final game of the season was more than the dead rubber it seemed. Although finals were out for both sides, Port were playing for pride, and wanted to finish the season strongly. Fremantle, under interim coach David Hale were given a license to play with freedom and to go out and have some fun; the main aim for them, though, was to play in a different style – or offer something different to show fans that the sacking of Ross Lyon was justified.

Fremantle had never beaten Port at the Adelaide Oval, but in 2019 interim coaches had always began their tenure with success. Would it be the same for David Hale?

With both sides having inconsistent seasons, it was an intriguing match to look forward to.

Here’s how I saw it:

For Fremantle, the first half was almost a perfect reflection of their season. They started with a bang, scoring 5 goals in the first quarter. They played a fast and attacking brand, willing to take the game on and although they made some mistakes by foot, they were able to capitalise on the back of their new-found enthusiasm. The second quarter was the polar opposite: they lost control of the game, lost their run and carry, went into their shells and constant turnovers in dangerous places were jumped on by the Power and they looked woeful across the field.

The Power’s first half was a lot more controlled. They butchered chances in front of goal, but otherwise controlled the ball well. Their defence was a touch disorganised in the first quarter, but as they gained the ascendancy and began to win the contested ball, their set ups became better organised. The Power were able to grind Freo to a halt and then capitalise on predictable turnovers. Although the margin at half time was only fifteen points, it felt as though the Power were in a much more comfortable position.

The second half was one-way traffic to Port. In the third quarter, I was wondering how Freo would be going had they been playing Port’s SANFL side; my guess was they’d be headed toward an honourable loss. The third quarter – and most of the fourth was all Port: Freo couldn’t get their hands on the ball, and when they did, they went backwards, sideways and then turned it over going forward; the Dockers had around five tackles for the entire third quarter. The entire half was Port just being given the ball by the Dockers and then enjoying jogging it into their forward 50 where some resemblance of a contest happened – sometimes.

On the bright side for Fremantle: in the third quarter they went at hundred percent efficiency going inside 50 – one goal from one inside 50. That, my friends, is called a backhanded compliment.

The fourth quarter was a lot more inspired from the Dockers early. They managed to gain a little bit of momentum and the ball spent some time in their forward line. But their forward structure – which Hale had been in control of all year – was ineffective, and their efforts were too little too late. Port lifted again late and took control of the game until a couple of junk time goals to Walters and Fyfe put a band aide on a broken leg of a game.

Port Adelaide were clean by foot and managed repeat inside fifties with absolute ease. It was only their inaccurate kicking for goal, and the sheer numbers of Fremantle defenders which prevented the game from blowing out early. They cut through Fremantle’s defensive zone like a hot knife through butter.

Port had an answer to every question Fremantle asked. Their skill, control of possession and decision making – especially going forward was the Jekyll to their last weeks’ Hyde. 35 scoring shots from only 52 inside 50s is good by anyone’s book – and keeping their opponents to only 32 inside 50s (including only one in the third quarter) highlighted just how effective they were. If for some more accurate shots on goal, this could easily have been a ten goal or more win. Playing in this way would have won them most games against most opponents, and despite some patches of mediocrity in the first and final quarters, it was reasonably polished performance.

THE OLD V THE NEW RUCK

Experienced ruckman, Ryder and Lycett enjoyed the inexperience of Fremantle’s two tall men. Scott Jones in his sixth game and Hugh Dixon on debut competed strongly and did many things right, but they lacked the class, composure and experience of their two opponents. Scott Lycett made a mockery of the club dropping him with a near best on ground performance. He amassed 22 touches, 22 hit outs and was a massive presence around the ground, as he taught his younger opponent a lesson in AFL ruck craft.

Charlie Dixon was a massive presence in the forward line early in the game, making his opponent in Hamling look second rate. He had to fight a bit harder for his touches later but popped up in the final quarter to take the margin past 50 points. A dominant presence up forward, he worked hard to create space for his fellow team mates who enjoyed feeding off his work.

Westhoff was equally as painful for the Dockers to handle. In tandem with Dixon, he stretched the Dockers’ defence thin. He was influential around the ground with 23 touches and a couple of goals.

Fremantle have been criticised all season for their poor kicking and in particular the awful way they exit their defensive 50. Through the middle of the game, it was far too easy for Port to set up a defensive zone. David Hale at times played two men back in defence which took away what few targets the Dockers had to escape their defence.

Time and time again, Fremantle won the ball in back and hack kicked it forward to a Port Adelaide defender. After half time, it took almost 15 minutes for the ball to find its way into Freo’s attacking half – and that was by a simple Port Adelaide switch which resulted in a goal to the Power.

Fremantle threw a debut at young ruck/ forward Dixon in the final round of the season. And while it was a game to forget for the big man, he competed well for a rookie. He was confident by foot and he took some strong marks – one of which resulted in Fremantle’s best  passage of play for the third quarter. A nice little flick early in the fourth set up a Walters goal early in the fourth. He did just enough in his first and (potentially) last chance to show the Dockers he may be worth another year next season. A great round the quarter goal in the final minute of the game gave him something to celebrate on the flight home.

I have all the time in the world for Wines and today he showed his class in spades. It wasn’t a flashy or inspiring performance necessarily, but he used every one of his 33 touches with purpose and class. Eight tackles and six clearances contributed to an all round performance and what was perhaps a best on ground performance.

In what is likely tipped to be Ed Langdon’s last game for the Dockers, it looked as though it might be his best. He kicked a personal best of two goals within 10 minutes and had a presence. After quarter time, though, he had very little impact. His 35-disposal game gave a flattering reflection to what turned out to be a poor (potentially) farewell game.

Nat Fyfe was captain courageous and, as usual, was a class above his team mates. He didn’t get the ball his usual amount, but his efforts to lift his team did not go unnoticed. The Fox commentary team were making comparisons to his three votes in an 80-points loss last year, and wondered whether he could do so again, but, no. He wasn’t that good.

“What Connor Rozee does can’t be done” said the commentary team, as he sunk a beautiful goal from the boundary line – after duping his opponent into taking the ball out of bounds deliberately. And that summed up his game. For a first-year player, it is difficult to put a lid on this bloke’s career. He dominated as much as any Port player today and almost every single one of his touches made him look classy. He finished with 2.2, saving his best for last and if Port can take nothing else from this season, they know they’ll have a Brownlow winning player in the making.

Unfortunately, I can’t write on every player: there were so many good for the Power and so many bad for Freo. So sorry if I’ve missed anyone.

It was a very strong team effort from the Power and the Dockers, again, relied on too few.

It was a pretty poor match – for anyone who wasn’t wearing Teal. Freo were mostly insipid and Port got better as the game went on. Towards the end, the Power put the cue in the rack, and Freo scored some junk time goals to get the result below 45 points.