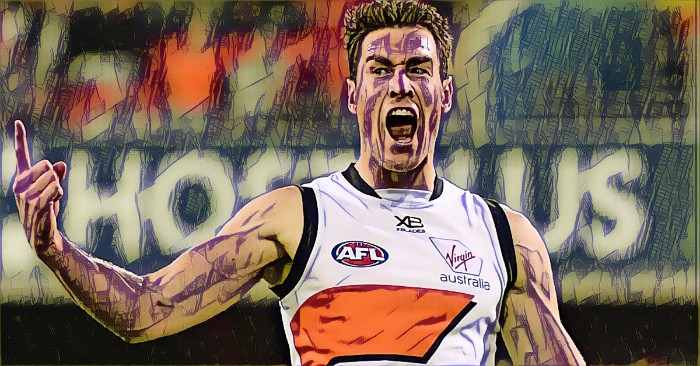 It was a night of records, milestones, bittersweet retirements and Coleman celebrations as the Giants managed a comfortable win against a Gold Coast team that simply couldn’t capitalize on their opportunities despite going inside 50 only two times less than their opponents.

Jeremy Cameron became the first of the drafted Giants to reach 150 games; the foundation player kicked a career-best nine goals in a dominant display, largely thanks to teammates who were directly looking for him at every opportunity in the second half. Cameron was ecstatic – barring a colossal bag of 15 goals to Tiger Tom Lynch – he etched his name onto the Coleman Medal for this season, and gave the Giants their first piece of real AFL history, collecting one of the big awards.

It was a good day for Sydney football, with their cross-town rivals celebrating 300 games from Lance Franklin and the retirement of four premiership heroes. Whilst the Swans honoured the past, the Giants celebrated the current, with this game as much an effort to secure some silverware for their full forward as it was to collect four points. The Giants  were in a situation where their spot on the ladder was secure, and this spelt trouble for any defender manning Cameron.

Gold Coast got to within 10 points early in the third quarter before a GWS blitz blew them out of the game, sending the retiring foundation Sun and 2010 Brisbane Merrett-Murray Medallist, Michael Rischitelli off with a loss as GWS locked in a home final.

Harry Perryman marked inside 50, outmuscling Jordan Murdoch with a little push. Every man and his dog knew that with Cameron lurking like an annoying mosquito in his ear at night, that Perryman was going to hand off to him. Except probably the Gold Coast defenders, who looked like they were just waiting for this season to end. Perryman handballed to Cameron who snapped a goal on one step. Credit also goes to Ian Hill for keeping the ball alive prior to that.

The work ethic of Jeremy Cameron was on full display for his first goal, running from the wing to deep inside 50 while his teammates were switching the play to the other side of the ground. Cameron converted for his first of the night, but credit also lies with Shane Mumford for applying one of the AFL’s forgotten arts, shepherding Jack Lukosuis creating space for his midfielders.

Prior to Jeremy Finlayson kicking the first goal of the third term, it had been a long time between drinks in second halves for the Giants. Not long after the commencement of the second half, there was a frantic period in the Gold Coast forward 50. Players of both teams were dropping marks, tackling and scrambling for the ball under intense pressure. It’s the type of pressure you see when the game is on the line and at this stage, it was still in the balance. The ball eventually found its way to Adam Tomlinson who hacked it out, desperate to clear the congested area, but it was a good 40 seconds of pure grunt as both teams looked to gain the ascendancy. Following the scramble, Finlayson scored the Giant’s first goal of the third quarter, which turned out to be their first goal in a second half at all since Jacob Hopper’s effort at the 16-minute mark of the fourth quarter against the Swans in Round 20. For those playing along at home, that’s 144 minutes and 39 seconds of second-half action between second half goals. It was also Finlayson’s 37th goal of the season, a new career-high for him.

Gold Coast conceded a goal with 10 seconds to go in the first half from a forward 50 stoppage. The throw-in landed short, as so many throw ins seem to do at the moment, with Jarrod Witts palming it forward, but Josh Kelly ran off his opponent in Jack Bowes and got goalside for a clever checkside from a tough angle. It was the slight edge that the Giants needed, particularly given their recent second half woes. They went into the sheds with the momentum they needed.

Inaugural Sun Jarrod Harbrow had a spectacular moment when he gathered a ground ball, anticipated contact from two Giants but spun out of trouble as his opponents closed in. It forced his opponents to crash into each other as he got the rebound. The Suns moved it up the line, but in a familiar tale, the resulting kick went to no one in particular.

Jeremy Cameron had a day out. The 150-gamer only had two goals to halftime but a third-quarter blitz saw him get his seventh on the three quarter time siren, and at that moment, overtake Ben Brown for Coleman honours. Cameron was able to take strong marks through pushing off his inexperienced opponents and should’ve had more than the nine majors he finished with. He took 12 marks, had nine inside 50 disposals. Hopefully he can keep this momentum throughout their finals race, as the Giants have looked a little lethargic without him

Lachie Whitfield had a blistering first quarter where he collected 11 of his 27 disposals. Covering every inch of grass on the ground, Whitfield performed admirably around the contests with six clearances, five tackles and involvement in a lot of the Giants movements forward as they established a lead.

Josh Kelly is a machine and his ability to rove around stoppages is among the best. He did this on two occasions and they each resulted in goals. Kelly had a great first quarter with nine disposals. His work across the midfield, and ability to win a contested ball showed in his delivery inside 50 as he gave his forwards a great chance to score. If he could get a clean run at a season and go injury free, who knows what his ceiling is.

Lachie Weller may still be coming into his best football, averaging 22 disposals for the year. To add to this, the former Docker has a high standard when it comes to tackling. Halfway through the second quarter, he’d already matched his previous best of eight tackles, and managed another three for the remainder of the contest. The Suns paid a high price to get Weller to the Gold Coast, but there have been plenty of signs this season to show that he may just be worth it in the long run.

Jarrod Witts certainly won his ruck battle against Shane Mumford. It appeared even Mumford and Lachlan Keefe were aware of Witts’ dominance, so much so that the Suns ruckman won five free kicks, with the overmatched Giants bigs more concerned with making contact with him and giving away free kicks in the process. Witts was well up on his season disposals, seeing the pill 20 times and used it at 80% efficiency too, which is also higher than his season average. Not afraid to go after the ground ball, he had 11 contested possessions and made his presence known with a series of tackles and one-percenters.

Added to the side this week and playing his 100th game, Aaron Young took a mark on the 50m line to commence the third quarter. Taking his time to get up, he still managed to catch his opponent off-guard and gain a few metres. Young ran around the man on the mark, crept a few metres forward and bombed home a goal which Sam Day allowed to bounce through. Ben King soon got the margin drawn back to 10 points with his first of the night. It was a great start to the third quarter for the Suns, and would’ve had the GWS players, staff and fans nervous of a continuing trend from the last couple of rounds.

Gold Coast were going to ground a lot more easily and often than the Giants. It was usually when there was a one-on-one chase or missed tackles. This allowed the Giants to gain some extra space to launch the ball forward. Even experienced Sam Day lost his footing at crucial moments. In one instance, the Suns were looking for him on the wing, clearing it from their backline, only for Day to slip, which saw Phil Davis marked unopposed. Davis went inside 50 and the resulting play ended in a goal to Daniel Lloyd. The dew must have been a problem right across the board as even the umpires went down at stages.

The Suns were let down by their delivery inside 50 and their conversion rate. Not the worst in the comp, but at 44% it’s a fair way off the best in the grand scheme of things. As a result, the Suns were had just as many scoring shots as the Giants early in the second quarter but were still trailing by 25 points, unable to slot one through the big sticks until Jack Bowes was held in a marking contest and went back to kick a major.

It seemed as though all Cameron needed to do was run into space and it was a given that whichever Gold Coast player was playing on him would be completely left for dead. Burgess was paired up with Cameron for a large part of the game, but couldn’t go with him at ground level. Putting third-gamer Caleb Graham on the superstar forward basically had the same effect. The Suns desperately need an athletic tall figure down back who can take on the best forwards. They’ve really missed Rory Thompson, Jack Hombsch and Sam Collins. Charlie Ballard will develop into a fine player, but he needs support around him in order to flourish in the Gold Coast system. Too often, he is being asked to undertake jobs way beyond him.

The second half had a bit of Jezza-palooza about it, to the point it almost felt selfish if a teammate didn’t at least look for Jeremy Cameron in the Giants forward line. There’s the team thing, and then there’s the ‘kick-it-to-Jezza-all-the-time’ thing which, when the Giants became somewhat obsessed with, even when the forward line was crowded or there were mismatches. Cameron may have had five consecutive scoring shots but two successive shots were both behinds because, dammit, he doesn’t want to kick a set shot from 15m out does he?! TWICE! It didn’t matter in the wash up, as he became the first player this year to kick five goals in a quarter and the first Giant to kick five in one quarter in their history.

So, going forward, where are we? GWS needed this – they ran into an ailing Gold Coast at precisely the right time, with their last two weeks having them appear as anything like a contender. They now get another week off to prepare for a do-or-die final, but that will be Giants Stadium, and with Cameron firing, Kelly and Whitfield in the guts, and the probably return of Toby Greene, they have the tools to rattle a few finals cages.

For the Suns, they were ready for this season to be over about seven or eight weeks ago. The young legs just got too fatigued, and after a great pre-season and start to 2019, the wheels fell off once the other teams got rolling. Player retention and a couple of good pickups in the off-season, combined a better fitness base will see them in a good place in the first half of 2020, but my guess is that they will once again fall away.