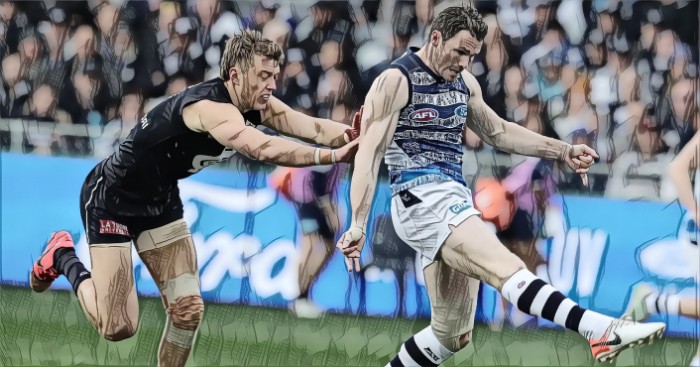 Good and Not So Good – Geelong v Carlton

For Geelong, it was an opportunity to cement themselves in the top two, and silence some of the doubters. For the Blues, the Teague Train had entered Kardinia Park and it was another chance for the young Blues to show their improvement. In trying conditions, the rampaging Cats were never troubled, and a barnstorming first half opened the door for a commanding 68-point win. Here is the Mongrel’s Good, and Not So Good coming from the Cats dominant victory over the Baby Blues.

When Geelong kicks 19 goals and has 34 scoring shots, one would expect spearhead Tom Hawkins to have had a day out. This is what makes the Cats victory all the more remarkable, as from start to finish, it was almost the complete team performance across the board. With Hawkins being well held by Jacob Weitering, it was Geelong’s smaller forwards and midfielders who stepped up to hit the scoreboard, with Patrick Dangerfield, Gary Ablett and Luke Dahlhaus combining for 10 of the Cats goals.

The inclement weather meant that the big hulking forwards were in for a tough day, and as such, were all at the bottom of the stats sheet. But when taking a glance at the top, it continues to amaze that Tom Stewart racked up 27 disposals at 85% efficiency with minimal fuss, that Ablett can gather 28 disposals to go with three majors but somehow be overshadowed, that Mark Blicavs and Jack Henry can take Mitch McGovern and Harry McKay out of the game, that Joel Selwood can be ferociously tagged by Ed Curnow and Geelong is still able to record 365 possessions in the soggy conditions, and that despite seeing more of the ball, Geelong’s pressure can be so immense that they lay more tackles than the Blues.

Young guns Tom Atkins and Jordan Clark are battling injury but should force their way back into Geelong’s 22 for the finals, and although the ruck is still a slight issue, Chris Scott has backed in Rhys Stanley to use his agility to combat some of the game’s best big men in September. This is a complete team, and one that still has improvements to be made, but if they can replicate today’s effort against the AFL’s best, another flag will be heading down the highway in a few weeks’ time.

Sam Walsh was born in the year 2000. He is just 19 years of age. He also has recorded the most disposals by a first year player since Champion Data started keeping record. A superstar in his first year, Walsh’s season averages are incredible, with 25 touches, five marks and three tackles across 22 games. An almost certainty to win the NAB Rising Star Award, Walsh has put together a season that is almost beyond belief.

But this has been seen before (albeit to a somewhat smaller degree). David Teague will be acutely aware that the dreaded second year blues are on the horizon. Jacob Weitering suffered the same fate in 2017, often finding himself playing a variety of different roles in a ploy that ultimately hurt the young key defender. Only this year has Weitering found his potential once again.

Let’s take a quick look back at the past five NAB Rising Star winners and examine where their careers have taken them. Jaidyn Stephenson is one of Collingwood’s most important forwards but has been hit by a gambling suspension, Andrew McGrath never seems to play a bad game, but has not yet appeared to have taken his game to the next level, Callum Mills has gone backwards since a few injury concerns, Jesse Hogan has returned to Fremantle but has also been hampered by injury and personal circumstances, and Brisbane’s rapid improvement has seen 2014 winner Lewis Taylor spend most of 2019 in the NEAFL.

Perhaps Sam Walsh is on another level compared to these players. Perhaps the second year blues will pass by Walsh as they did with Joel Selwood, whose career has skyrocketed since winning the Ron Evans Medal in 2007. One thing is for sure though. Carlton have a diamond on their hands, one that can lead them to glory for a long period of time. He is a special player, and must be protected at all costs. The Blues have had so much talent slip through their fingers and they cannot afford for it to happen again.

THE NOT SO GOOD

While the Cats know that to win a premiership, they will need to win games at the MCG, but it is extremely unfair that Brisbane, West Coast, Richmond, Collingwood and Greater Western Sydney will all get to play finals at their home grounds having earned them, but the Cats, being a Victorian team, will have to move to the MCG to maximise revenue for the AFL. It is grossly unfair for Geelong to have continue to move their home finals to accommodate more spectators, and it is equally unfair for those in the media and fans to criticise Chris Scott for voicing his displeasure at the AFL wanting more money to be made in lieu of fairness to a team that has earned the right to play its finals at its own venue.

Patrick Cripps can’t keep doing it on his own. Ed Curnow and Marc Murphy are in the twilight of their careers. For David Teague’s men to start their climb up the ladder, they will need their second tier of midfielders to step up and help carry the load. Unfortunately, on today’s showing, it looks like it’ll be another year of two before this comes to fruition.

So who are the second tier? Who are in the young brigade that Teague needs to see steeping up? Paddy Dow, Lochie O’Brien, David Cunningham, Sam Petrevski-Seton, Zac Fisher and Matthew Kennedy are the six players whose development stagnated slightly in the Brendon Bolton era.

These are the combined stats for the second tier six in this game. 63 possessions (37 kicks, 26 handballs), 15 marks, 7 tackles, 2 clearances, 11 inside 50’s and a disposal efficiency of 59%. With Murphy and Curnow heading towards retirement, these players need to improve these numbers significantly in the next 12-18 months. All have talent, and all the ability to start the upwards trend, but it is clear that Bolton’s tenure as coach did these players no favours in the infancy of their careers, and David Teague will need to make it one of his highest priorities to get these young stars to a point where they can start to dominate games and churn out noteworthy performances on a more consistent basis.

Who were the players of the match?

Nine seconds. That’s all it took for Patrick Dangerfield to signal his intentions that the Blues were in for a tough afternoon. It was a simply outstanding performance from the leader of the Cats’ midfield, and his work in front of goal took pressure off his forwards. 34 disposals, including 18 contested possessions, Dangerfield was mesmerising on both sides, and his defensive work was as influential as his four majors. Finishing with a clear team high 12 clearances o go with six tackles, perhaps the only knock on Dangerfield’s game was his 64% efficiency, but this has been a feature of Dangerfield’s game since his career started.

Playing in just his third game of the season, and ninth overall, Geelong has found a finals wildcard in young gun Quinton Narkle. Persistent hamstring injuries have prevented Narkle from taking the field, but against the Blues, Narkle reminded us all of his supreme talent and ability to break the lines and give Chris Scott some x-factor going into September. Gathering 27 disposals, Narkle’s clean ball use was a highlight in a rain affected match, and his eight clearances will please Scott, as it is clear that Narkle has the talent to become a supreme player through the middle. Oozing class from every pore, Narkle is a suddenly a key to Geelong’s premiership aspirations.

What more can be said about this man? Ultra consistent, an argument could be made that no player in the AFL is more important to his team than Cripps is to the Blues. It was a typical display from the Carlton skipper, who, along with Ed Curnow and Marc Murphy, did all he could to drag his team back into the contest after being blown away in the first half. Collecting 35 disposals, Cripps’ 20 contested possessions were a game high, as were his 13 clearances. Also recording a team high eight tackles and six inside 50’s, Cripps needs his fellow young stars to develop quickly to give him some support through the midfield.

The ruck is by far Geelong’s weak spot, but Stanley is a genuine A-grade ruckman that can turn a match with patches of sheer dominance. Chris Scott has trialled several different big men at various stages this year, but has settled on Stanley as his No. 1, and his decision was vindicated this afternoon, with Stanley winning his battle with Matthew Kreuzer and giving his midfielders first use of the ball time and time again. Using his running ability to cover a heavy ground with ease, Stanley’s 35 hit-outs were the key to Geelong’s midfield dominance, and his 15 touches, six score involvements and four clearances will build the Cats’ confidence that the former Saint can carry the load into September.

Doing his best to step up and support Patrick Cripps, veteran Ed Curnow was his brilliant best at the midway point of the third quarter, until disaster struck, with the older Curnow going down with an apparent Achilles injury. At the time of his injury, Curnow had amassed 29 disposals, eight clearances, five inside 50’s and four tackles, all while completely blanketing Joel Selwood and restricting him to just 10 possessions in three quarters of football. Along with Marc Murphy, Curnow is vital to Carlton’s future, as he will be main ally for Cripps in the midfield until the second tier can step up consistently.

Who needs to improve?

Traded in by Carlton at the end of last year, Mitch McGovern was supposed to be the forward line answer to the Blues scoring woes. In absence of Charlie Curnow, this was McGovern’s time to shine. However, inconsistency has dogged the former Crow, and this afternoon was no different. Only troubling the statisticians eight times, the weather certainly did McGovern no favours, but in matches like this, when the ball isn’t getting to you, it is up to you to get up the ground and find it. McGovern, Curnow and Harry McKay can form a deadly forward combination, but only if McGovern, the most experienced of the bunch, can resurrect a career that has so much potential.

A quick, skilful small forward, Gary Rohan was supposed to thrive in these conditions. Instead, the old Rohan came to the party, and the former Swan had no impact on the game at all. Not helped by a slight injury sustained in the third quarter, Rohan only managed six touches, and of those, only 4 were effective. This has been a trademark of Rohan’s entire career, and while the start of 2019 was fruitful, with 15 goals from his first six games in the hoops, his next 12 appearances have been barely average, with only 9 goals coming off Rohan’s boot.