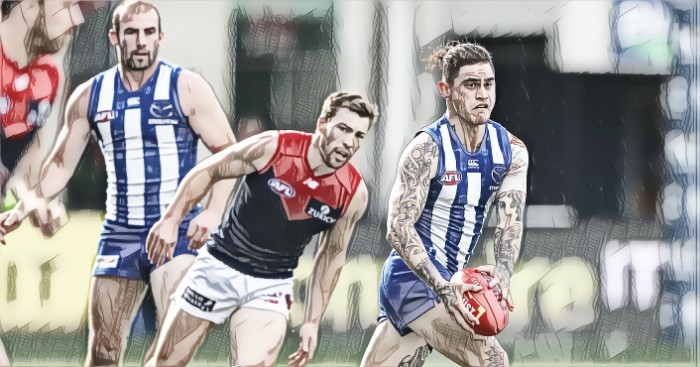 Ah, the old dead rubber match in the last round of footy.

Two teams who don’t have the biggest of followings, sitting in low positions on the ladder and playing in the dingy doldrums of Hobart on a wet and windy day. Hard to believe the networks weren’t clamouring to broadcast this one around the nation.

North Melbourne played host to the Demons at their home away from home and despite some pundits writing off the fixture as irrelevant due to its lack of impact on the finals, this Mongrel believe there were plenty of storylines adding some extra layers to the contest. Going in, one could only hope that the match lived up the same standard of their last two encounters at the stadium.

Let’s get stuck into the stuff that mattered.

If you are a Melbourne fan, I’m sure you’re holding tight onto the hope that a player like Bailey Fritsch provides. This kid seems like a gun. In this game, Fritsch acted as the lynchpin for the Melbourne forward line. He took some strong marks (some high-flying ones too), kicked three goals and was the Demons number one inside 50 target. Whenever Fritsch went near the ball, the game picked up in excitement levels, which I think is probably the highest compliment a player can receive. Every player wants to be the one that the people want to see play and I want to see more of Fritsch on the big stage.

Viney did a fantastic job of curtailing the influence of Ben Cunnington. This wasn’t a hard tag by any stretch, but any time there was a stoppage in this game you could always find Viney. He hunted Cunnington and ensuring that if Ben got the ball, he would be there to lay the tackle. This actually happened on several occasions when Goldstein would win the tap down to Cunnington only for him to be stifled by Viney, lose the ball and have Melbourne gain the clearance. It was a classic matchup of two hard nuts and Viney won the day for his team, but unfortunately his teammates couldn’t match his leadership and allowed North to eventually overwhelm them.

On the stats sheet Gawn gave Goldstein a fair lesson, despite Goldstein making an effort to hold his own against his counterpart. Gawn clearly took the honours, but a fair part of his best work was done when he was playing forward. Perhaps it will be another off-season of Melbourne fans wondering if they should be playing Gawn forward on a more consistent basis? If today is anything to go by, it’s a role that Gawn would thrive in. The only issue is they don’t have another ruckman capable of playing the number one ruck role. Gawn finished with over 40 hit outs, 20 contested possessions, 10 clearances, four contested marks and three goals. Dominant.

Higgins has the benefit of playing on the outside. His possessions look flashy and getting the ball on the run and nailing 50-metre low bullet passes will rate highly on anyone’s radar. Nevertheless, I thought Higgins was clearly amongst the best today with 34 disposals, at 88% disposal efficiency and 387 metres gained. The fact he kicked the winning goal for North was a complete bonus, but it showed that Higgins stands up to be counted when his team needs him.

It was a fantastic game by Polec. The commentators did point out the game of chance he was playing on the wing throughout the game, but I thought he hurt the Demons more than his opponents hurt North. Polec’s final numbers of 29 disposals with nine inside 50’s, eight score involvements and two goals show that he was clearly North’s most effective attacking midfielder.

Oliver has transformed from a young upstart to a proven midfielder. I have had the joy of covering a few Melbourne games in the latter part of this season and the one consistent aspect of the Melbourne Football Club is that Clayton Oliver will deliver. Week in and week out. Not discounting Viney’s job on Cunnington and Gawn’s dominance in the ruck, Oliver was Melbourne’s best player in this game, with 33 disposals, 10 clearances, 21 contested possessions and eight tackles.

Scott Thompson has been a fantastic servant to North Melbourne over his whole career. A defender who constantly matched up on bigger opponents, Thompson often struck a nerve with opposition supporters (and sometimes players). Who can forget the famous headlock Barry Hall put Thompson in after one-to-may niggles. I think he would still be in it, if it weren’t for his team mates intervening.

The one thing you cannot question about Jordan Lewis is his toughness. I don’t think anyone who saw the moment he was collected by Josh Hill at what was then Etihad Stadium, would dispute this. Some people I talk to still maintain they thought he was dead. Coming from a team that had won four premierships in recent history, Lewis understood what it took to create a winning culture. He stepped into Melbourne to provide maturity, leadership and experience to his younger teammates, which no doubt contributed to their run into the finals in 2018.

It was fitting that the two tough nuts clashed on a few occasions, with neither seeming to give a crap that the other was retiring. True competitors, no doubt in the old days they would have shared a beer in the sheds after the game.

It definitely wasn’t Ben Brown’s afternoon. The Coleman medal fancy just couldn’t find enough of the footy. He somewhat turned it around and gave Jeremy Cameron a decent enough target with a couple of goals. Ultimately I think the continued development of Larkey and Zurhaar will only benefit Brown. Sure, they will demand more of the footy in their own right, but I am sure Brown is looking forward to the day the opposition isn’t dropping three players back onto him.

What is it about Braydon Preuss? He promises so much but once again failed to deliver. I still don’t understand why Melbourne recruited him if they weren’t going to play him predominantly as a ruckman. Surely it’s a weighted equation. If Preuss can get it together and allow Gawn to spend more time forward then that benefits Melbourne more than Preuss being dead weight in the forward line and Gawn being the premier ruckman unable to hurt the opposition in the forward half.

THE DEATH OF THE HANDBALL

I want it noted that these two team absolutely butchered the footy in the most simple of situations today. Even on a windy day, surely you can be expected to hit a two-metre handball with little-to-no-pressure. It’s ironic that the great Polly Farmer would pass away recently, a man who helped revolutionise the game through the exploits of the handball, and these two teams would show just how poorly some players still are at arguably the simplest skill in our game.

Hard to believe this game almost had two Mark of The Year contenders. First there was Fritsch in the first quarter who took a nice ride and pulled down an absolute ripper. Then Tarryn Thomas almost did the same, at the opposite end in the second quarter and then again in the centre square during the last! Even though Thomas failed to bring down his attempts, there cannot be any question that these two players will be putting their hands up in future years to claim one of the game’s most controversial awards.

I’ll tell you what, this game ended up being an absolutely ripping contest. Right up until the last minute, these two teams threw everything at each other. It was enjoyable to watch and see the love and respect they each had for their retiring teammates.

Not much more can really said about each team’s season that hasn’t already been said by the majority of pundits, or will be said in the chasm that is the bye-round before finals.

All I can really add is that both teams have shown enough to offer their fans hope for next season and beyond. Whether or not that is a cruel tease, will be up to them and if they put in the required work to achieve better results in the future.

I’m crossing my fingers for both teams.