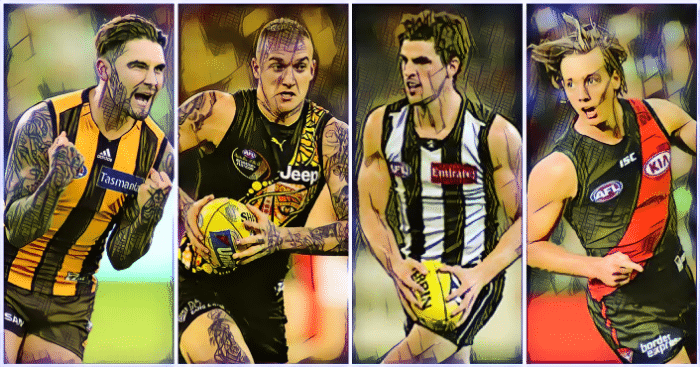 Mongrel Of The Year Votes – Round 22

It was a weekend which churned out two of the games of the season, with seismic consequences for the top four, while the final two spots in the top eight look to have been all but sewn up. There’s been further seismic consequences in the Mongrel of the Year Award, but unfortunately your correspondent is currently overseas and as a result cannot give this award the proper attention it deserves. Instead, the next fortnight will simply see the votes reported and a brief wrap up at the end covering the leaderboard. While it is disappointing this award won’t be wrapped up in style, I figure this is better than nothing. So without any further rambling, here are Round 22’s Mongrel votes:

As you can see, a big week for the leaderboard. There are now seven players who can either win the award outright or tie it, and depending on how the weekend plays out we could have as many as many as six players sharing the award between them. Boak hasn’t polled votes for three weeks,  with Port having looked likely to play finals and now looking more than likely not to, and Kelly hasn’t polled at all since Round 15, with his fall off mirroring Geelong’s big form slump.

Bontempelli has almost had to take a back seat at the Dogs to Jackson Macrae, who has come home with the wettest of sails to now be a genuine contender for this award. Bont was more than handy on the weekend but Macrae has simply been outstanding, and while he is probably the least heralded of the Dogs’ midfield trio, he’s also arguably had the best season.

It isn’t often that players are best on ground in losses, but in Geelong’s heartbreaking loss to Brisbane, Dangerfield’s influence on the contest was so dramatic that ignoring him would have been a slight on a player who has certainly not had as good a season as he has in those gone by but is still very much in contention for this honour, and much higher too.

Fyfe’s impact on Saturday night against the Dons wasn’t quite to the level he has been in the past, and so he misses out on votes, but his record against Port Adelaide is excellent, and he shapes as a very good chance to share this award with a player he’s likely to match up on at some stage on the weekend in Boak.

Martin’s first two months of the year were well, well below his lofty best, but since then his form would indicate he’s been one of the form players of the competition. Though ineligible for the Brownlow, he’s a good chance of sharing this award too, having kicked six goals against Brisbane in their last encounter, though admittedly that was a very different Lions side.

The rest of the leaderboard are out of the running for this award, although there are some excellent players in the mix. The only player to have resent votes on the weekend though was Kennedy, whose best on ground performance against the Dees sees him into the top 10.