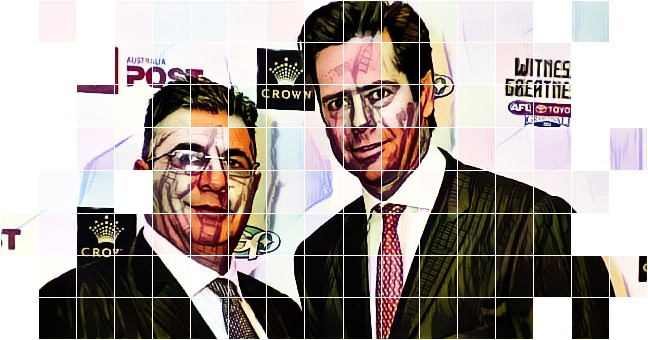 It has been five years since Andrew Demetriou, the man labelled a “benevolent dictator” by Hawthorn President Jeff Kennett left the most powerful post in football. Since Demetriou sailed off into the sunset amidst the chaos and dark clouds of the Essendon debacle, the AFL’s system of governance has changed significantly. No longer is it the Demetriou dictatorship.

In the Demetriou days, the clubs would continue to bemoan, led by the quotable Kennett who enshrined Demetriou with the dictator tag, that the clubs were powerless to the AFL’s rule.

“We’re given information and are not allowed to take it away. We are a controlled group of individuals. It’s the best show in terms of sport in Australia but to think the shareholders, being the 16 or 18 clubs, have a genuine say is an absolute myth.” – Jeff Kennett in 2011.

The image of Demetriou as an arrogant overlord and to some clubs, a bully, stuck with the former league chief for the entirety of his tenure. Perhaps until he – and the AFL – lost complete control during the all-consuming supplements saga just as Demetriou was handing over the baton to then deputy Gillon McLachlan.

However, “Vlad” as dubbed by Essendon icon Kevin Sheedy in references to the Wallachian 15th Century ruler, always refuted any accusations of arrogance.

“I don’t think you should confuse trying to be decisive and acts of leadership with being arrogant. I’d rather be decisive and sometimes that decisiveness can be unpopular decisions to be honest, but we are in the business of trying to make decisions.” – Andrew Demetriou in 2013.

Indeed, Demetriou could not be accused of shirking a decision. Even if that occasionally left him open to making some howlers, some even non-Meatloaf and dwarf related. But the Demetriou reign on the AFL was undoubtedly successful in terms of key metrics like broadcast deals and attendance. There have certainly been worse dictatorships throughout history.

The “benevolent” aspect of Kennett’s jibe also should not be discounted. Demetriou did act in the best interests of the clubs especially through his role in lifting the very sick Port Adelaide from its death bed and aiding the Demons in their darkest hours.

However, the worst period in Demetriou’s management was the increased McLachlanisation of the AFL when a long thought-out succession plan was nearing the point of crescendo.

The Essendon supplements saga and the Melbourne tanking investigations were largely managed by then deputy Gillon McLachlan and were completely botched by the AFL. The AFL was ruled by indecisiveness and managed outcomes rather than by strong leadership. While, Demetriou was still operating under his guise of resoluteness despite no longer being on top of all the facts and detail. A particularly embarrassing example being when he affirmed that James Hird would not be paid throughout his AFL suspension.

“If there is one thing I will go to my grave on, I know 100 per cent the AFL is not paying and I know that Essendon is not paying.”

And he was completely wrong.

Although, McLachlan’s alleged comments, noted by then ASADA CEO Aurora Andruska, in a meeting with the anti-doping body in 2013 are even more damning.

“Take points off Essendon… get outcome we need. Take bits out that might compromise what we need.”

Something was compromised alright.

Meanwhile, the tanking investigation, overseen by McLachlan, lacked the Demetriou decisiveness and penalised Melbourne for being not guilty of tanking.

“And overall people respect the fact we make decisions. We don’t procrastinate or daily-dally, or try to spin something.” – Andrew Demetriou in 2013

That plainly cannot be said about McLachlan’s AFL. Kennett’s claims that the clubs have no power also can no longer be said during his second stint as Hawthorn President while serving under a McLachlan-run AFL.

A modern politician serving in a democracy trying to satisfy vested interests rather than an all-powerful dictator.

The clubs have far more say in the way the league is run under McLachlan’s leadership, or at times, lack thereof.

The clubs, led by a more powerful Eddie McGuire at Collingwood, delivered the head of AFLX as McLachlan was not strong enough to combat McGuire’s microphone.

However, non-Victorian clubs feared that they would be disadvantaged by a mid-season trade period. This is because they believed it would be difficult to attract players from the opposite side of the country to shift their whole lives and move in the space of a week. The weaker clubs too were fearful as they thought a mid-season trade could cripple them. Whereas, Eddie McGuire was “meh” about the idea when asked about it on Triple M. Say no more.

State of Origin received no support from the clubs when raised at meeting with club executives earlier this month. And has thus been doomed. An AFL Reserves Competition received similar treatment and so, to the backburner it went.

McLachlan’s consensus approach can provide as a safety net that stops poor decisions from getting up – something that was not the case under Demetriou, but it can also cause problems.

AFLW’s expansion has been accelerated far too quickly due to the keenness and demand of all eighteen clubs to get involved. Despite this willingness not being present by some of the now desperate clubs when AFLW was being established. The AFL is now in the awkward position of not being comfortable enough to properly expand the draw but still increasing the number of teams by the year. You either expand fully or you don’t – make a decision.

McLachlan’s depiction in the recently aired The Final Quarter documentary that explores the minefield of the booing of Adam Goodes was particularly hurtful to the CEO. His inability to decide on a clear message, when dealing with a divided football public and AFL Commission, meant his indecisiveness was on full display and managed to anger both camps.

Unfortunately, that is an all too similar theme for CEO Consensus and his indecisive democracy.

Now the game’s dictators are outside AFL House.