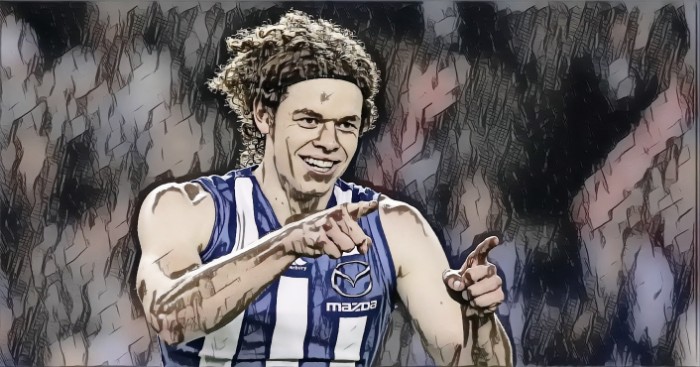 Seven days after posting their lowest ever score, North Melbourne came out breathing fire, blowing a disappointing Power apart with a scoring masterclass. For a Port Adelaide team looking to entrench themselves in the top eight, this was a pathetic performance, one that severely dents their premiership aspirations but also puts the blowtorch onto coach Ken Hinkley.

Here are the Big Questions stemming from North Melbourne’s 86-point destruction of the hapless Power.

HOW FAR CAN THESE YOUNG ROOS GO?

A team with so much potential, and with plenty of room to grow, Rhyce Shaw has inherited a team on the rise. Holding pick seven in this year’s draft, the Roos are stacked full of young talent, and their best players are all in their prime. With Scott Thompson hanging up the boots, the oldest players on North Melbourne’s list are Shaun Higgins and Todd Goldstein, arguably two of the Roos most important players despite their age, and with no drop in form apparent from these two, North can really make a run should they hold onto both this off-season.

With Brown, Larkey and Zurhaar combining for a lethal tall/small forward line tandem, and a defence that is equally capable of rebounding with speed, efficiency and dour defensive pressure, it appears that the only concern to Shaw and the list management team is in the ruck, with Tristan Xerri the only young big under Goldstein, a player who is still a few years away from being a consistent AFL player.

When Brad Scott made those brutal list culls on Harvey, Dal Santo, Petrie and Firrito, North Melbourne were setting themselves for a future period of sustained success. It seems that Scott’s vision is about to bear the September fruits.

WHICH IS THE REAL PORT ADELAIDE?

How has this team become so inconsistent? After two dominant victories over Essendon and Sydney, this was the perfect opportunity to consolidate their position in the top eight against a team that kicked a solitary goal last week against the Cats. To then lose by 86 points was a simply atrocious effort. Having no answer to anything North Melbourne did, the Power produced possibly the most disappointing performance of the 2019 season. The stats were damning for Ken Hinkley’s men, who were minus 207 in total disposals, down 41 in marks, lost 18-8 for marks inside 50, had 21 less inside 50’s, and lost the clearance count 45-24, despite recording five more hit outs.

Performances like this one have rightly or wrongly placed the arrow directly back on coach Hinkley, who will undoubtedly face criticism for his decision to leave Scott Lycett in the SANFL, exposing Peter Ladhams to one of the competition’s most in-form ruckmen. Since the bye, support for Hinkley from Power fans has diminished significantly, with many supporters confused by the Power coach’s game style and decisions at the selection table, often dropping players who have been performing well and seemingly not selecting players when it is clear they make the team better.

Should Port Adelaide miss the finals for the fourth time in five years, chairman David Koch could make the decision that Hinkley is not the man to take this playing group forward.

WHY HAVE THE ROOS STILL NOT SIGNED TODD GOLDSTEIN?

These are the ruckmen currently on North Melbourne’s list. Todd Goldstein, Tom Campbell and Tristan Xerri. Campbell is a back-up ruckman at best, and 19-year-old Xerri is still raw and a few years away from making it on the AFL stage. So with this information at hand, and with the Roos not appearing to be focusing on recruiting another ruck, the question must be asked why the Kangaroos are yet to sign their best big man to a new deal? With reports North Melbourne have offered Goldstein a two-year deal, the Roos risk losing their former best and fairest and with no one waiting in the wings, with the Roos trading out Goldstein’s heir apparent Brayden Preuss in last season’s off season.

Tonight’s performance showed the AFL world that Goldstein still has plenty to offer the Kangaroos should they choose to re-sign, with his first quarter alone worthy of reward, with 12 disposals at 100% efficiency, six contested possessions, five score involvements and six clearances to go with his nine hit-outs. His full time stats are the stuff of legend, 34 disposals (at 88% efficiency), 19 contested possessions, 17 score involvements, 28 hit-outs and nine clearances.

If Goldstein decides to leave Arden Street, North Melbourne’s list management team will have a few options on the market, but none of the players available are on the level of Goldstein, and signing the big man will be critical not only for the immediate future, but for the next decade as Xerri develops.

The only other option North will have in the ruck is if Majak Daw is able to make a full recovery and play consistently in 2020, but that is one of the game’s great unknowns at this point, and even then, he is not a full time option as a ruck. Great for 15-20 minutes per game, but as the number one man, he is probably not the option.

WHO WERE THE PLAYERS OF THE MATCH?

This was such a dominant performance by the Kangaroos that selecting only a few players to highlight is unfair on the whole team, who collectively put together an even performance across the board. Any player not featured in this section will undoubtedly feel hard done by, but Rhyce Shaw will have been with each of the 22 players that took to Marvel Stadium on Saturday night. However, there were some absolute standouts from the Blue and White brigade, and these are the superstars that are most deserving of a mention.

Ben Brown and Nick Larkey, take a bow. The Kangaroos twin towers were simply unstoppable, combining for 15 of North Melbourne’s 22 goals. Now leading in the Coleman Medal, Brown produced the best key forward game this year, booting 10 goals in an outstanding display of tall forward prowess. His stats speak for themselves, 10 goals, 14 disposals at 92% efficiency, 11 score involvements, six marks, all of them inside 50, and just one clanger make for the perfect game.

Rising star Larkey also had a night out, and like Brown, Larkey put together his best game in North Melbourne colours, kicking five goals playing second fiddle to Brown. All of Larkey’s 11 disposals were effective, and his seven marks were a team high. Nominated for the NAB Rising Star award in Round 16, Larkey, who is still just 21 years of age, is a key forward that the Roos will build around for the next 15 years.

With both Goldstein and Shaun Higgins entering the Arden Street retirement home, it is remarkable that these two are still at the top of the tree for Kangaroo superstars. With North Melbourne’s midfielders wreaking havoc on the Power, Higgins was the outside ball user to compliment Ben Cunnington’s contested beast. Gathering 38 disposals at 78% efficiency, Higgins was one of the main avenues to push the Kangaroos forward, recording a team high nine inside 50’s and taking seven marks through the middle of the ground. Higgins still has a few years left in his tank, and will be a key figure in the development of North Melbourne’s next generation of midfielders.

he has once again increased his average disposals per game, this time hitting 28.1, and it’d be markedly higher had he not been injured in the first quarter of the Round 12 match against Gold Coast. If you remove that game from the equation, he is right at 29.93 touches per game – an amazing achievement at a pint where many players are in clear decline.

The lone Port star fighting against the Kangaroo onslaught, Boak was clearly his team’s best, in an effort that will surely get his name stamped into the All Australian team. Playing in the trenches, Boak had no support and was forced to fight on his own, with 28 disposals only bettered by Dan Houston, a player who was constantly under siege. It was an all-round terrific midfield performance from the former skipper, who gathered 19 contested possessions, six tackles, eight clearances and seven score involvements. If the Power are to regain their place in the top eight, they will need to once again rely heavily on Boak to lead them into battle.

They shouldn’t have t reply on him like that, but they will.

Like Shaun Higgins, midfield beast Cunnington was one of the main beneficiaries of Todd Goldstein’s marvellous ruck work, and Cunnington’s contested efforts were instrumental in North Melbourne being able to gather so much of the ball. Collecting 37 possessions, 20 of which were contested, Cunnington fired out 28 handballs, mostly while under a pack of players. Underrated by many people not associated with North Melbourne, it will be efforts like this that will ensure that Cunnington is finally able to step into the limelight and get the credit he deserves.

WHO NEEDS TO IMPROVE?

It may have been easier to lump most of Port Adelaide’s team into this section, as almost the whole side put forward subpar performances. It is important to remember that each player that falls into this piece will know their display was average at best, and there is room for improvement if they work hard to correct their weaknesses.

A player in career best form, Darcy Byrne-Jones had what can only be described as a stinker on Saturday night. With so much ball entering Port Adelaide’s defensive 50, there was ample opportunity for Byrne-Jones to impact the contest with his trademark ball use. Instead, he simply couldn’t get near it, only troubling the statisticians a measly five times. Of those, only three of them were effective, and he failed to register a mark or tackle. Every player goes through peaks and troughs in form, but such a collapse in output from his regular 2019 performances will concern the coaching staff if it continues.

A player perhaps unlucky to come up against one of the competition’s in form big men, rookie ruckman Peter Ladhams was handed a lesson in the art of modern ruckwork by Todd Goldstein. Passing a concussion test in the second quarter, Ladhams recorded career low numbers in hit outs (nine), total disposals (seven), clearances (one) and marks (zero). It is possibly unfair for Ladhams to bear the full brunt of Port Adelaide’s selection wrath, however of the two ruck incumbents, it will likely be the fifth gamer that makes way for a returning Scott Lycett.

To be completely fair, Port Adelaide’s entries into their forward were abysmal and did the young key forward no favours. However, when a forward isn’t seeing a lot of the ball, it is up to him to get up the ground and get himself into the game. Todd Marshall tried at times, but he just couldn’t impact the contest at all, gathering paltry six disposals. Only 50% of Marshall’s possessions were effective, and he didn’t trouble the scoreboard at all. This will be a valuable learning experience for the third year forward who, at only 20 years old, still has more than enough time to continue to develop his game and work toward becoming Port Adelaide’s key forward target for their next period of success.