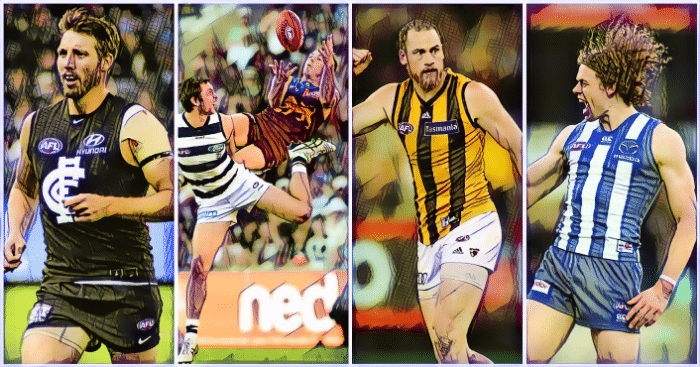 Ten Things I Learnt After Round 22

Dale Thomas has probably had his best year at Carlton.  And in the win against the Saints he was one of their best with 19 classy possessions,  Jarryd Roughead ended his “farewell” match with six goals.  And before you say it was against the Suns, how many other full forwards have kicked six against them this year?  Not many you’ll find.  These two players are clearly still at the level.  We all understand the problems created by trying to manage an AFL club list.  It may prove in the fullness of time to be the correct decision, but for now you just have to wonder if the call was made early.

I know the Demons have had a tough run with injury and many of their topline players had surgeries in the off-season which hampered their preparation.  But they’ve been lamentable this year.  Collingwood have had more injuries to key players and they’re still playing finals this year.  I believe the problems are deeper than that, and for this club to come back to finals contention, they’ll have to do better during trade period than bring in an extra defender and a backup ruckman who rarely gets a game.  They need forwards badly, and maybe a speedy midfielder or two.  If they fail to do that I expect them to still find themselves out of finals’ consideration for 2020.

3 – FOR THE FIRST TIME IN YEARS, BLUES FANS ARE UNHAPPY THE SEASON IS ENDING NEXT WEEK.

As a Blues fan myself, at this time of year for the best part of the previous decade, I would have lost interest by now.  Not only have we found ourselves at the bottom end of the table more often than not, it seemed a win after Round 11 was a rarity.  That is, of course, until we hopped on the Teague train.  Six wins from the last ten games have given the Navy Blue some momentum.  I’m just hoping we can take it into next year which now, all of a sudden, seems an eternity away.

4 – LINCOLN MCCARTHY HAD THE LAST LAUGH.

From 2012-2018, Lincoln McCarthy was a Geelong Cats listed player.  During that time, a combination of injuries and an inability to crack it in to a strong Geelong midfield resulted in Lincoln only managing 29 games wearing the hoops.  In just his first year at Brisbane he’s played 20 games, including the one-point win against his former foe.  It was decided by a spectacular mark and goal in the dying stages by Lincoln himself.  Whatever the circumstances under which he departed the cattery, the fact is it would’ve been extremely satisfying.  There’s nothing like beating your old team!!

5 – BOTH ADELAIDE CLUBS CLEARLY HAVE NO INTEREST IN PLAYING FINALS.

Aside from these two mobs completely obliterating my footy tips, I just can’t for the life of me understand how these two sides can be so poor with so much on the line.  Playing for a finals berth is the ultimate goal.  Adelaide’s effort against the Eagles the previous round had me seduced into thinking they were going to have a crack.  So, too, did Port’s easy dispensation of Essendon and the Swans in the last two weeks.  But alas, the crappy versions of the Crows and Power came back just in time to ensure another September without a South Australian presence.  For those who think Brad Scott will not have a job next year, I say watch this space.

6 – BEN BROWN MIGHT’VE COME OUT OF NOWHERE TO WIN THE COLEMAN.

Kicking ten goals in a game is a true rare feat these days.  All of a sudden, Ben Brown finds himself four clear in the race for the Coleman with just one week remaining.  I wonder if Ben could ever threaten a season with 100 goals against his name?  If so, when you consider the length of his set shot run-up, we may have to lengthen the season by three weeks.

7 – I WISH ESSENDON WOULD MAKE UP THEIR MIND!!

Have we ever seen a season where clubs have had a bigger gap between their best and worst than 2019?  I’ve already mentioned the Crows and Power.  The Pies have had some shockers but have been very, very good at times.  The Cats appear to have lost their mojo.  But how do you go from a game where you have 21 unanswered goals kicked against you to a win in Perth against a competitive, albeit inconsistent, Dockers team?  Oh well, good on the Bombers and they have made finals.  The AFL might be licking their lips at the prospect of two consecutive Collingwood v Essendon games at the MCG…

8 – DID WE WITNESS THE GRAND FINAL PREVIEW?

I think most agree that this would be a fitting Grand Final if it were to happen, but I guess Brisbane and Geelong will have a fair say in what transpires in September.  I do believe these two teams in Richmond and West Coast are the two best teams in the competition.  But a lot has to happen.  My money is on Richmond defeating Brisbane and all Top 4 sides finishing on 64 points.  This will put Geelong on top, and if Brisbane were to lose by a modest margin and West Coast defeat Hawthorn by under 40 points, they should still finish second.  A Geelong v Richmond final at the MCG favours Richmond, but if West Coast have to go to Brisbane, they’d need to bring their best.  Can you imagine what would happen if Geelong got their home final at GMHBA against the Tigers???  I can see a truckload of chicken manure on Gil’s desk at AFL house…

9 – THE GIANTS WILL REQUEST GAMES TO BE SHORTENED TO TWO QUARTERS.

The AFL have bent over backwards to accommodate the needs of their two pet projects, although it seems that the Suns have been relegated to the status of “problem child”.  So it wouldn’t surprise me if the AFL would grant a request from the Giants to stop games at half time.  I mean, if they can urge players considering a move to stay in Western Sydney, anything’s possible right?  But seriously, in the last fortnight the Giants have amassed a total of nine behinds after half time.  Even the struggling Suns, who they’re facing next week, have scored 9.3 (57) after half time.  So, by my calculations, if the Suns are within 25 points at half time against the Giants next week, it’s game on!!

10 – GOLD COAST SHOULD GET JARRYD ROUGHEAD AND DALE THOMAS FOR THE 2020 SEASON.

I reckon the Gold Coast Suns would be well advised to consider bringing in some experience like these two blokes into their squad.  They could do a lot worse.  Even Eddie Betts should be on their radar.  Look what Luke Hodge has done for Brisbane.  Food for thought!