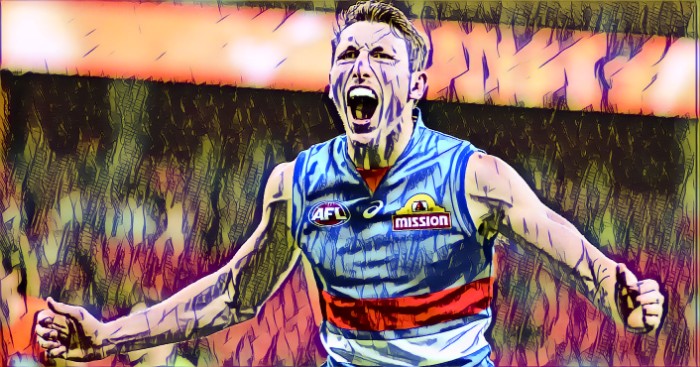 The stage was set for a mighty clash at Giants Stadium as GWS took on the Bulldogs on Sunday afternoon. The last time these two teams met at this venue was the 2016 Preliminary Final where the Bulldogs prevailed by six points against their more fancied rivals, and then went on to win the Premiership from all the way back in seventh position.

Once again the Giants were going into the game without full forward Jeremy Cameron, while Tim English was a late withdrawal for the Dogs.

For the Giants, the years since have been mixed. Many expected the beginning of a dynasty in which a side loaded with high-end draft picks would go on and win premierships, but it seems now that their best chance was in 2016 and their shock loss to the Bulldogs has taken a psychological toll. They’ve been good, but not great. With premierships continuing to elude the fledgling club, keeping their high-end talent is also proving difficult.

As for the Bulldogs, they’ve had a couple of indifferent seasons since winning the flag in 2016, and a win against the Giants would see them finish Round 22 in eighth position. With a winnable game in Ballarat against the Crows to come next week, they could find themselves playing into September for the first time since their premiership year – a scenario that seemed highly unlikely at the midway point of this season.

It was the Dogs who opened the scoring with a Tory Dickson goal at the three minute mark. Naughton goaled again two minutes later after a chase-down tackle, followed by another GWS backline error resulting in a goal to Schache. Just eight minutes into the game and the Western Bulldogs had a three goal lead.

Eventually the Giants settled and started to hit the scoreboard. The first quarter was a shootout with 12 goals scored in total. The Bulldogs did get out to a 24 point lead at one stage, but at quarter time the margin was just 10 points. GWS 5.3 (33) v Western Bulldogs 7.1 (43).

In the early part of the second quarter, the Giants began to get on top. They scored the first three goals of the quarter by the eight-minute mark, two of which came from Toby Greene who was beginning to impose himself on the game as he often does. The Dogs forward entries were being picked off with ease by Nick Haynes, a player who seems to have a sixth sense about where to place himself. Phil Davis also proved to be strong down back. After the eight-minute mark, tackling intensity increased and the scoring dried up until the 23 minute mark when Tomlinson slotted one to give the Giants a 15 point lead.

This seem to trigger the Dogs into action and within a minute they had their first goal for the term through Richards, followed by another one late in the term to Lipinsky. The Dogs were back within three points at half time.

For the Dogs, Macrae had 22 possessions as his streak of games with 30+ possessions looked set to continue and Whitfield had 20 for the Giants. Tory Dickson was the only multiple goalkicker for the Dogs with two while Himmelberg, Greene and Keefe had two each for the Giants. GWS 9.6 (60) v Western Bulldogs 9.3 (57).

The third quarter started with the Giants pushing forward several times for a paltry return of just four behinds. As is often the case when this happens, against the flow of play, a running goal from Bailey Smith at the six-minute mark drew the Dogs within a point. Amazingly, the Bulldogs kicked the next four goals of the quarter with goals to Duryea, Schache, Dunkley and Naughton. GWS on the other hand failed to even score a behind in what was beginning to look like a similar capitulation to the one in the snow at Canberra where the Giants failed to score a goal after half time. The Giants found themselves 29 points down at the last break, and after scoring a club record of 21 consecutive goals against Essendon in the previous round, at three quarter time the Bulldogs had scored seven unanswered majors.

Macrae was starring with 30 possessions as he enjoyed another week without having to deal with close attention. When will teams learn?

As an impartial observer watching the game, I was thinking surely the Giants would not allow a repeat of their previous effort against the Hawks and come out with intent to try and get back into the game. And, for the first 13 minutes, they had stopped the bleeding and kept the Bulldogs goalless but were still unable to add more than one behind to their own score. When Bailey Dale broke the deadlock, the lead was 35 points and the result was pretty much a foregone conclusion from that point. The Giants rolled over and allowed another four goals for the quarter to Lloyd, Schache, Lipinsky and Dale. The final score was GWS 9.11 (65) v Western Bulldogs 19.12 (126). Macrae finished with 39 possessions in another sterling performance.

For two consecutive weeks the Giants have been goalless after half time in a stark indication that this team is definitely not the team many thought they were. Yes, they have injuries, but there is something fundamentally wrong when you play four quarters of football without scoring a goal in two consecutive weeks. I’m sure Leon Cameron is scratching his head wondering how things have ended up this way. And I’m sure the powerbrokers at the club might be questioning his tenure when you consider where many thought this club would be. They get some relief when they face the Suns next week, who are just waiting for the final siren to sound on a season they’re very ready to put behind them. This followed by a bye and a very likely home final to follow. They’d seriously want to get their act together by then or else the embarrassment may continue.

The Bulldogs have now slipped into the eight and are a game clear of Hawthorn, Adelaide and Port Adelaide. Next week they face the Crows in Ballarat and a win guarantees them a finals berth. The Bulldogs’ recent form would suggest they’ll be too strong for a very inconsistent Adelaide, and it could be an interesting first week of the finals if the Dogs get through and face Collingwood in an elimination final.

This game raised questions, and not just for the Giants.

Could the Dogs go all the way? They’re playing a style at the moment that seems as though they are equipped to take on the best the league has to offer. their mids are playing unbelievably consistent footy, with Macrae and Dunkley compiling the kind of games that ease the burden on Bont to perform at his highest level every week.

Where do performances like this sit with Stephen Coniglio? Surely he has to be watching this team capitulate so meekly and it is having an impact on his thought process.

Could Nick Haynes make the All-Australian team? He should be in the squad of 40 at the very least. It’s scary to think where the Giants would be without him and Phil Davis this year.

Whilst many are patting others on the back for the ability to recruit big names to their club, is the Dogs’ acquisition of Sam Lloyd one of the best pick ups of the year? He’s not missed a game and has just hit 35 goals for the season.

If the Dogs can win again next week and secure their position, we could see a rematch in week one of the finals at this very venue (assuming Essendon lose to Collingwood). This would have to terrify GWSIt’s been a pretty happy hunting ground for the Dogs, and whilst many teams would not want to travel in the first week, I am looking at the Dogs and thinking they would welcome the opportunity to head back there.

And if these pups make the finals… will they be able to make some noise? How will they stack up against Richmond, or West Coast? The Dogs play a style unlike any other team at the moment. They are the fly in the finals ointment… the sand in the finals vaseline. They’re barking, and they may be about to bite.