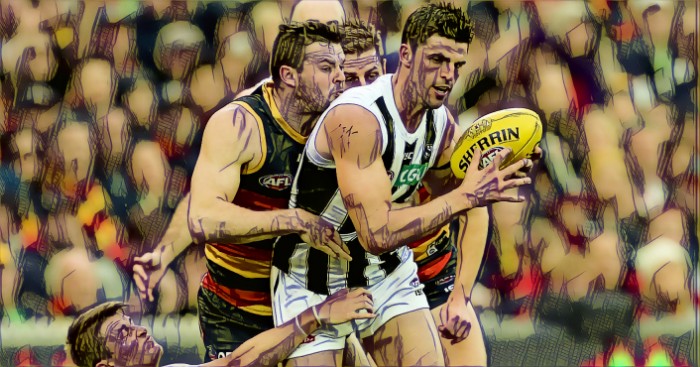 I usually write the good, bad and ugly reviews on here because I like to find a smattering of both for each team, and usually I can, but because I expected so much from the Adelaide Crows this season, and all they’re delivering is garbage, I find it hard to see positives.

Even in someone like Darcy Fogarty, who is brilliant, I can see some things in his game that I’m not really digging at the moment, so rather than this be the regular Good, Bad and Ugly review, I’m going for something a little different that probably won’t make me as annoyed to write.

This was a belting. It was one team who switched on and the other who switched into the form of the Gold Coast Suns at their worst. The Pies were brutally efficient and the Crows were lacklustre and, at points, insipid. Collingwood were full of run, full of enthusiasm and full of the will to win.

The Crows were full of shit, making a mockery of any promise they’d shown to this point of the Year.

This was a 66 point win, but it felt like so much more, and even with some of the other recent beltings in the league, I have not been as disappointed with a result the way a team played as I am with the way the Crows played in this one.

Of course, I am yet to watch the Port Adelaide debacle against North, so that may change.

Please allow me to introduce myself – I am a man who thought Adelaide was a lot better than this.

As a matter of fact, I really thought, with the talent possessed by this team, they could return to their 2017 form and contend. And my ultimate shame… I thought they’d win the flag this year, and went on record with it. I know… I’ll have some explaining to do after the season.

Please allow me to introduce myself again – I am an idiot.

It’s funny how this game can make idiots of the best of us. It was only a couple of weeks ago people were writing Collingwood off. Amid a rash of injuries, they were dropping games to the Hawks, Giants and Tigers. They looked shot and despite a gutsy win over the reigning premiers, people were jumping off the Pies in terms of their premiership chances.

Please allow me to introduce you to them – they’re bigger idiots than me.

The Pies travelled to South Australia on a day that could not have got much worse for the two big footy teams in town. It was early last year that Collinwood made their stand at the Adelaide Oval, powering past the Crows to record an outstanding win, and kick-starting their season.

Well, it’s been well over 12 months since that win, but the result this time was the same – a Collingwood win over a disappointing Adelaide Crows unit, only this time the Pies were much more impressive, and the Crows much, much worse.

Several times throughout the broadcast, Jonathon Brown remarked that the Adelaide Crowd was incredibly subdued. Well, I have to ask – what did they have to cheer about?

Adelaide were completely shut down by the Magpies, and combined with their own reluctance to take a chance, the Crows shot themselves in the foot in terms of their inability to create anything remotely resembling run-and-carry. And heaven forbid they were actually able to spot up a leading target.

The Pies squeezed them, poked and prodded them, knocked them down, rubbed their nose in it, and dared them to make a play – and the Crows refused to try. Early on in this game, you could see the Pies walking tall – they knew they had a team down on confidence on the ropes.

So they started pummelling them, and they didn’t stop.

Hey, nice alliteration…. that Walkley Award can’t be too far away now.

Maybe the Pies’ ability to hit targets on the lead was a symptom of the terrible defensive pressure from the Crows, but the Pies forwards feasted on the delivery this afternoon. Jamie Elliott was the preferred target, and he saluted with five goals for the night, proving that he is far from a spent force at the highest level.

But there were others making the most of the ample time and space the Crows afforded them. Will Hoskin-Elliott, Trav Varcoe and Josh Thomas all had a great day out as they got on their bikes, secure in the knowledge that if they got an inch of separation, their teammates would hit them lace out.

Taylor Adams, Scott Pendlebury and Adam Treloar (who was great early when the game was there to be won) wandered through the centre and had copious amounts of options available to them by foot, seemingly every time they got a touch. The Crows midfielders looked slow and disinterested in the defensive aspect of the game, and as soon as the blokes like Treloar and Pendlebury realised that, they started to look to exploit it.

The Crows were chasing tail for the whole game, and concerningly, they were chasing it slowly. The result was a huge 19 marks inside 50. In contrast, the Crows had just eight.

I heard a story once that someone had chased after Scott Pendlebury and yelled an insult at him.

“You suck, Maynard!” came the insult.

Pendles made sure he tracked down Maynard to let him know he sucked. A good captain relays pertinent information.

So you have this bloke who looks slightly like Pendlebury running off half back, and wouldn’t you know it – he racked up Pendlebury-like numbers in this one.

Maynard basically did as he pleased, compiling 30 disposals at 83% as he sliced through what little pressure the Crows could muster. He took 12 marks and snuck forward for a goal as well as nobody opted to even try to lockdown on him. I mean, he’s only disposing of the ball at over 80%… why would you try, right?

I’ll get to Tom Lynch soon, but the work of Greenwood to take him out of the game was excellent. Lynch’s ability to work up and back usually provides the Crows with two or three options in the same string of possessions, but with Greenwood trailing him closely, Lynch could not find any space to operate.

It has been a year where Greenwood has either played off half back, or tagged a midfielder, but this time he was tagging a designated forward, and his influence on this contest is measured by how little influence his opponent had.

Speaking of Pendles, this bloke has enough time to make a cup of coffee sometimes between taking possession and disposing of it. He’s been playing footy at AFL level for so long, yet no one has decided that they’re going to attack him every time he touches it. He cocks that handball, changes direction, turns around in a circle…

… and he’s still standing all by himself!

This was a vintage Pendles kind of day. 34 touches, ten marks and ten score involvements is the sort of stat-line that made him one of the best mids ion the competition for so many years.

I thought that Pendles may have given up the captaincy at the start of this season. He’s kind of at that stage where blokes start saying “I just need to concentrate on my footy” but it seems that he takes official leadership in his stride.

And as an aside, I’m not sure if you noticed Pendles offering Matt Crouch the ball, as though he was saying “here you go… have yourself a touch” at the end of the third quarter. Funny… but that’s the sort of thing players tuck away and never forget.

The Crows need a clean out. As I write this, they are sitting eighth and will have the chance to play finals if they beat the Dogs in Ballarat next week.

But they don’t deserve to play finals. You know what they deserve – to finish eleventh. They deserve no rewards for their performance this season. Their pick-swap with Carlton was a running joke for a while, but now it turns out the Crows are a joke… who don’t run at all – at least defensively.

Rory Sloane looked slow. It was great he got out there after copping a whack in the eye last week, but maybe he should’ve taken the week off.

Bryce Gibbs is finished. He looks tentative, unsure and completely lacking confidence with the ball in hand. Where is the guy who was supposed to be the cherry on top of the Adelaide midfield? He had eight effective touches.

Sam Jacobs will be moving right along, irrespective of what he said about wanting to stay. Today was evidence that two rucks in this team simply do not work, and with Reilly O’Brien having played so well in his absence, and also having just extended his contract, Sauce needs to start looking for another option.

Eddie Betts is done as well, but as he has time on his contract yet, I fully expect him to have some SANFL time next year, similar to Jarryd Roughead in the VFL this year. Another week against a top eight side, and another game where Eddie didn’t deliver. If Adelaide could play Gold Coast every week, Eddie would still be a top flight small forward.

Rory Laird turned the ball over more than I remember him doing before. The AFL app is telling me he only had four turnovers – I’m calling bullshit.

David Mackay, what sort of bloke runs into trouble and rather than take the tackle, hands off to a stationary FIRST YEAR PLAYER and lets him take the hit? That’s what Mackay did to Chayce Jones. What a teammate! And what a way to get the young fella to trust you.

Tom Lynch played the worst game I’ve seen him play this season. His effort to tackle Rupert Wills in the middle in the last quarter… he won’t like seeing that on replay.

I feel sorry for blokes who actually put in on that side. Brodie Smith, Brad Crouch, Daniel Talia… all hard workers.

I actually liked Tex’s efforts contesting today. I would never, ever question his heart, but I reckon next season we see a leaner version of him, and that little bit of extra speed and agility may make him a force to be reckoned with again as opposed to someone who threatens to have a big impact, yet never really does.

Look, he is the most promising player they have at the moment, but all he is doing is offensive stuff. You reckon at some stage he might lay a tackle? Sticking your arm out as an opponent breaks through isn’t good enough.

As good as Fogarty is, you can’t go three weeks at this level and not lay a tackle. Not even Daniel Menzel gets away with that shit.

So the Crows head to Ballarat next weekend to play the Bulldogs. I the Doggies win this weekend against the Giants, they’ll be in eighth position, and I really can’t see Adelaide knocking them over in the last round.

As for the Pies, they get the Anzac day rematch against the Bombers – remember that one? The umpires not calling holding the ball decisions and the players all stopping? I remember it vividly.

Let’s hope the umps are in better form than last time.