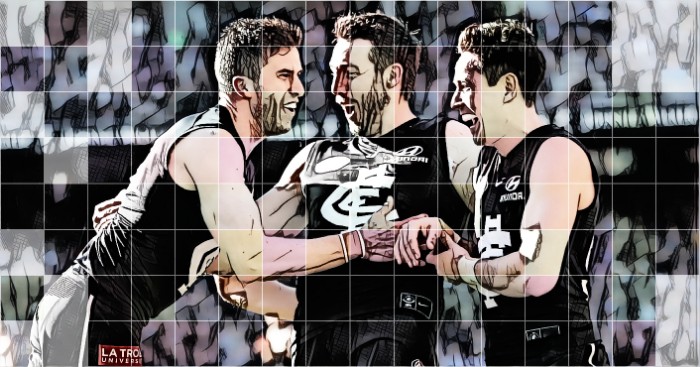 Partly by chance (hey Brisbane) and mostly by design, the penultimate round of the 2019 AFL Home & Away season has some mouth-watering, top-of-the-table lineups in the lead-up to September. But for this freshly-minted Mongrel writer, the Blues doing battle with St Kilda on a gloriously sunny MCG afternoon had more than enough sub-plots to make things interesting.

Carlton, gleefully fresh off the appointment of their coach David Teague, have been a new team since he took over from the hapless Brendan Bolton and lead them to victory over now-serious premiership chances Brisbane in Round 12.

On the flip-side, St Kilda seem to be playing much closer to their potential since Brett Ratten took over as caretaker following Alan Richardson’s exit back in mid-July. Although the W/L ratio hasn’t been as emphatic as Teague’s, the Sainters seem to enjoy playing under the former Carlton coach (see, sub-plots!), while he clearly believes he could take them into 2020 and beyond.

Add this to Daisy Thomas announcing his retirement this week, Dan Hannebery and Mitch McGovern pressing their case for being worthwhile (and expensive) additions to their respective clubs in 2019, and a couple of exciting young playing lists eyeing a finals tilt next year, today’s game had all the makings of a rock solid afternoon of footy.

Was that the case? Let’s find out as we climb aboard the #TeagueTrain Express:

I reckon we spend just a little bit too much time bemoaning the “state of the game” these days. Rule changes this, defensive coaching that… It’s real easy to ride the bandwagon of hating on the greatest sport in the world, but today’s match (between the 13th and 16th teams on the ladder no less) was a belter. The skill level at times was a little lacking (to be expected), but it was also fast-flowing, with both teams showing a hunger that made you quickly forget there was little for them to play for beyond pride. The momentum (and lead) changed a heap of times throughout the match, there was some truly spectacular goals kicked, and it was in the balance right up to the final minutes.

The late withdrawal of key defender Jacob Weitering (combined with losing Liam Jones to a fractured larynx last week) put some extra pressure on Blues backman Levi Casboult, but he seemed to relish taking charge down back. Not only did he keep Josh Bruce goalless for the entire day, he clunked 10 marks (nine intercepted, the equal highest of any player this year) of his own, and was an absolute pillar in the Blues defence. The Saints even tried shifting Jake Carlisle to the forward line in the last quarter to slow Casboult down, and although Carlisle managed a goal, it was too little too late.

What a formidable defensive duo these two make, one in the twilight of a magnificent one-club career at the Blues, the other just getting started after flying down from Sydney in 2018. It was announced earlier this week that Simpson has been offered a one-year extension to play on next year, and you would hope (and expect) he takes it. And when he does finally depart after a couple of the most consistent decades of footy at the highest level, he’ll be leaving the Blues defence in the very safe hands of Newman, who was easily one of the Blues’ best today.

I’ll be honest, as we approached half time I began to wonder where Marc Murphy was, and how much his place in the side had cooled under the enormous shadow cast by Patrick Cripps. Shame on me though, as the Carlton veteran stamped his presence on a tense third term that found the Blues driving forward without much success on the scoreboard. That changed with a classy banana goal from the pocket via Murphy that gave the team a lift at just the right time.

I’m sneaking Daisy up into First Class after playing his 100th game for the Blues today (making him one of the few to play over a hundred games for two clubs) ahead of his retirement at season’s end. One of the last remaining characters in the game, he put in another solid showing, and got a nice send off from the Blues’ 50,000-strong crowd at the MCG. Hopefully he gets to enjoy a few guilt-free wines at whatever functions he pleases moving forward.

I realise I’ve been pretty Carlton-focused in this write-up, the fact they won always helps, but it’s also because the Saints didn’t seem to have any real stand-out players in a more rounded team performance (with some notable exceptions back in economy class). One bloke who did manage to standout by proxy of playing pretty darn well on a future Brownlow medallist was Jack Steele. He laid a game-high 14 tackles, kept Cripps to only 22 possessions for the day and picked up 20 of his own. It was another absorbing contest following Cripps’ bout with Elliot Yeo a couple of weeks ago, and I can comfortably say both players can hold their heads high today.

If/when Carlton start pushing for September success in the next few years, this bloke is surely second in line behind Patrick Cripps as the most important part of that equation. Grundy and Gawn rightfully rank atop the AFL’s best ruckmen lists in 2019, but a fit and firing Matty Kreuzer has to be not far off. He manages to both monster opponents and move like a rover, and while Rowan Marshall worked hard to combat it, Kreuzer eventually took the honours in a hard-fought battle. He’s a scary proposition for any team, and essential for the Blues’ continuing success in 2020 and beyond.

The much-maligned and moustachioed Mitch McGovern is on something of a comeback trail following a strong showing against the Tigers last weekend. Early on in particular he showed signs of why the Blues are paying a few extra pennies for him following his exodus from Adelaide last year. And while Blues fans might look back on this year as a wasted one, with three goals to go with his two last weekend along with a couple of big grabs, you get the feeling he’s going to be dangerous in 2020 with a decent pre-season under his belt.

Here’s a bloke who in a more successful team you feel would get a few more plaudits than he does currently. The normally very accurate shot at goal should have bagged five today easily, but kept running in too close to the man on the mark. It’s a shame he missed a couple he’d normally kick, especially when your team only loses by 10 points, but the bloke is an exciting power forward, one you would hope only goes up from here as his team looks to do the same.

I wonder if Dan Hannebery and Mitch McGovern breathed a sigh of relief together after the game today. Both players moved on from their old clubs on big money at the end of last year, and both have had seasons they’re probably pretty happy putting behind them. On the bright side though, both have put in strong showings in the final few rounds of the season, and Hannebery’s work in-and-under today was a big part of why the Saints nabbed him. Even though 2019 isn’t even close to finished, it just makes the prospect of 2020 an exciting one – here’s hoping teams like the Saints and the Blues can get big pre-seasons in, and start knocking on that door.

So while I mentioned back up in First Class that despite the lower ladder positions it was a very entertaining game today, at times the skills on display definitely reflected the poor season outcome. There were some head scratching passages of play at times, occasionally taking on the feel of an episode of the Three Stooges or something, with some erroneous passages just escalating with each misfired handball, and with the crowd at times speaking for all of us watching thanks to some very loud groans. It’s to be expected though, and forgiven when the sun shines directly into players’ faces, or when Harry McKay snaps an incredible goal from 50m out to seal the game.

I (and I suspect most of the football watching public, and maybe even St Kilda) just don’t know where Jake Carlisle is at. Another big profile recruit for the Saints a couple of years back, he just seems to wander around games, neither here nor there. It’s a shame, he’s obviously a talented guy, but it just feels like his head’s never really in the game. Maybe St. Kilda’s next coach might be able to crack the frustrating code.

Last weekend was as inspiring a comeback as you’ll see, as the much-loved Saints midfielder played a huge role in their last-gasp win over the Dockers, returning after some mental health issues over the course of the season. Unfortunately he couldn’t back it up today, and while he and the club both recognise he’s not in great physical condition, you really felt it during the game. Maybe it’s just a case of getting him back out on the park and amongst the AFL environment before season’s end, but you have to wonder if another performance like today is going to make him feel better or worse for the run heading into what’s shaping up as a gruelling pre-season.

If today was a little glimpse into the crystal ball of AFL’s future, I think there’s plenty to be excited about. The Blues just look genuinely happy to be out there at the moment (seriously, go watch the press conference announcing Teague’s signing if you haven’t yet – the players bloody love him), and the Saints look to be in a similar position. They lack some of the elite midfield run of the Blues, but hopefully their new coach can lure some top tier talent to Moorabbin, along with massaging the struggling talent they already have towards their full potential.

Today’s game might not have been pretty at stages, but it was an enthralling one, and you get the feeling it’s because both teams feel like they have a lot to offer the competition in 2020 and beyond – bring it on.