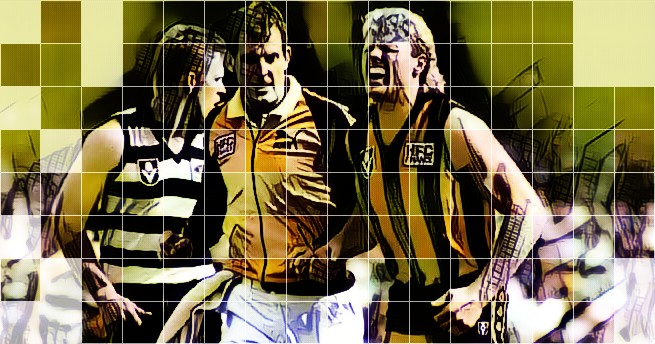 What is the greatest game you’ve ever seen?

Depending on who you follow, your age, and the style of play that appeals to you most, your answers will vary. For many, anything over 20 years old simply does not resonate – the play is scrappy and the kicking can be indiscriminate, but the contests are a little more willing, and there is a gladiatorial aspect of the game from that period that is, of not completely eradicated from the modern game, then well on its way to being extinct.

For me the answer is simple, and it probably says as much about where I was in life at the time as the game itself. I’ve always liked footy, and at this point in time, I’d always gravitated to Aussie Rules from a young age, but the 1989 Grand Final made me love football.

I originally planned for this article to cover the whole game, but that quickly turned on its head. Instead, I’ve chosen to cover the first couple of minutes – I’ll leave the book to someone a little better qualified, such as Tony Wilson, who is releasing a book about this very game later this year.

The game had everything, but before diving down a rabbit hole I may never escape from, there needs to be a little history.

I have not always barracked for Hawthorn… yep, I’m one of those people.

As a youngster, I was a North Melbourne supporter. As a matter of fact, up until half way through primary school, I wore royal blue and white and idolised players like Wayne Schimmelbusch, Malcolm Blight and Kerry Good… although my old man hated that I had such adulation for a player he dubbed the “Flying Nun” – always flying, always marking none.

The switch for me happened on a day North were playing Hawthorn at Arden Street, and in a story detailed for Patrons recently, the actions of a lone Hawthorn supporter with a pronounced lisp amid a sea of blue and white  taught me a little about dedication and courage. I became a Hawthorn supporter that day, and have been ever since.

I was on a bit of a high – a natural one at this time – and not just because the Hawks had won the ’88 flag and were running out for yet another shot at winning the big one. I was witnessing one of the toughest players in the game running roughshod over anyone who stood in his way.

His name was Dermott Brereton.

I remember the headline from the Sunday Herald Sun following Brereton’s classic hip and shoulder on Paul Vander Haar at Waverly that went a long way to turning the second semi final. “Demolition Dermie” it read. The caption to the three still shots that showed Brereton knocking Vander Haar unconscious read ”The perfect hip and shoulder”. I cut it out and kept it for years. I don’t know where it is now but I found another one on Google. I still love it. 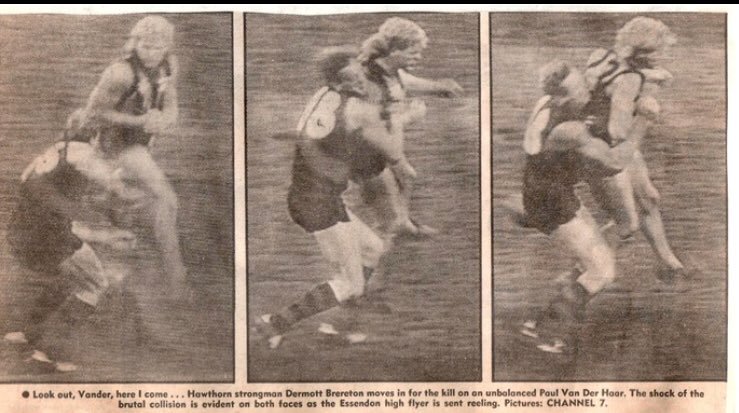 Printed in the Herald Sun, 17th September 1989. Image from Google

He’d being wreaking havoc all season, picking off players at boundary throw ins, crashing into both suspecting and unsuspecting opponents, and generally creating as much havoc on a footy field as one man can without being Mark Jackson.

Watching Derm at this stage of his career was a joy.

Whilst probably not as his best, form-wise, his influence on the game and profile as one of the most recognisable faces in footy was at its highest. The blonde locks, the strut, the willingness to bowl someone over, or ride his motorcycle up the front steps of the Metro nightclub… Derm was larger than life, and 16-year old version of me ate it up.

And now he was going to smash someone to bits in the Grand Final and put the Hawks in the driver’s seat – I just knew it.

And then it happened.

I was wearing my Hawks jumper with number 23 on the back as my dozen or so friends and I watched on my Dad’s TV. I was pumped and, as my Dad was out watching it with friends, we’d managed to acquire a few “long necks” from a particularly shady pub owner up the road. It was set to be a great day, but in one fell swoop, Mark Yeates turned the game on its head.

The siren rang, the ball was bounced and the Cats cleared from the centre through Andrew Bews, with Gary Ablett marking on his chest and converting from 50 metres in the first 30 seconds of the game, but as the ball sailed through for a goal, all eyes went to the centre of the ground, where Dermott Brereton… my hero, was lying on the turf, unable to draw breath.

Mark Yeates had vengeance on his mind that day, and came off the wing with eyes only for the charging Brereton. Derm looked up at the last second to see Yeates coming at him. It was too late.

“We’d played them earlier in the year. Mr. Brereton had damaged one of my testicles.” – Mark Yeates. Geelong 1980-90

“We had played Hawthorn in Round 9 at Princes Park, the game they ran over us. Brereton ran through Yeates at two boundary throw ins. Jumped into him with his knees, into Yeatesy’s ribs, just picked him off.” – Greg Wells Geelong Assistant Coach.

A plan was hatched.

“Maybe on the Tuesday of that week we were thinking about the teams and what we were going to do. Mark had the darks on Brereton for cleaning him up, because he missed a state game, and he was really proud about playing state footy. So he didn’t take any convincing. He was going to pay Dermott a visit.” – Malcolm Blight. Geelong Coach 1989-94

Apparently Derm was not content with “damaging one of Yeates’ testicles” as he had some choice words to say to him as Yeates left the field. Malcolm Blight wouldn’t need to give Yeates any more motivation to even up with the Hawthorn star.

“I just walked alongside (the stretcher), and badmouthed him. We did stuff like that in those days. – Dermott Brereton. Hawthorn 1982-92

The crash of bodies knocked Brereton to his knees as the Cats went forward, and try as he might, he was unable to get to his feet.

Alan Jeans was on his feet in the coaches box, bowever, pointing and issuing instructions. His star – his own battering ram was down, and he was hurt. This was not the way things were supposed to play out.

The game seemed to pause forever as Derm was helped to his feet. I held my breath as watched him gasp for his own, as I squeezed the long neck beer in my hand so hard, had it been a living creature it would have surely died.

Some of my friends laughed.

“The game’s over,” said another prematurely.

“Yeates came off the wing and went straight for Dermott Brereton,” said Don Scott on commentary as the Hawthorn trainers gathered around Brereton.

The Hawks around the field looked concerned. The Hawks supporters in the crowd looked petrified and alarmed. The 16 year old Hawks supporter with the long neck beer in his hand was in complete shock.

Yeates got Brereton before Derm could get one of them. They’d taken him out before the damage could be done to them, and if there was ever any doubt as to whether Dermott had intentions of his own, this own words put that to rest pretty quickly.

“I have to be brutally honest and confess that I wasn’t looking for Couchy at that first bounce. I just ran in off the line knowing there was four targets inside the centre square. Whichever one got in the way was the one I was going for.” – Brereton

But Brereton had the voice of the late Alan Jeans in his head. He’d targeted Brereton himself in the rooms before the game, challenging his star to perform.

“It may have happened to someone in your family, but today someone has a loaded gun and it’s pointed at your head. How do you respond?” – Jeans to Brereton.

It was a comment that has stuck with Brereton to this day. It was personal. It was direct, and it was unexpected. His coach had challenged him to rise to the occasion, and now it was Brereton’s turn to respond.

As he lay prone on the MCG turf, the words of Jeans echoed through his head.

“It cannot end here. This has to be the most important two hours of my life.” – Brereton

Dermott Brereton got to his feet with assistance and hobbled his way to the forward pocket, stopping to vomit on the way but refusing to come off as per Jeans’ orders. This, people, is the fine line between bravery and stupidity, and though history tells us that Brereton’s actions will forever be remembered as the former, just one more crunching blow in the next minute or two, and it could very well have been remembered as the latter.

After Jason Dunstall goaled to level the scores, Darrin Pritchard broke from the middle with the ball. He kicked long to the forward line where Brereton, still suffering but refusing the leave the playing field, backed up and took a mark 30 metres out from goal.

I’ve never screamed louder. Writing about it now, the hair on the back of neck is standing up. He went back, slotted a goal and the Hawks were in their way.

“The most thrilling thing I’ve ever seen.” – Robert Dipierdomenico. Hawthorn 1975-91

It’s been 30 years since the greatest game I’ve ever seen. I don’t think we’ll ever see anything quite like it again.

In the first few minutes, we saw everything that makes Aussie Rules great.

And above all, we saw courage.

Dermott Brereton got up, and set the scene for the greatest game I’ve ever seen.