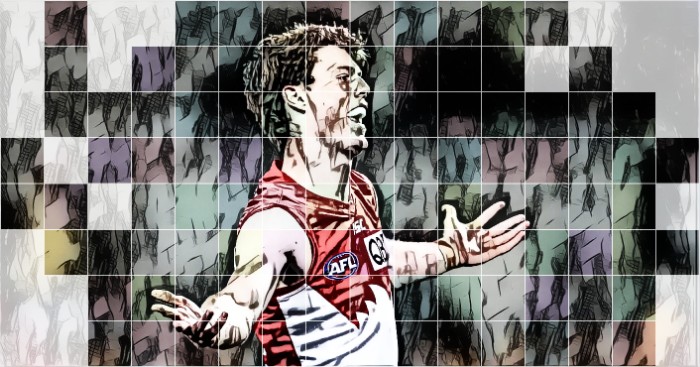 Usually a timeslot reserved for only the most exciting games of football, Friday night looked like anything but this week. Both teams out of finals contention. Cold, wet, and windy conditions, in front of a more than half-empty MCG. This game didn’t exactly inspire confidence of an exciting quality contest. At least there was no other sport of any significance, on any other channel, that someone would rather be watching…

But seriously, were there more seagulls at this game than supporters?

A note on the coverage of the game: With the amount of times that channel seven crossed to the stands, it was any wonder BT didn’t start commentating on Buddy or Roughead eating a bag of chips.

But let’s try and focus on the footy.

Sydney simply dominated the Demons, they kept them goalless for over 60 minutes of play, whilst kicking seven of their own. Despite being the younger team, the Swans bullied the Demons into submission with their tackling ferocity and appetite for the contest. Once they were in front, they looked like they were enjoying really rubbing salt into the wound, particularly the younger, more brash players.

Oh well, let’s dive in to the stuff that mattered.

Really looks to have come on as a player. Took it up to Max Gawn on occasions as well, particularly early in the contest. Aliir did a lot right tonight – contested well in the ruck, spoiled hard and still collected key intercept possessions. He followed up really well after the initial contest and actually showed some good maturity. Probably should’ve rewarded himself with a goal in the last quarter.

In a team full of kids this guy just stands up to be counted as an experienced contested beast. Often matched up against the opposition’s toughest competitors, Kennedy is just a warrior. I’m not a Swans supporter (or fan of any kind), but I have nothing but admiration for the likes of Josh Kennedy, even though he continues to play well against my team. A quality player who has conducted himself with the utmost class. Another standard game for Kennedy. Leading the game in clearances and leading the Swans for contested possessions.

Seemed the only truly desperate Melbourne player out there tonight. Oliver showed a clear desire to win the footy and propel his team forward. Continued to uphold his hard-working reputation. If only some of his team mates had the same level of intensity as Oliver, or returned to such a level of form.

Really solid game from Florent. And even if I didn’t think so, the commentators said it so often you would think he had 40 disposals and kicked five goals. It was a very good game and something he will be able to use to build his belief that he belongs in the conversation of Sydney’s best midfielders.

I didn’t really notice Lloyd in the first half. Did he do a Bobby Boucher and arrive at half time? Anyway, in the second half it seemed like he was everywhere. Clearing the ball out of the Sydney defence and spotting up long range targets with ease. Carving out holes in the swiss cheese Melbourne defensive structures.

Dominated the hit-outs which, when his teammates weren’t letting their opponents shark the taps, were very effective. Gawn had good presence around the ground and started to really get involved in the latter half of the second quarter. Unfortunately left the ground early due to injury but was more than serviceable tonight on the field.

Solid enough night at the office for Petracca. Continually pushed the Demons forward. I thought he put in some good one-percenters as well, with a hand in the way here-or-there. Even had a few hit outs for his troubles.

Good showing from Reid in the first half. A handful of goals and some good contests in the air. Obviously, he wasn’t going up against the elite defenders in the competition but you still have to beat who is in front of you. Faded after halftime in terms of serious impact, but was still handy forming a part of Sydney’s chains going forward.

I really like Blakey’s’ intensity. His tackle early in the second quarter and overall desire for the contest is first class. The effort for his goal in the third quarter and the follow-on was fun to watch. Blakey is still young and the numbers will hopefully continue to rise and reflect his efforts after another pre-season. Blakey is the sort of young recruit that gives older players like Josh Kennedy the desire to go around one more time.

I saw Robbie Fox have two disposals in a half of footy a few weeks ago against the Cats. The difference between that game and his game tonight could not have been much bigger.  A fantastic response. Fox played a game that shows he can perform at AFL level, even against a poor opposition.

Things just didn’t work out for Menzel tonight (mostly). He got little reward for effort for a lot of the night. His usual mercurial touches were seemingly unable to connect with teammates, for most of the night. The conditions definitely didn’t suit his style and you can forgive a player who has had four knee reconstructions being a little less than his best in the wet.

Sammy Sprinkler… Melksham scored the majority of Melbourne points, unfortunately most of them were behinds. Melksham is a crafty forward but had a seriously poor night in front of the big sticks.

Bruce McAvaney stating Melbourne “needed” the next goal at about the 4-minute mark of the opening quarter was very perplexing. He knew the margin was still under 20 points and that there was over 100 minutes of footy left, right? Sydney may have gone on to win comfortably but the notion that the game was already on a knife-edge when it was less than 10% complete is just too much for me to accept.

I don’t think I’ve seen a player kick the ball worse but still hit his target and get praise from the commentators. Ugly inside-out barrels, dribblers under opponents along the ground (in the defensive 50). He doesn’t kick it pretty, but Frost understood his limitations out on the field tonight and most of his kicks actually seemed to be effective. Went forward in the last quarter and looked lively as well.

IF YOU DON’T MIND, UMPIRE?

Midway through the second quarter Josh Kennedy gathered the ball on the wing and was tackled by a couple Melbourne players. The umpire subsequently blew their whistle to halt play. All players began setting up for a stoppage when they realised the umpire had called holding the ball, stating that Kennedy “dragged it in”. The only issue with this is that it only applies if Kennedy collected the ball while on the ground, which he wasn’t…. Kennedy was on his feet and tackled to the ground. This is surely a decision the AFL will admit was wrong.

And how about the deliberate rushed behind call? I’ve had discussions with a few friends and so far, I think I’m one of about five people who think it was actually a correct call. I wonder where the Sydney supporters fall?

BAYLEY FRITSCH – ONE KICK ONLY.

In a night of forgetful skill levels, the kick by Fritsch, late in the third quarter, to Jake Melksham (to set up yet another point) was sublime. Located on half forward towards the boundary and with not a lot of options, Fritsch picked out a fast-moving Melksham, streaming forward form the centre square, and nailed his chest with a low bullet between three Sydney players. It piqued my interest, and was about the best highlight for Melbourne for the quarter, outside of the courageous Harmes mark in defence.

I had a chuckle late in the game when Dane Rampe received a free-kick for being pushed into the goal post (Bruce McAvaney also picked it up). The last time Rampe had significant contact with a goal post he was almost costing his team the game.

A solid win for the Swans. An unremarkable game overall, but it will continue to fuel their belief of having the right mix of youngsters to take them back to September action next year. In a transitional year for the Swans and a rare dip out of the finals, they have really gone full bore on the shift towards the next generation and they can definitely see some green shoots just poking towards the surface.

Melbourne… What to say about Melbourne? Just a wasted year. Just get to the end of the season. Hopefully they have minimal surgeries in the off-season and come back to training in November ready to improve. I’m calling a mulligan for the Demons this year. Their last win was against Carlton, and only just. They have been competitive in games, but it is a big fall from a team that was one win away from a Grand Final last year.

And if you happen to be a lunatic who cannot get enough of the Swans v Dees, an additional 1900 words on the game from the old Mongrel is up on our patron site. $4.50 per month gets all long form articles.