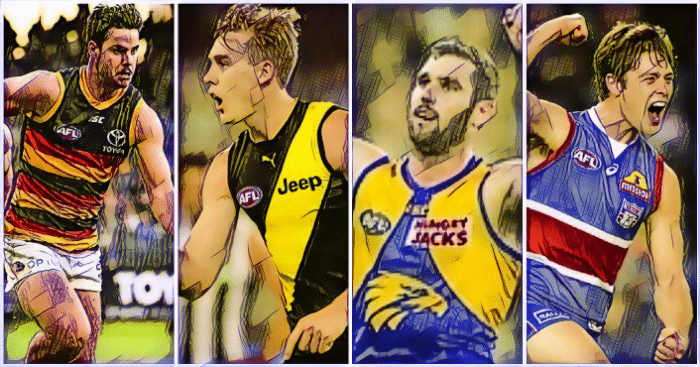 I mean, if you can put aside the record-low scores, the continuously confusing umpiring, the constant rule changes and the online vitriol we sometimes encounter (no names mentioned… you know who you are), then yeah, it’s a great time to follow footy.

As we head into Round 22, the race for the flag is wide open, with many believing we could see a Grand Final preview in one of two games this weekend. It’s not exactly like the AFL planned this – who saw Brisbane’s meteoric rise coming to this extent? Let’s call it good fortune and be happy we get to see the top four all clash in marquee games.

The Gabba is sold out and the Lions are roaring. The Cats are purring again after a comprehensive demolition of North. The Tigers are rolling and playing that irrepressible brand of football that swept them to a flag two seasons ago, and the Eagles… well, they just ooze class and look like they haven’t got out of third gear at times.

But there are other teams in the hunt and more things to look forward to.

The Crows v Collingwood is shaping as pivotal. North v Port holds a lot of interest. The Bombers v Freo has huge final eight ramifications as well. New coach v Interim coach in the Blues v Saints clash, the Giants looking to rebound and end the Dogs’ finals chances… and the Dogs looking like fire as we close the season. And there’s even genuine interest in the Hawks v Suns with Roughie hanging the boots up.

If only Friday night wasn’t such a fizzer, huh?

I hope Melbourne and the Swans pull out a big game here, but in the context of the weekend, we’ve got the worst game in the best timeslot, and it is probably the best advertisement for a fluid fixture over the last three weeks as there has been. Basically every other game has something more important to it than this one.

Aaaaanyway, onto some of the things I’ve loved recently.

THE FOG ROLLS IN
Un-Fog-Ettable… I should write headlines for Adelaide newspapers. It’d actually be better if Darcy Fogarty had not been the Fog-otten man at Adelaide this season, and had a few more games under his belt, but I have been on the Fogarty-Train since very early in the piece, and it’s nice to see him start to chug along again.

His five goals against West Coast demonstrated that he can mix and match it with some of the best defenders in the caper. He took marks and kicked goals on both future All-Australian Captain, Shannon Hurn, and one of the most underrated defenders in the game, Tom Barrass, in a display that made you wonder where the hell he’s been all year?

The SANFL… occasionally playing in defence earlier in the season is where. Ugh!

Kane Cornes today stuck up for Don Pyke not selecting Fog earlier in the season, claiming it was Fogarty’s own fault he was in the SANFL. For mine, when you have a thoroughbred, you don’t throw him in with a bunch of brumbies to learn how to race. Fog deserves to be nurtured and playing with the best, and once he was thrown in amongst them, well… the proof is in the pudding.

So, Fogarty’s emergence basically kills off the chances of the Crows retaining the services of Josh Jenkins next season. I still think Jenkins has a bit to offer a team as long as the whole forward set up doesn’t revolve around him being the number one guy (sorry Gold Coast, I’m not sure he’ll be any sort of answer up forward for you guys… and I’m not sure you’d want him?).

Until recently, Fogarty was mooted to be a possible departure from Adelaide in the off-season, and if he’s still thinking of leaving, could command quite a decent price. I’d be doing all I could to hold onto him if I was at Adelaide. He has looked like a match-winner right from the start of his career, to me, and though he didn’t lay a tackle (is this what concerns Pyke?) nor do a lot of power forwards. He still has the capacity to be physically imposing.

THE BIG FORWARDS
How good is it to have quality big men performing at the pointy end of the season? Jack Darling is basically in career-best form at the moment, topping 50 goals for the first time in forever, and clunking contested marks all over the place.

At Punt Road, Tom Lynch is playing like the player Richmond were hoping for and not the bloke in a Suns guernsey the past couple of years. It’s amazing how a player can turn it around when the right structures are in place, and he actually pours his heart into the contest, huh?

These two are more or less going head to head to this weekend as the Tigers take on the Eagles, and whomever is able to perform at the highest level will go a long way to carrying his team to win.

Who will Lynch draw as an opponent? Barrass? Schofield? And who takes Darling? The prospect of Grimes taking the job on is mouth-watering.

Seeing two of the league’s best forwards strutting their stuff at this time of year is magnificent. It’s been a long while since a power forward took over September – one of these two is primed to do it.

I’m loving what the Bulldogs are doing in the midfield in the second half of the season – that combination of Josh Dunkley, Marcus Bontempelli and Jack Macrae is probably the best in the game right now. They all work their ass off, all have great skills, and are as exciting as hell to see play our game.

Bont will be in the AA team for sure – I’d throw him on the half forward flank in a cheat move to get another mid in the team, and also because he has spent a fair bit of time in the forward half this season.

Sadly, the start of the season will probably cost Josh Dunkley a spot in the final 22, as he was playing forward for the first five games of the year. Since Round Seven, Dunkley has averaged 30.06 touches per game, and has been an outstanding tackler and clearance player as well.

Macrae will likely miss too, even though his season has been absolutely brilliant. 33.05 touches per game is a career high number, and he has been right at 37 touches over his last nine games – I’m not sure what else he can do to justify his selection, but it probably won’t be enough. The selectors will want Bont because he does things that change or win games, which is fair enough.

Shaun Higgins to Geelong. Jack Steven to Geelong. Eddie Betts to somewhere. Jack Lukosius running home… the rumour mill is in full swing at the moment.

You can tell we’re nearing the end of the season, can’t ya? And we haven’t even heard much about the players who are sitting on teams inside the eight yet.

Tim Kelly and Stephen Coniglio have their respective futures up in the air. Jon Patton is reportedly headed out of GWS. Brad Hill is supposedly heading east, as is Ed Langdon… Paddy Ryder’s name has been thrown around, as has that of Sam Jacobs and Hugh Greenwood… this is probably said every year, but this off-season is going to be huge.

I’ll be honest – I never want to see this get to the level of the US-Sports, with players bouncing around all over the place more often than they stay, but there is a genuine feeling that many clubs can make significant improvements this off-season, and given the way Brisbane has been shot out of a canon toward the top of the ladder, why can’t another team make a similar leap in 2020?

I reckon it’s locked in that Tim Kelly heads home, but if Geelong can translate that into a Brad Hill or Ed Langdon, whilst picking up Shaun Higgins, are they that worse off? I suppose it depends whether Gaz goes around again to an extent. He started this season looking phenomenal, but more recently he hasn’t had that spark. Chris Scott threw him into the guts against North for a while and he got plenty of the footy… maybe he’s just warming into September?

Who are the players your club has their eye on?

Aaaaanyway, it’s a tight squeeze in the midfield for All-Australian, with some big names that have had massive seasons set to miss out.

So, who are they, and who gets the spots?

The way I look at it, we’ve probably got six spots for mids. Centre, one of the wings, a cheeky half forward spot, ruck rover, rover and a spot on the bench (maybe two). When you look at who’s performed well, it’s pretty tough to narrow down.

I stated above I’m putting Bont on the half forward flank. It’s only a little bit of a cheat as he does swing forward often.

That leaves us with the following players to consider.

Not a bad bunch, huh?

So, before I narrow down to my top six, I issue a challenge to you… as you seem to like to have a bit of a crack here and there as recent events have illustrated – who would be your top six? And why? If you feel passionately about someone – argue their case. I’m all ears, and in this case, eyes.

Here’s my top six for All-Australian selection in no particular order.

MARCUS BONTEMPELLI – Have detailed him already above. Great year, career-highs and huge influence on the game.

NAT FYFE – The best pure ball winner in the league. Also at career-high numbers and is looking like a second Brownlow could become a reality.

TRAVIS BOAK – I’ve been so impressed with him all season. Has put that team on his back, and they sit in the top eight largely on the back of his efforts.

ELLIOT YEO – The best two way player in the game. I love the defensive aspects and the accountability. Seeing him take his individual match-up personally has been a joy. Not so much for his opponents.

PATRICK CRIPPS – I was falling off the Cripps bandwagon at the tail end of the Bolton era, but with him being shown the door, Cripps leapt back into contention with a couple of huge games.

LACHIE NEALE –  The best player on what could turn out to be the best team. If you’re looking for a reason for Brisbane’s resurgence, you’ll find many. But none bigger than the influence of Neale.

So, there you go – not as easy as you think it’d be. I have to say, this is definitely subject to change, as we have two weeks left in the season, and I have a very short memory (as you can see, I don’t have Tim Kelly or Ben Cunnington in the team. In fairness, Cunners has been off the boil for weeks up until having 30 last week).

Have a crack at yours on out socials and let me know where I screwed up – I’m sure you will. 🙂