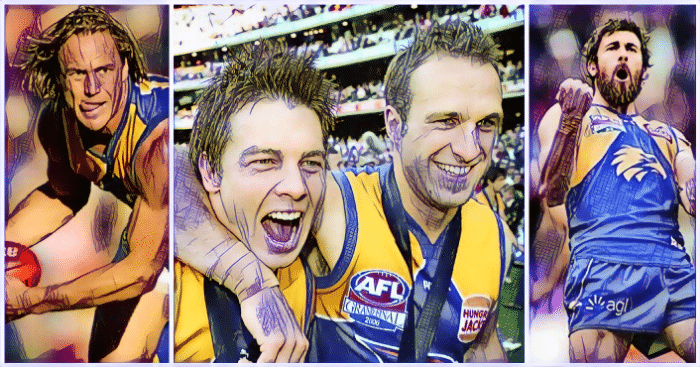 To truly appreciate the warmth, one must first experience the cold.

When the West Coast Eagles imploded off the field with an array of drug and behavioural issues engulfing the playing group, it was inevitable that their on-field performance would follow the same route. It was in 2010 that the club hit rock bottom on the field, claiming their first ever – and only – wooden spoon in their celebrated history. Between 2008 and 2010, West Coast missed the finals for three consecutive seasons, another new low for the proud club. The big drop came in 2008 when the Eagles fell from a top-four finish the previous year to second last on the ladder.

However, the club was able to rebuild its on-field fortunes after finally addressing and fixing its disastrous off-field culture. They went to the bottom of the ladder, lost their premiership coach to the soundtrack of Bronx cheers from the faithful and returned to the big stage in 2015. Yet, after they finally left the wilderness after nine tough years, the ghosts of the past reared their ugly head again.

Three days before Adam Simpson’s West Coast Eagles were set to play Hawthorn in the 2015 Grand Final, former premiership hero Daniel Chick dropped a bomb on his former club. Among the explosive allegations published on the front page of the Herald Sun was Chick’s claim that West Coast “ruined [his] life.” Chick subsequently revealed that he suffered from depression post-football.

“I went from the family club (Hawthorn) to the freakin’ playboy club and it ruined my life.”

Chick’s raft of allegations included that club staffers hid certain players from drug testers, a claim which was strongly denied by West Coast who said at the time that it was “deeply offended.” That accusation in particular was serious as it called the legitimacy of West Coast’s 2006 premiership into question. The penalty for avoiding a drug test was a two-year ban, as it was assumed that the player may have taken performance enhancing drugs, even if the test was only for recreational drugs. This is because illicit drugs may be laced with performance enhancing drugs as was the case with Collingwood duo Josh Thomas and Lachie Keeffe (now at GWS) who were banned for two years. The penalty has now been doubled to four years.

It was known that former West Coast captain Ben Cousins was able to avoid drug testers by being informed of their presence at training sessions by teammates who had already arrived at the club, as reported by the Herald Sun. After being alerted by teammates, Cousins would then reportedly not attend the training session. The Brownlow Medallist missed five training sessions between July 2006 and March 2007. Notwithstanding this, Cousins was never sanctioned by the AFL until after the 2007 season. Although, it was not for cheating the drug code, his crime was the all-encompassing “putting the game into disrepute” and his penalty was deregistration from the AFL for the 2008 season. His career was later resurrected by Richmond where he played out a final two seasons of his decorated and equally controversial career.

However, if Cousins was found to have avoided a drug test before the 2006 Grand Final and was adequately suspended, it is a fair assumption to make that West Coast’s 1-point premiership win over Sydney would not have eventuated. Cousins was after all, alongside Norm Smith Medallist Chris Judd, West Coast’s finest player. Yet, twelve months after the two players held the cup aloft – rightly or wrongly – both players had played their last game for the Eagles.

West Coast’s 2007 finals campaign ended in heartbreaking fashion with the club losing a semi-final on its home deck to Collingwood in extra time. Both Cousins and Judd missed through injury. However, Cousins’ hamstring injury did not spare him from coach John Worsfold’s wrath in his emotional post-game speech. Some of the team’s worst offenders, in regards to off-field behaviour, were singled out by Worsfold for “derailing the team’s efforts,” as stated in the Gillard report. Players that were named included Chad Fletcher, Daniel Kerr and Cousins. Worsfold told his players that “he would rather die than take a drug.” But his most vicious words were spared for Cousins.

The Sydney Morning Herald alleged that Worsfold said to Cousins; “you little c—, you have f—ed this football club.”

Two days later, Judd, still captain of the club, now well and truly in turmoil, announced he was leaving. Whereas, Cousins would soon be sacked.

Throughout that entire treacherous season, the AFL, despite threats, never came down hard on the Eagles, by way of sanctions. Nevertheless, they did order the club to clean up its act.

In April of 2007, then AFL Chairman Mike Fitzpatrick told the Eagles hierarchy than any further off-field indiscretions from its troublesome playing group would mean the club would be heavily punished via either the loss of premiership points, draft picks or both. West Coast were also told that Cousins would be sacked if he tests positive even once under his specialised testing regime. West Coast gave the AFL an undertaking that it would improve its culture.

It is an undertaking they took seriously, not only evidenced by their recent success, but by looking at their personnel and the way in which the club runs. Chick may have mentioned Hawthorn as the ‘Family club’ but West Coast took care to cultivate and embody that exact environment. The development of the club has gone beyond a recovery, as you can plainly see when shots of the dressing room appear on television after a game.

But what happens when a recovering club receives another blow? The Eagles never lost premiership points or draft picks in 2007. But they should have – and would have – if the AFL knew about another premiership Eagle’s run in with the law that was kept under wraps.

On November 2, 2007, then Adelaide Crows footballer Scott Thompson crashed into a light pole in South Australia, in an accident that injured one of the passengers, Adam Sampson, who was knocked unconscious. However, unbeknownst to the AFL, West Coast 2006 premiership player Steven Armstrong was also involved in the incident as he too was one of the passengers in the vehicle. When police attended the crash, a third passenger, Ryan Sampson allegedly told officers that he was the driver, when in fact it was Thompson. Gillard alleged that Armstrong also lied to police by backing up Sampson’s story.

The AFL only found out about the incident after receiving the Gillard report the following year prompting them to seek answers from West Coast, according to the Herald Sun. The report stated that; “what player Armstrong did was serious.”

“He wilfully provided false information to mislead police. Not only did it interfere with the investigation, but it may have had the effect that the true offender, namely Thompson, might escape punishment.”

Scott Thompson did later plead guilty to causing serious harm by dangerous driving and leaving the scene of an accident. He was given a four-month suspended jail sentence.

Gillard concluded in his report, published by the Herald Sun, that the Armstrong incident was a direct breach of their undertaking to the AFL. However, while Armstrong did inform the club of his involvement in the incident, West Coast did not alert the AFL. If they did, the AFL could well have initiated its threat to strip the club of premiership points and/or draft picks, as clearly Armstrong lying to police falls under the umbrella of a “serious indiscretion” by a player.

Had this eventuated, it could have changed the course of another West Coast premiership, as the Eagles recruited Chris Masten with their first selection in the 2007 Draft, who would go on to help the club win its 2018 flag. There was only a kick in that game, too.

At the height of the drugs scandal, a West Coast Eagles official told The Weekend Australian that all clubs have problem with drugs. But there are problems and there are disasters.

While what happened at West Coast was unquestionably a disaster, Armstrong’s behaviour was an additional problem. Did West Coast do the right thing? How can we balance the recovery of a club against the foolish behaviour of a single individual? Did club leadership look at their trajectory and opt to launch forward and out of the mud at all costs?

What was salvaged from the wreckage laid the foundation for a bigger, better version of the West Coast Eagles.

There’s no whitewashing this history. It’s difficult, deep and full of very uncomfortable truths. However, without facing up to, and owning the errors of the past, there is no way to move forward.

The turnaround can’t be properly appreciated.

There are many who would prefer to forget about the dark days of the West Coast Eagles, instead opting to celebrate the on field greatness of Ben Cousins, and the success reaped by the team in 2006, defeating the Sydney Swans in a classic Grand Final to avenge their loss twelve months earlier.

Some would prefer to remember the time as one of silver linings without the dark cloud attached.

Some would prefer to never again acknowledge the cultural issues that plagued the club.

But West Coast, and many of their supporters chose to accept it and learn from it – that’s what makes this club all the more impressive – startlingly so. I doubt there is any other organization in Australia that has so wholeheartedly turfed out a poisonous culture so steadfastly and effectively. The Eagles know their history. Unlike other clubs they have learned from it and applied those learnings to build what is now a powerful and sustainable football club. I used the word “poisonous”. Poison runs deep and leaves scars. Scars that undeniably ‘taint’ the 2006 win. But in hindsight, we can see that West Coast was in the process of hauling itself out of the muck, with very little help from the AFL. The effort it takes for a hulking and injured club to stand up, wipe itself off and heal is enormous.

With one premiership in the bag, and eyes on another this season, the West Coast Eagles, whilst at one point a beacon for what not to do, have become the poster boys for rebuilding and inspiring pride.

There’s no excuse for other clubs suffering from a poor culture to not turn their ship around when you look at where the Eagles were, and where the Eagles are now. Values matter, hard work matters and dogged perseverance matters.  Multiple times the Eagles took hits, one struggling player here, another one there. The number of other clubs that are straying close to the quagmire is alarming. It takes a strong sense of self both as individuals and as a club to stop the fall.

That said, West Coast’s history shouldn’t make the club embarrassed to tackle difficult issues as they arise. There will be more players and personnel who struggle – as there are in every community. West Coast is now in a position to handle potentially explosive issues with grace, tact and experience. They can now actually provide support and help to those who need it most. Those who ignore history are doomed to repeat it.

More like a phoenix than an eagle, West Coast’s rise from the ashes is a remarkable example of how to emerge from a bad situation and rebuild something good.

And perhaps something great.