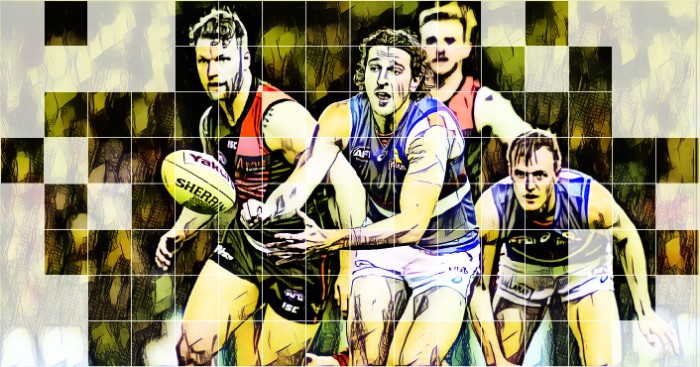 It was billed as a mini elimination final, both for Essendon to consolidate their spot in top 8, and for the Dogs to keep their September dreams alive. After Dylan Shiel nailed Essendon’s opening goal 21 seconds into the contest, no one – not even the most loyal Dogs fan could’ve predicted what came next, with the Bulldogs kicking the next 21 goals to absolutely steamroll a Bombers team ravaged by injury but with no excuses for such a pitiful performance. Here are the Big Questions stemming from the Western Bulldogs 104-point destruction of a very disappointing and suddenly vulnerable Essendon.

How? How were the Bulldogs allowed to kick 21 unanswered goals? It was astonishing viewing on Saturday night as a team entrenched in the top eight but needing another victory to fully solidify themselves, became a set of traffic cones against the fastest finishing outfit of 2019. The statistics are damming for the Bombers, who were minus 124 disposals, negative 36 in contested possessions, down 26 in marks, registered 29 less inside 50’s and only levelled the tackle count.

Let’s put aside Essendon’s woeful performance, because in reality this was a simply outstanding victory from the Dogs, who put in a complete 22-man team performance of the highest order. With the margin a healthy 54 points at the main break, many supporters would’ve expected Footscray to take their foot off the pedal, but with every Bomber forward thrust, their defence stood up consistently, and even took it as a personal insult when Essendon kicked three goals in junk time of the last quarter. While the Bombers wilted under the faintest of pressure and precision, the Dogs pounced at every opportunity, and there was not a single member of the Bulldogs team that had a bad day.

Performances like this will have the Bulldogs believing in fairy-tales once again, as their heroics of 2016 will return to supporter’s minds. Many team watching the carnage will now be wary should the Dogs make the finals, as their beautiful game style has the capacity to cut apart any team’s defence and most importantly, the Dogs seem to be able to sustain this frenzied attack for long periods. Their youth gives them so much energy and this could be dangerous for the older, slower sides in September.

The Bulldogs defence is held together by captain Easton Wood and underrated Zaine Cordy and Jackson Trengove, up forward they have one of the best young key forwards in the competition and a host of smalls that can terrorise any opposition, their ultra-talented ruckman Tim English is still a little raw but has improved significantly throughout the year, and their midfield core is simply marvellous, with Macrae, Bontempelli, Dunkley and Hunter all in that sweet spot of being under 25 years of age but all being over 100 games played (expect Dunkley, who has managed 63 games).

ARE THE BOMBERS IN TROUBLE?

In the simplest terms, the Bombers are in deep trouble. Yes, they are still a game clear inside the top eight, but their last three performances have given everyone at Windy Hill cause for concern. Falling across the line against the worst team in the competition, a horrible showing against an inconsistent Power, and then this embarrassment against the Dogs, who let’s remember aren’t yet back in the top eight, and suddenly Essendon are vulnerable to up to four teams still in the hunt for September action.

Yes, they have been ravaged by injury, and they made six changes to the team this week, but don’t forget that into Saturday night’s team came skipper Dyson Heppell and experienced bodies Shaun McKernan, Mark Baguley and David Myers. Would this result be different if the Bombers had their best 22 take the field? Perhaps, but no AFL club that respects itself and its fans would put forward such a disgusting display as Essendon did, and the question needs to be asked if the Bombers even deserve to play finals after their last three weeks.

When a team has 124 more possessions, it is generally accepted that the other team will register more tackles, as they don’t have possession. So when the tackle count is dead level, it speaks volumes for Essendon’s complete lack of pressure on the ball carrier. To allow the Bulldogs to have so much of the ball is one thing, but it is completely unacceptable for John Worsfold’s men to allow the Dogs as much space as they were given. Time and time again, the Bulldogs were able to cut through Essendon’s weak team defence and it seemed to get worse as the night wore on. While the Bombers pressure improved slightly in the last quarter, it means almost nothing as they were 20 goals down at that point.

The Bombers face one of the toughest endings to the season, having to travel to Perth to play the Dockers, before returning to Melbourne for a final round showdown with Collingwood, who are still in the mix for a coveted double chance. All of Tom Bellchambers, Michael Hurley and Adam Saad are no certainties to return for the minor round, and if the Dons fall out of the top eight, it could spell the end of the line for coach Worsfold, who looked like he had no answer to the growing margin.

WHO WERE THE PLAYERS OF THE MATCH?

How can we separate a select few players from a Bulldogs team that had a seemingly endless supply of standout performers? Limiting ourselves to the best four players was extremely tough, and any player not mentioned in this section can still hold their heads high that they contributed to the biggest victory of the AFL season to date.

It’s just amazing that the Dogs managed to collect so much of the ball, and Jack Macrae was one of main victims of leather poisoning. 38 touches, 14 of which were contested, Macrae was a beast all across the ground, and his eight tackles and eight inside 50’s were both team highs. Gaining 616 metres for the Bulldogs, Macrae, who had 27 uncontested possessions, managed five clearances in a remarkable midfield effort.

16 disposals at quarter time. 25 at the half. What more can be said about a player in the form of his life? Finishing with a career high 39 touches, Dunkley’s 22 contested possessions and six clearances were one of the main reasons the Bulldogs won by as much as they did. Surging into All Australian contention, Dunkley’s second half of the season has been particularly excellent, and if the Dogs make it to September, it will be on the back of Dunkley’s brilliance.

Without Essendon’s main ruckman Bellchambers to contend with, young English had a night to remember, as he dominated Zac Clarke and Shaun McKernan from start finish. While he didn’t register as many hit-outs as Clarke, his presence allowed the Dogs to take control of the midfield. Collecting 17 disposals, five inside 50’s, four marks and four tackles to go with 20 hit-outs, English is still raw and a long term project, but at 22 years of age, English is firmly entrenched as Footscray’s No.1 ruckman, and he will only improve as his career reaches its peak.

The token Bomber in a team full of disappointments, Merrett was the lone hand against an onslaught, with his 33 disposals and eight marks the only highlight of the game from an Essendon perspective. Merrett statistics speak for themselves, as he recorded team high numbers in disposals, marks, clearances, inside 50’s, rebounds from defensive 50, was second only to tagger Dylan Clarke for tackles, and his efficiency of 78% was highest for Essendon players over 15 possessions. It says a lot when the same player has the most inside 50’s and rebounds from defence, and it stands to reason that had Merrett not been on the park, the end result could’ve been far worse.

Amazingly, Lachie Hunter’s 34 disposals were only third for Footscray possessions. Registering a team high 672 metres gained, Hunter also took a team high nine marks playing as the link between forward and defence. Leaving the clearance work to Macrae, Dunkley and Marcus Bontempelli, Hunter ran all night, providing bail out kicks aplenty as the Dogs moved the ball from defence. 23 of Hunter’s possessions were uncontested, and his solitary defensive rebound and three inside 50’s were indicative of a player who did his best work in between the two arcs.

WHO NEEDS TO IMPROVE?

To be completely fair to the three players mentioned, Essendon were so terrible that I could’ve listed at least 10 players from Saturday’s game that need to lift. However, there are a few players are should rightfully be feeling especially accountable for the Dons horrendous display, and the post-match review for these three will make for ugly viewing.

With Essendon down by 54 points at half time, Brian Taylor’s favourite player Orazio had registered just one possession. Josh Dunkley had collected 25 to the same point. Fantasia improved in the second half but the game was well and truly over and any improvement made to his game wasn’t going to make much difference to the contest. At the end of the game, Fantasia had collected eight disposals, but like many of his teammates, Fantasia had absolutely no impact on the game and went unsighted for longs periods.

Two weeks ago against the Suns, Jake Stringer was one of Essendon’s most influential players. This week, in a game that was super important to the Bombers, “The Package” was the complete opposite. Collecting just seven disposals, only three of them being effective, Stringer could not get near it, even with stints in the midfield. A player that has always struggled for consistency, Stringer is seen as his team’s barometer, when he plays well, Essendon’s players follow his lead, but when he puts in a stinker like he did on Saturday night, the Dons tend to fall to pieces.

It has been an interesting year for veteran Zaharakis, who has had his most inconsistent season to date. His best is still brilliant, but it hasn’t come as often as in previous years. While more than half of Zaharakis’s teammates collected fewer disposals than the 13 Zaharakis managed, it was the lack of impact with those possessions that was the most disappointing. Playing in the middle, Zaharakis and his midfield cohorts were completely outshone by the Bulldogs, and there seemed to be nothing Zaharakis could do to stop the avalanche.