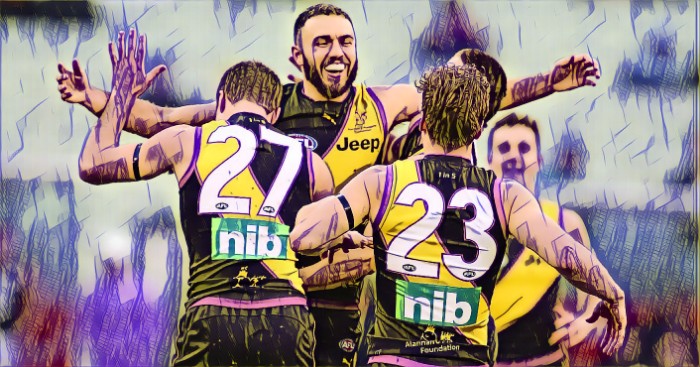 Under a typically gloomy Melbourne winter’s sky, the Tigers took on a Carlton determined to finish the year strongly. The rain fell heavily in the opening term, and it was Richmond who adapted to the conditions better, swarming forward in their customary fashion.

Neither side managed to score a goal for the first 12 minutes of the game, but by quarter time, the Tigers had settled and their better composure resulted in three goals to Riewoldt, Lynch and Graham. The Blues were far less efficient, and despite having almost as many entries inside 50 as the Tigers, they could only manage two behinds for the quarter.

The second quarter started the same as the first with no goals until the nine minute mark. Richmond’s discipline and superior structure made the Blues head forward with no fluency. Nick Vlastuin seemingly had a crystal ball as he was always in the right position to take an intercept mark or make a spoil. He has had a knack of doing that, and the role of interceptor has become one of the most important in the game. With Rance sidelined (number one intercept player in the game last season), Vlastuin’s emergence as the zone off defender, capable of reading the incoming ball better than anyone else has done as much as the dour defence of Dylan Grimes to plug the defensive hole.

Eventually the deadlock was broken when Jack Graham kicked the first of his three goals for the term, opening up a 35 point lead to the yellow and black. At one stage the Blues had five consecutive inside 50’s for another poor return of just two behinds. Were it not for an errant kick in late in the term which resulted in a goal to Matthew Kreuzer, the Blues would’ve been goalless to half time for the first time ever when playing Richmond. At half time it was Richmond 6.4 (40) v Carlton 1.6 (12).

Ten scoring shots to seven does not seem insurmountable, but when you’re missing chances at a ratio of six out of every seven chances, it must have a detrimental effect on the team.

Four minutes into the third term, Shane Edwards celebrated his 250th game with a running goal from 50m. As an aside, he is the 250th player to play 250 games.

The Tigers led by 35 points again early in the term until Marc Murphy scored from a tight angle to get the Blues second goal. Interestingly, this goal was reviewed and the umpire’s call was actually a behind as he believed it had made contact with the right goal post. The video did show clearly the ball had not done so, but I, for one, can’t recall an instance where an umpire has called a behind to have it reversed and a goal was the result. At the 22 minute mark, Mitch McGovern was able to kick his first goal after his well publicised lay-off, and the Blues found themselves down by a respectable four goal margin. This was also the margin at three quarter time after goals to Lynch and Casboult before the end of the quarter. However, there was a distinct feeling that he game had changed. Carlton had gained the ascendancy in contested possessions, inspired by the bullocking work of Cripps, but Prestia, playing his 150th game, was doing more damage out of the middle.

Prestia would have to be close to leading Richmond’s Best and Fairest award this season. His 35 touches made it a great month for the midfielder, averaging 32.75 over his last four games, and a career-high 27.25 for the season.

Early in the last quarter, a Riewoldt goal opened up the margin to five goals and all hopes of a Carlton comeback seemed lost. The Blues fought hard and had plenty of forward entries, but weren’t able to convert until a 100m penalty to Gibbons resulted in a goal at the 13-minute mark. When Mitch McGovern converted a set shot with seven minutes still remaining, Carlton were inexplicably just 16 points behind the premiership fancy. The Blues fought on grimly but never really looked like adding to their score in the last five minutes. The Tigers are too professional, and they eventually wore the Blues down with two late goals to Caddy and Castagna to eventually run out by 28 points which is probably a more accurate reflection of the game.

David Teague will no doubt be lamenting the six goal start his boys gave to Richmond – they’re just too good to give that kind of start to. Interestingly, the same occurred when these two teams last met in Round One, and in both cases it proved to be around the final margin.

Jack Graham finished the game with 14 tackles to accompany his game-high four goals, and was strongly considered for best on ground, but I went with Dion Prestia. His 35 touches and 11 clearances were the engine room for the Tigers, and his overall game was a true four-quarter performance.

For Carlton, it was good signs… yes, but while the Blues continue to show improvement, true four quarter performances for the Navy Blue seem very few and far between. For the Tigers, they bank another win, and have to knuckle down for a big confrontation with the Eagles next week at the G.

So if we were to name three positives for each team coming out of this one, where would we head?

The Tigers now sit well and truly entrenched in the top four. this looked to be a bit of a pipe dream when half their team was on the sidelines with significant injuries in the first half of the season. it is testament to their depth and ability to unearth talent that they are so well placed at the business end of the season.

They’ll get Dustin Martin and Trent Cotchin back into this side in the coming weeks and, should things go their way with the rest of the list, will have a full side to choose from minus Alex Rance. Things are clicking at the right time of the year for them, and there are many speculating they’ll have a clean run straight through to the last day in September now.

The form of Jack Riewoldt is not an immediate concern. he had just six touches as he continues to struggle finding his touch after such an interrupted season, but with Tom Lynch and others picking up the goal kicking slack (thanks Jack Graham), the Tigers can afford to be patient. it’s a nice place to be.

The fightback, the composure, and the refusal to lay down and accept a defeat. The Blues may have lost this by 28 points, but into the last quarter, they were in this game up to their eyeballs, and though it was a little hard to comprehend how – Richmond were the better team – the fact that Carlton scrapped and clawed their way back into it was gratifying.

The key backs really stood up in this one. Jacob Wietering and Liam Jones both won their contests against Tom Lynch and Jack Riewoldt. Both recorded double figures in spoils and restricted their direct opponents’ run at the footy to allow Lachie Plowman and Daisy Thomas to drift in and play intercept roles.

Mitch McGovern looked like he cared. early in the season, be it due to fitness or attitude, there were days when Mitch just didn’t seem invested. though his stats are not going to blow anyone away in this game, there was a passion and genuine emotion in the way McGovern attacked the contest. Hopefully it is a sign of things to come.

Overall, this was a good win to the tigers in trying conditions, but there were some real positives to take away for Carlton as they build toward a 2020 campaign.