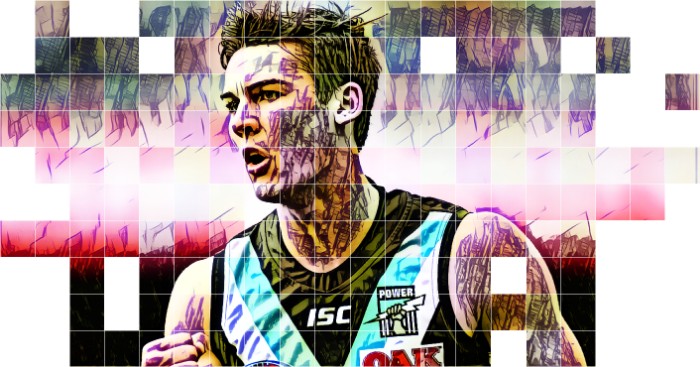 Port Adelaide, the Jekyll and Hyde team of season 2019 are currently occupying 8th position following a big win over the Swans at the Adelaide Oval. A goal from Cam Sutcliffe after the final siren boosting their percentage just enough to leapfrog their local rivals Adelaide ahead of the Crows’ game against West Coast on Sunday afternoon.

In somewhat tricky conditions the Power led at every change to win by 47 points and post consecutive wins for only the third time this season. An aerial superiority in the ruck saw Port have a decisive hitout advantage (49 to 24) and the pressure from their forwards forced the Swans into uncharacteristic errors which resulted in multiple goals to the home side.

The most pleasing aspect from a Port Adelaide perspective was that more than one of their midfield stars had relatively quiet games, former Captain (and Brownlow smokey) Travis Boak well held by George Hewett and Robbie Gray fading out of the contest after a productive start. Instead it was the likes of Connor Rozee, Darcy Byrne Jones and ruckman Peter Ladhams (in just his fourth game) who were consistently damaging from start to finish in an impressive performance for the team in teal, black and white.

The game didn’t start particularly well for the Power with two poor kicks from Hamish Hartlett leading to consecutive shots on goal for Isaac Heeney. Despite converting the more difficult of the two chances, the dynamic Swan missed the second and could only watch as the Power transitioned the ball inside 50 from the resulting kick in where Rozee set up Karl Amon for the home side’s opener. Further goals to Ollie Wines and Todd Marshall after an unfortunate slip from Jordan Dawson saw Port out to a thirteen point lead before Aliir Aliir (given the task of manning Charlie Dixon) won two big contests on centre wing that ended in goals to Ben Ronke and Tom Papley. Scores were level at the 26 minute mark after Zac Jones missed a gettable set shot but the unflappable Rozee saw the Power claim a seven point lead at the first change after an errant Jake Lloyd turnover.

The heavens opened just minutes into the second quarter, Dan Houston profiting from a poor kick in by Callum Mills to slot a simple goal from 30 metres. However, as the conditions deteriorated the Swans’ pressure intensified and their shorter, speedier team got the game played on their terms. Young midfielder Ollie Florent was combining well with speedster Zac Jones, George Hewett was keeping Boak quiet (and finding the footy himself) and rebounding defenders Jake Lloyd and Jordan Dawson were using the footy with great composure as Port struggled to exit their defensive 50. Alas, a paltry return of six behinds (Kennedy, Rowbottom, Florent and debutante James Bell the culprits) whilst heavy rain was falling saw the Swans miss their chance to apply scoreboard pressure and as the skies cleared Port Adelaide pounced. Two goals within a minute to Dixon and Rozee had Port up by twenty one points in the dying stages of the half and although Menzel kicked a classy goal deep in the pocket to trim the halftime margin to fifteen that was as close as the visitors would get.

A blistering start to the second half with goals to Marshall (his second), Rozee (his third) and Sutcliffe had the contest more or less wrapped up, the Power winning the first six clearances as Ladhams and Paddy Ryder asserted themselves on the contest. Hayden McLean, Sam Reid and Aliir Aliir were all thrown into the centre square to compete but the one time Aliir got the jump on Ryder and looked set to break away proved fruitless as the Power veteran proceeded to chase him down and win a free kick.

Port’s superiority continued with a three goal to none final quarter and as Sutcliffe’s shot sailed through, the heavens opened once again, only this time accompanied by the sun as a rainbow made a somewhat fitting appearance.

This kid is having an incredible first year playing in the most difficult position on the ground. Handled the wet footy like it was dry, set up two goals with poise and vision whilst kicking three himself, all when the contest was at its hottest.

One of the best games I’ve seen him play, DBJ was the premier rebounding player on the ground and a constant thorn in the Swans’ side. Composure and foot skills aren’t the first words that spring to mind when I think of Byrne-Jones but his ability to hit teammates at top pace time and again after winning critical one on ones was exciting to watch.

A typical performance from the versatile defender. Whether it was tackling Papley to deny Sydney a certain goal, a last ditch spoil on Menzel after making up thirty metres of ground or spearing a forty metre lace out pass to a leading Dixon, Clurey did it all.

The inclusion of Ladhams as the Power’s primary ruck has given them a very different look. His agility, desperation and deft ball skills helps mitigate the impact that mobile ruckman have had against the Ryder/Lycett combination this year. Ladhams was happy to get his hands dirty at stoppages but also positioned himself in intelligent positions a kick and a half behind the play. It helped that Sydney weren’t playing with a recognised ruckman but hey, you can only compete against what the opposition present to you. On this performance Lycett may find it hard to squeeze back in.

I see this guy as the best young midfielder at Sydney and he was everywhere today. I had him as the best ball winner on the ground in conditions that really shouldn’t have suited his slight physique. Florent won plenty of inside ball but was just as damaging on the spread with his pace and class. Inaccuracy in front of goal was his only blemish but he wasn’t alone in that regard. Outshone some more fancied teammates like Parker and Kennedy as well as the opposition’s.

Went to Travis Boak at the opening bounce and was so effective at winning the footy that the Port clearance king ended up pushing forward to limit the damage.

Kept Boak to just 13 possessions whilst having 17 himself.

I really enjoyed this battle as the athletic Swan came up against the powerful Port forward. After just shading Dixon in the first term Aliir had a brilliant start to the second, winning plenty of ball and providing drive from defence. However, a big mark (and goal) to Dixon just before halftime gave him some confidence and after Aliir was caught holding the ball at the start of the third quarter he didn’t have the same assured presence down back. A dropped mark (and goal to Dixon) shortly after saw the tables turn as Port Adelaide kicked away.

Aliir was far from disgraced though as he provided the most competition for Ryder and Ladhams when thrown into centre square stoppages.

Was barely sighted, having just twelve disposals in what was a dirty afternoon