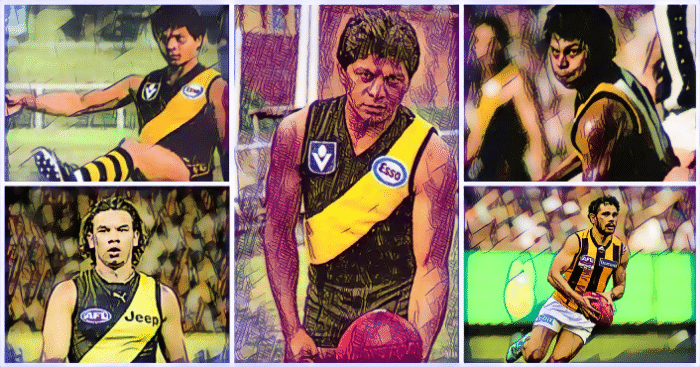 Some stories and histories just aren’t as recognizable as the names that possess them. Some names are larger than life with their tales having been passed down over the years, but quite often there’s more to their stories than what that old bloke chewing your ear at the bar has shared with you. Often there’s a ripper yarn to accompany that name that you’ve never really heard of, or an unknown chapter in the life of the legend you hear so much about. Any Given Mongrel delves into those yarns, characters, legends and their stories.

When the discussions around Australian football family dynasties arise, the same names are consistently tabled; Ablett, Silvagni, Daniher, Shaw, Krakouer, Hird, Cloke. Those who follow football at a State level will almost certainly have piles of family names that have contributed to clubs and leagues through generations with vast lineages. The nostalgia and sentimentality of family members serving the clubs of their fathers and grandfathers is fuelling the AFL’s father/son drafting policy, and now also shining through with representation in AFLW.

However, there is one family whose name is synonymous with various leagues and teams throughout Australia. It is that of absolute football royalty; Rioli. With a champion pedigree extending to the Long and Ponter families, crowds have been captivated by Riolis and their families for generations. Young footy fanatics of the present have been wowed by Cyril Rioli and his feats at Hawthorn – four premierships, three All-Australian selections, a Norm Smith Medal and Goal of the Year. Thanks to him 33 is still a favourite jumper number worn amongst the Hawks faithful – even after his retirement.
West Coast and Richmond supporters alike are currently being tantalized week in, week out by the class and showmanship of Willie and Daniel Rioli. Both of whom are now premiership players for their respective clubs.

Followers of the South Fremantle Bulldogs have been witness to copious talents over the years, from their Under 19s to the seniors – Sebastian (Sibby), John, Cyril Jnr, Willie Snr, and Dean Rioli (who went on to play 100 games for Essendon) have all laced up the boots for the Souths.

‘Those that saw him play say that he was the best of the lot’.

The aphorism is no more occurrent than in conversations regarding Maurice Rioli. No other player has the term “magic” bestowed upon their name at every mention quite like Maurice does. Forever known to his former teammates as Mr. Magic, his path to AFL greatness was paved with skill, determination, controversy and an abundance of the mercurial.

Born in the windy September of 1957 off the coast of the Northern Territory, Maurice Joseph Rioli was the second son born of Helena and Cyril Rioli Snr on Melville Island. He was raised a hard-working boy in a family that knew no other way. Cricket and football were common pastimes in the Rioli family – his mother Helena credits their active lifestyle in a tightly disciplined household for the determination shown by her son throughout his life. Maurice started boxing in his teens and won several State lightweight and welterweight titles in WA and the Northern Territory, almost making it to Golden Glove level.

His pathway to senior football began at St. Mary’s in the Darwin competition, where in the season of 1974-75 (NT football was played across the summer months), he was spotted by a scout for South Fremantle and noted as a fast-paced, hard tackling 16-year-old with an enigmatic, peerless game sense. Influenced by the chance to join his older brother, Rioli signed with South Fremantle. Head coach at the time and former Richmond player, Mal Brown would go on to call Maurice Rioli one of the greatest, naturally talented on-ballers that he had ever seen.

From 1979-1981 they managed to play three consecutive Grand Finals, winning the flag in 1980 and seeing Maurice continually star, earning himself the Simpson Medal for Best on Ground in the 1980 & 1981 Grand Finals. Early signs clearly demonstrating Maurice to be the ‘Master of the Big Stage’ that he would soon become recognized as. It is said that by the end of the 1981 season, VFL clubs were lining up to sign the brilliantly skilled star, however his closeness with current coach Mal Brown paid dividends for Richmond. It was Brown who reportedly stepped in and told Rioli “Look, you’re going to Richmond – sign this bloody paper!” and just like that, come 1982, Rioli was on his way to Punt Road after notching up 121 games in the WAFL.

Upon arrival in 1982, Maurice Rioli was presented with Jack Dyer’s legendary jumper number 17. Some early minor controversies arose amongst players as after only a few games, Maurice was first chosen to play Centre, pushing Geoff Raines out of the position that he had dominated for the past five years. At the time Raines was considered the best Centre in the competition, winning three Best & Fairest awards in the position, but he was promptly shifted in lieu of Rioli.

It took next to no time for the Richmond faithful to warm to the change. Rioli’s lightning quick handballs, precision field kicking skills and a football mind that always managed to be numerous steps ahead of his opponents; and teammates for that matter, quickly set him apart from the rest, showing why so many clubs valued him as such hot property. The move was considered a masterstroke as the Tigers finished atop of the VFL ladder, landing a spot in the Grand Final after easily accounting for fierce rival Carlton in the Semi-Final. The cherry-on-top of a superb debut season came in yet another dominant Grand Final display from Maurice. Carlton beating Hawthorn in the Preliminary Final set up another Carlton/Richmond blockbuster. Sadly, a premiership in his first season at the Tigers was not to be, with his Tigers going down to the Blues by 18 points. A heroic three goal haul and roving masterclass however, saw Rioli manage something that no other before him could – not only being the first to be awarded the Norm Smith Medal in a losing side, but also becoming the first Indigenous player to win the award. To cap it off, he also won his first of two Best & Fairest awards for the season at Richmond.

More controversy reared its ugly head at the conclusion of the season as Geoff Raines walked out on the club for refusing to match his contract with that of Rioli’s, causing a rift between teammates and leading to numerous high-profile players leaving the club. This was also an early flag of a long personal struggle for Rioli with gambling. As reported in The Australian, few, if any, knew when it was that Rioli started to punt every cent that came his way. His wife, Robyn, had the closest idea – she turned to unlawful welfare payments to pay the food bills while her husband squandered the family income. A magistrate was sympathetic to her situation and no conviction was ever recorded.

Weightman also added Rioli was “ahead of his time” as a tackler, revealing he would advise teammates: “Hey brother, you gotta draw from the hips like a gunfighter.”

While 1983 and 1984 were years of rapid decline for the Tigers, Maurice remained a shining light on the field, winning his second Best & Fairest award for the club and finishing second in the Brownlow Medal Votes to accompany an All Australian and Western Australian State selection, as well as representing Australia against Ireland in Gaelic football. By 1985 Richmond were well and truly struggling. With Rioli finishing second in the Best & Fairest, his time at Punt Road was coming to an end. Further financial strain was placed on his family with his gambling out of control, souring relationships with teammates and coaches.

By the summer of 1985–86, the Sydney Swans had been flat out poaching talent on ridiculous contracts lead by new team owner, wealthy tycoon Dr. Geoffrey Edelstein. Maurice Rioli was publicly announced as a marquee signing, but despite moving his family to Sydney to live out of a motel, he never showed up for training. It was further reported that due to previous disagreements with personnel at Richmond, Rioli would either join Essendon after years of pursuit by then coach Kevin Sheedy, or return to South Fremantle.

After a civil action in the Perth Supreme Court from South Fremantle, who were adamant Rioli was tied to them on a three-year deal, Sydney were fined $20,000 and despite reports, Rioli returned to Punt Road midway through the 1986 season. His form was up and down for the remainder of that season and into the next, with Richmond finishing bottom of the ladder. Rioli captained Western Australia in the State of Origin game that year against his teammate and friend Dale Weightman, who was captain of Victorian squad. At the conclusion of the 1987 season, Maurice left the VFL after achieving so much from 118 games at the Tigers. He returned to the WAFL to find a vastly changed landscape with the West Coast Eagles being formed in his absence.

A return to South Fremantle saw him captaining the 1988 and 1989 teams. With the differing timing of seasons, Rioli managed to captain-coach the Waratahs club in Darwin in the lower league. Finishing up his playing career in the WAFL in 1990 on 168 games for 133 goals, he continued to play in Darwin for the 1991 season, backing it up with two seasons as head coach for the Warratahs. It was during this time that Maurice Rioli found his way into Politics, being elected as the member for Arafura in the Northern Territory Legislative Assembly for the Labor Party.

In 1993 Maurice Rioli was invited to the MCG to present the Norm Smith Medal on Grand Final day (Which ironically was won by his future Brother-in-law and fellow Tiwi Islander Michael Long). It was only three weeks later that he hit his lowest point and had to awaken himself to just how low he had sunk. Maurice had not only been pawning his own possessions to fund his historic gambling habit, but it was revealed that he had pawned the parliament supplied fridge, television and microwave from his own office. After initially claiming this was to fund his trip to the MCG to present the Norm Smith Medal, he later admitted that it was done to fund his gambling habit.

“I’m glad it’s in the open because I’ve not only lied to myself but to my friends and a lot of other people and that’s what gambling does to you,” Rioli said. “I apologise. I’m sorry for what I’ve done because it was wrong, because I have a problem. I’ve got to be honest. I’m addicted to gambling… I’ve done silly things to my friends, my family.”

Maurice battled on and beat the humiliation, remaining in parliament until 2001 where he finished his political career with distinction. He spent the final ten years of his life mentoring young Aboriginal footballers and working as a Community Services Manager for the Tiwi Islands Council until he tragically suffered a fatal heart attack at a family barbeque on Christmas day in 2010, aged only 53.

Not many people can boast to have done more for Indigenous Football in Australia than Maurice Rioli. He will be remembered as a trailblazer for Aboriginal people, and a skilled footballer before his time, managing to do things on the field that are still rarely comparable in today’s standards. His entire sporting career was a statement to young Indigenous footballers around the country, inspiring many of the current generation of stars.

He will be remembered as one of the greatest players to lace up the boots for Richmond. He was always a great player, but when the heat was on, Rioli was at his best.

He was nothing less than Mr. Magic.