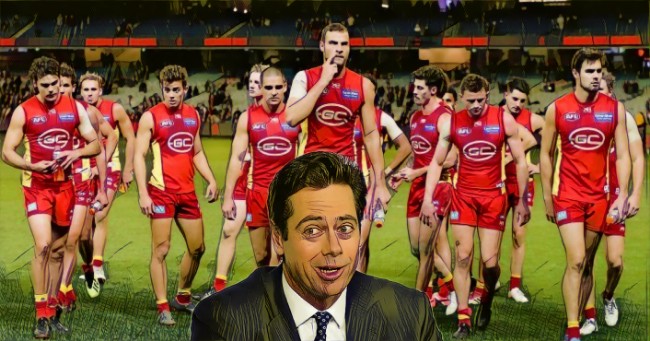 The AFL Let Their Suns Down

The Gold Coast Suns’ losing streak has stretched out into its fifteenth, depressing game with the AFL becoming more and more concerned with the state of its struggling seventeenth club. Despite being equal top of the ladder after a 3-1 first month of the season, Gold Coast are destined to claim their second wooden spoon in three weeks’ time, in a season that could not end quickly enough.

The Suns will receive ample emergency assistance from the league at season’s end, while the finer details of their “rescue package” are still to be thrashed out, it will include a priority pick. This pick, upon request from the club, is set to feature at the beginning of the draft, notwithstanding the chagrin of the other seventeen teams in the competition. This effectively gifts Gold Coast the opening two picks in November’s National Draft, barring a late season renaissance that lifts the Suns from the bottom of the table.

Several recruiters view Victorian duo, and best mates, Noah Anderson and Matt Rowell as the clear standouts from this year’s draft pool. The pair are almost certain to be taken with the opening two draft selections, regardless of whether the Gold Coast end up with Pick 1 and 2 as expected. The Herald Sun has reported that Anderson and Rowell are “open” to being drafted to the Suns together. Not that they exactly have much say in the matter such is the nature of the AFL’s national draft. Although, draftees in recent times have privately conceded that Gold Coast would be their least desirable destination.

Gold Coast are also reportedly planning to recruit Anderson and Rowell as a package in order to assist with retention which has been a troubling problem for the young club. The drafting of best friends as a collective is not without precedent at the Suns, who drafted South Australian duo and Henley High school mates Jack Lukosius and Izak Rankine at Picks 2 and 3 respectively last year. Rankine has already a signed a long-term deal to remain on the Gold Coast in a major boost to the club. However, Lukosius is understood to be already eyeing the exit door with Adelaide, Port Adelaide and St Kilda amongst the clubs interested.

Former captains Gary Ablett, Tom Lynch and Steven May headline the list of names that have walked out of the club since its AFL inception in 2011. The club will be well and truly up against it to avoid emerging young forward Ben King also being added to that list. The Saints, who drafted his twin brother Max, are said to be keen.

Coach Stuart Dew has publicly said that “the priority pick is not the answer” while denying that the club has requested one in a post-game press conference last month. This was despite, chairman Tony Cochrane having already gone publicly with the club’s desire to request a priority pick.

“I will become a 6,000-pound gorilla on this,” Gold Coast chairman Tony Cochrane told AFL Media regarding the club’s need for a priority pick.

The Age’s Jake Niall has also reported that Gold Coast too may be awarded with special access to the Northern Territory as an academy zone.

But how could McLachlan’s AFL – with a straight face – give Gold Coast all this special assistance on one hand then on the other reject suggestions that the AFL made mistakes in establishing the club to begin with?

AFL CEO Gillon McLachlan, who was pivotal in Gold Coast’s establishment as AFL deputy at the time, told SEN last month that he did not “acknowledge” that strategic errors where made in Gold Coast’s inception.

Clearly, the AFL, despite McLachlan’s deluded denials, did make monumental mistakes in setting up the Suns. First on that list would have to be the appalling Carrara stadium deal provided to Gold Coast that nearly resulted in their collapse. Thankfully, the club was able to renegotiate a new stadium deal last year after the entire board of the government authority, Stadiums Queensland, was replaced.

The lack of certainty surrounding a stadium deal was also a crucial reason as to why North Melbourne rejected the AFL’s offer to relocate to the Gold Coast in 2007. It was also subsequently, revealed by journalist Damian Barrett, that the AFL’s supposed $100 million relocation offer to North Melbourne was actually – at best – $32 million.

If McLachlan is to be believed, the AFL were in no way responsible for Gold Coast’s plight, therefore, the blame, according to the AFL, must lay entirely on the club’s shoulders. So, why on earth should they be rewarded for their own failings?

If the AFL is going to disadvantage seventeen of its clubs by awarding the Suns a priority pick at the start of the draft, it must accept its responsibility for its failures. Otherwise, it is merely rewarding a club’s incompetence and excusing its own.