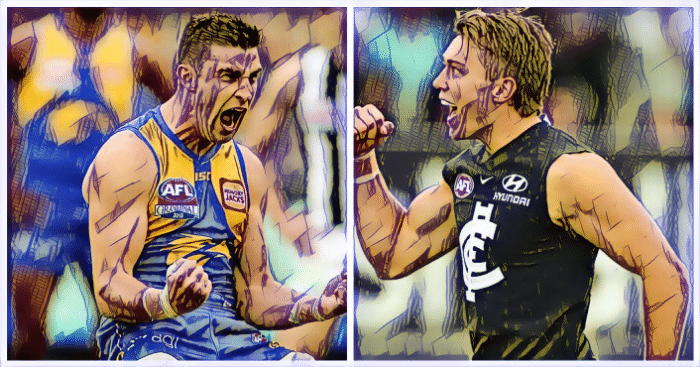 Footy is a funny game. After seeming a bit down for a the majority of the second half of the season, Patrick Cripps unleashed one of the most dominant midfield performance in recent history, racking up 19 clearances as part of his career-high 39 disposals against the Adelaide Crows.

Watching it, I was amazed not only at the skill and power of the Carlton captain, but at both the coaching and team selection of the Adelaide Crows, who did not select Hugh Greenwood – the obvious choice to run with Cripps and at least make it difficult for him to tear the game apart.

It’s something don Pyke will have to wear, and should be questioned about at length over the next few days.

But as so often happens, my attention drifted to what is on the horizon, rather than dwelling on what had just happened. Patrick Cripps just cemented himself in the All-Australian team with that performance, but looking at what’s ahead, I started wondering how he would replicate a performance like that against his Round 20 opponent – the West Coast Eagles.

Mark Hutchings is the obvious choice to go to Cripps should his hamstring recover in time. He was listed as having another week on the sidelines prior to this round, and for the first time everm I am hoping Hutchings doesn’t recover from injury in time to make Cripps’ acquaintance again.

Whilst Hutchings might be the Plan A for Adam Simpson, there is a very obvious Plan B waiting in the wings. As a football purist, it’s the option I hope is taken up by the Eagles, and readily accepted by the Blues and Patrick Cripps.

Elliot Yeo as a Plan B is better than just about every other team’s Plan A to put the clamps on Cripps. At 189 centimetres and 89 kilograms, Yeo is both shorter and lighter than Cripps. He is no slouch, but Cripps is, as has been pointed out so often, a key forwardbody doing things he shouldn’t be able to as a midfielder, However, there are other units of measurement that are not so easy to measure when you’re talking about the dual John Worsfold Medallist.

If Yeo gets the job on Cripps, I doubt we can expect the young Carlton champion to have the same kind of impact. Here’s why.

THE HEART OF A CHAMPION

It was former Houston Rockets coach, Rudy Tomjanovich after his team won back-to-back titles that said it best – “Never doubt the heart of a champion.”

Elliot Yeo is a champion of the modern game, and is never completely out of a contest. I watched with a huge smile on my face as he went after Ben Cunnington this past weekend. The North Melbourne bull, who plays a similar game to Cripps, used the fend off on Yeo to extract himself. The only problem was…. Yeo kept coming.

You see, he’s seen that before – last year when Dustin Martin tried the same thing on him, and he dragged him down in the middle of Optus Stadium as his Eagles ran over the top of the Tigers in a statement game. Whilst he didn’t drag Cunnington down in this one, he applied the pressure that set Cunnington backpedalling toward the boundary line. That fend off works on 95% of opponents.

It simply doesn’t work on Yeo because he refuses to allow it to work. He fights through it, and it is desire and hunger that driveshim to defeat the move that defeats so many others. Can he do the same to Cripps, who is a beast of a man?

Cripps does not use the fend like Martin or Cunnington, but what he does do, is raise the ball over his head and simply run through tackles. He backs his core strength and running power to shake tackles as his opponents latch onto him. Will Yeo fall away like so many others? Will Cripps be able to shake those hips like his name is Shakira and get rid of Yeo?

Yeo’s league-leading 133 tackles indicates that not many break their way out of his grasp once he grabs them, but not many players are as strong as Cripps.

The thing I love most about Elliot Yeo is his willingness to take on the big job. I mentioned his work against Dustin martin last season – I’ll be honest here, it was the first time I’d really sat up and thought that Yeo may actually be a special player.

Yes, I was late to the party, but I was there right after that game, chugging beers and surfing down the stairs with the best of them. There was an element of personal pride in that performance, and it was his ability to shut down the Richmond champion that made Yeo one of my favourite players to watch.

It was the same against Cunnington, only there was more of a team focus, with Luke Shuey doing some of the heavy lifting early in the contest. But when Yeo switched over to Cunnington at stoppages around the ground, he neutralised the Kangaroos’ most potent weapon, and it prevented them from gaining any momentum.

With Cripps looming on the horizon, and in white hot fan, a little voice may be ringing in the ear of Elliot Yeo. All the talk will be about Cripps in the lead up. Can he do it again? Can he lead his Blues over the premiers? Can he tear the game apart the way he did against the Crows?

If you’re Elliot Yeo, the answer will be a very firm NO!

HURTING THE OTHER WAY

Hmmm, that’s a bit of an ambiguous title, isn’t it? I should elaborate before some wanker on Twitter takes offence.

Unlike almost every accountable midfielder in the competition, Elliot Yeo not only puts the clamps on his opponent – he hurts them running the other way. With a huge tank, and elite running ability that was on show as he powered away from North Melbourne youngster, Jy Simpkin, taking a couple of bounces in the process and setting up one of Josh Kennedy’s seven goals, Yeo will break away and punish an opponent who decides to cheat a little bit and not give him the respect he deserves.

Whilst Cripps is hard at it in the contest, will he be able to chase the streaking Yeo as he gets the ball on the outside and takes off? Only a player like George Hewett in Sydney has the ability to run both ways like Yeo does – these kinds of players do not grow on trees.

What we have on our horizon is a matchup that will go a long way to dictating whether the Blues can continue their late season resurgence under David Teague, but more importantly, it will have a huge bearing on the final make-up of the top eight, and the top two.

The Eagles are set for the tilt at the flag, and the ability of Yeo to lock down on Patrick Cripps will be paramount in their quest to secure home finals.

Patrick Cripps was a monster against the Adelaide Crows, but Elliot Yeo can slay the beast. He’ll have to in order for the Eagles to halt the momentum of a Carlton Football Club brimming with something they have not had in a long while – genuine hope.