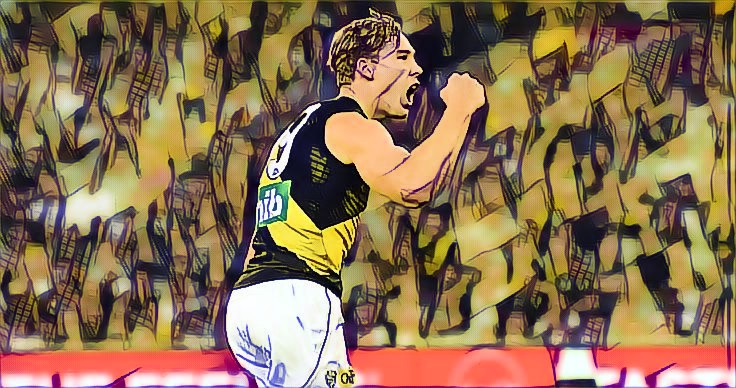 It takes a big man to admit he’s wrong… and for the most part in life, I am not that man. I will argue, ignore and use sleight of hand to manoeuvre myself out of having to admit it.

However, over the course of the last few weeks, there has been a fact beating me over the head at every turn. It is one I simply cannot escape, and will ultimately have to take ownership of. I suppose now is as good a time as there will ever be. Here goes…

Tom Lynch is one of the best forwards in the game once again. And prior to the start of the season, I really wasn’t sure we’d see this version of him again.

As a matter of fact, as he struggled to get near the ball and make second efforts after a month of good footy early in the season, those doubts started to creep back in. Seven touches and no goals against Sydney, eight touches and one goal against the Dees, and five disposals and goalless against the Western Bulldogs had the acquisition of Lynch looking like the kind of move the Tigers may have lived to rue.

He would add another pair of five-disposal games to his CV over the next month, and I have to admit, I furrowed my brown as he seemed unable to have any impact once a marking contest was spoiled.

But the last month of footy has seen a different Tom Lynch. He has not been held goalless since that Bulldogs game, and like his team, recent weeks have sounded a strong warning to the rest of the competition.

The Tigers have won four on the trot, and are starting to look like the formidable premiership contenders many predicted before the injury bug bit hard. Realistically, the fact that Richmond was able to stay in touch with the top teams whilst having so many star players out for extended periods is quite remarkable. And as the troops return, you had better believe they’re eyeing redemption for their 2018 preliminary final capitulation.

During this four game win-streak, standing tall has been their prized recruit, with his last two weeks sending a shudder through prospective finals opponents. Lynch has three goals in each of his last four outings, but it is the little things that would be forcing coaches to sit up and take notice. He has played like the All-Australian 2016 version of himself, and not the injury-riddled 2017/18 version i feared the Tigers may be buying into.

Amazingly, the spring in his step has returned. He is looking more agile than he did just a couple of months ago, and his hands in contested situations have come to the party. Lynch has taken 17 contested marks over the past five weeks, at an average of 3.4 per game. For context, the league leader is averaging 2.3 contested marks for the season. Oh, the league leader also happens to be named Tom Lynch, and also happens to play for Richmond. Has he lifted? Need more proof? Read on.

When was the last time a power forward led the team, or the game in contested possessions?

If you answered Round 18, 2019 and added that man was Tom Lynch, then pat yourself on the back and send me five dollars, because you’d be right, and I really need the money.

This sort of thing simply does not happen. In a game with names such as Tom Rockliff, Travis Boak, Dustin Martin and Trent Cotchin, it was Lynch doing the dirtiest of work, picking up 13 of his 19 touches in the contest. He is supposed to be the polish of the Tiger outfit; the finisher of the hard work of others, but there he was earning his kicks the good, old-fashioned way, and looking like a million bucks in the process. I don’t know about you, but for me this speaks of a young man eyeing his first AFL finals series with a hunger of any young man with the opportunity of obtaining something for the first time.

You all know what I’m talking about… I know you do.

Tom Lynch is morphing from a player finding his feet at a new club to the kind of player that could be the difference at the business end of the year. And I suppose I should say I am sorry.

Tom, I am sorry I doubted you. Richmond fans, I am sorry I was a pessimist about his impact on the team, how he’d gel with Jack Riewoldt, and whether his presence would upset an apple cart that was full of pretty damn good apples as it was. I was wrong… there, I said it.

And I have a feeling I may not be the only person feeling sorry in the near future.

Tom Lynch and his Tigers head into the marquee clash against the sputtering Collingwood Football Club this Friday night. With Darcy Moore still a few weeks away, the Magpies will be relying on a tremendous recruit of their own to limit the influence of Lynch. Jordan Roughead has had an amazing year, and it is probably just his lack of flashiness that is preventing his name being thrown around in All-Australian discussions. In Lynch, he faces his biggest challenge of the season.

In the biggest game of the weekend, on the big Friday Night stage, he runs smack bang into a white hot Tom Lynch. With Lance Franklin a shadow of himself at the moment, there may not be a scarier prospect in the current AFL climate.

The Tigers are preparing for a September assault and they have loaded up their biggest gun at the right time of the year.

Over the past two weeks, Lynch has arguably been the best Tiger on the ground in both games. As Richmond have found form, so too has Lynch, at the right time of the year. If the Tiger spearhead has anywhere near the 18.5 touches and three goals he’s been averaging over the past fortnight against the Pies, I am afraid the top four dreams of the Magpies may start to look less of a dream and more of a nightmare, whilst the premiership aspirations of the Tigers may start to look less like a dream and more like a reality.

It kind of makes you wonder whether those who thought Lynch’s move to Punt Road may have been a mistake would be feeling a little bit silly, huh?

I can answer that – they do. I was wrong.