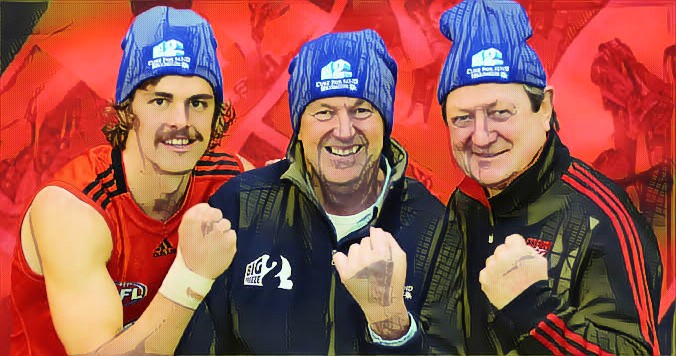 Any Given Mongrel – Neale Daniher

Some stories and histories are simply not as recognizable as the names they’re structured around. Some names are larger than life with their tales having been passed down over the years, enhancing a reputation as it transforms into legend.

However, quite often there’s more to their stories than what that old bloke chewing your ear at the bar has shared with you. Often there’s a ripper yarn to accompany that name that you’ve never really heard of, or an unknown chapter in the life of the legend you hear so much about.

Any Given Mongrel delves into those yarns, characters, legends and their stories.

There aren’t many names that instil inspiration among the AFL and its supporter base as a whole quite like that of Neale Daniher. Since the public revelation of his battle with Motor Neurone Disease in 2014, Neale has epitomized courage in the face of adversity – refusing to let “The Beast” as he refers to it, deter him from raising vital funds for the prevention and cure of the horrendous degenerative disease that will inevitably take his life.

Initially given just two years to live, he refused to accept his diagnosis as a death sentence, instead setting his sights on raising $40 million over four years to aid research in prevention and cure. To date he has currently raised upwards of $46 million in conjunction with his FightMND charity, and five years later is still defying the odds.

With all of the current publicity and media coverage, you’ll be hard pressed to find someone that doesn’t know of Neale’s struggles with MND, his efforts to raise funds, or recognise the trendy blue beanies that have taken over the winter headwear fashion scene in Victoria. However, this legend in every sense of the word, had a level of determination that was as prevalent 40 years ago as it is today – evident in his early playing career.

In March 1979 Daniher made his playing debut for Essendon against Carlton at Waverley Park. He amassed 22 possessions, and went on to play 23 games for the season (including the elimination final), earning nine Brownlow votes and was named as the VFL recruIt of the year in recognition of his impact.

Following a stellar debut season, Daniher played 22 games in 1980 and earned selection in the Victorian squad for State of Origin. He played 21 games under new coach Kevin Sheedy in 1981, including a match-winning individual performance against Carlton; a brief chapter that is a fond memory in Essendon folklore. Trailing by four goals in time on, the resident half back flanker was moved forward by his own suggestion (and at the expense of his brother Terry), kicking the final two goals of the game to see the Bombers take home the win by a single point.

Unfortunately after experiencing ultimate highs as a young up-and-coming star, his world would come crashing down the following week as he suffered a serious knee injury whilst playing South Melbourne. It was a knee injury that would in turn end his playing career prematurely.

Three years of football passed by (including the drought breaking 1984 Grand Final) with Neale failing to lace up the boots, sidelined with continued complications with his chronic knee injury. Despite this, he was named Essendon’s youngest ever captain for the 1982 season. Such was the belief in his ability and leadership, he was bestowed the captaincy at just age 21. Sadly, Neale didn’t manage to play a game as captain, as his troublesome knee continued to sideline him.

His remarkable comeback in 1985 was short lived, lasting only five games before succumbing to another injury to the same knee. With a further three missed years of football now ahead of him, Neale was still attempting to get his body right, but he once again succumbed to injury, and was at his worst physical point after having his third knee reconstruction in 1987.

Daniher mustered his first game in four long years, seeing his third return to football last four games in 1989. Playing only seven matches the following year still earned him his spot in New South Wales’ upset win over Victoria in State of Origin. However, no game of his career would mean more to Neale than what would incidentally be his last – lining up against St. Kilda at Moorabbin Oval alongside all three of his brothers (Chris, Anthony and Terry). It is the only time in AFL history that four brothers have taken the field in the same team during the home and away season. Neale kicked 3.4 for the day and finished his AFL/VFL career alongside his three brothers. His career stats were 82 games and 32 goals.

After 19 games, 44 goals and a Grand Final win playing for Werribee in the VFA/VFL in 1991, Neale took up an assistant coaching role at his beloved Essendon in 1992 under Kevin Sheedy – becoming an integral part of the Baby Bombers’ 1993 Grand Final win over Carlton. Daniher is widely credited with personally identifying a Carlton set play at centre bounces, his tactical acumen giving the Bombers the upper hand and trumping the Blues for the premiership.

1994 was the last season we saw Daniher at the Bombers before he joined the AFL’s newest franchise, Fremantle, as an assistant to inaugural coach Gerard Neesham in 1995. Come 1996, Daniher, still assistant coach at Fremantle, coached the Allies in their clash with Victoria in State of Origin. His final year at Fremantle in 1997 saw him coach the Allies to victory over Western Australia, before he was surprisingly chosen as Melbourne’s new senior coach ahead of hot-favourite, Peter Schwab.

Daniher miraculously took Melbourne from bottom of the table to fourth in 1998 with a team consisting of Garry Lyon, Todd Viney, Jim Stynes, David Schwarz and David Neitz, before dropping back to 14th in 1999. 2000 saw Daniher and his Demons have a renaissance culminating with a clash against his former side, Essendon in Melbourne’s second Grand Final appearance since their last flag in 1965. They would fall short against a rampant Bombers team.

Neale relished his new role as CEO of the AFL Coaches Association, also coaching the Dream Team in a marquee game against Victoria to commemorate 150 years of AFL football, before joining West Coast as general manager of football operations in 2008 – a role in which he remained until his health struggles become public, and he stepped away from the game in 2013.

From 2014 Neale dedicated his life to fighting MND and raising funds to help find a cure.

Neale Daniher is universally admired for his abovementioned determination, yet no-one admired him more than the coach who made him captain at age 21 – Kevin Sheedy. “He had great vision and tremendous courage,” Sheedy said. “As far as his courage is concerned, just let’s say he survived three knee reconstructions with his enthusiasm for football undamaged. Neale changed the spirit of Essendon.”

It would be all too easy to focus on the early tragedy of Daniher’s playing career, but Neale would never sink to seeing his life in that light.

“Feeling sorry for yourself is not the philosophy of the Daniher’s. We never did sit and navel gaze. That’s not the way you think growing up on the farm where animals die and floods rip through the place. As Catholics we were taught that there was always someone worse off than yourself,” Neale was quoted saying in 2000.

Thirteen years later when he stepped away from the game due to health reasons, we began to see the grit and determination of this unrelenting character all over again. The same values he has presented across his 40 years in football, he still shows now as he faces the hardest challenge of his life.