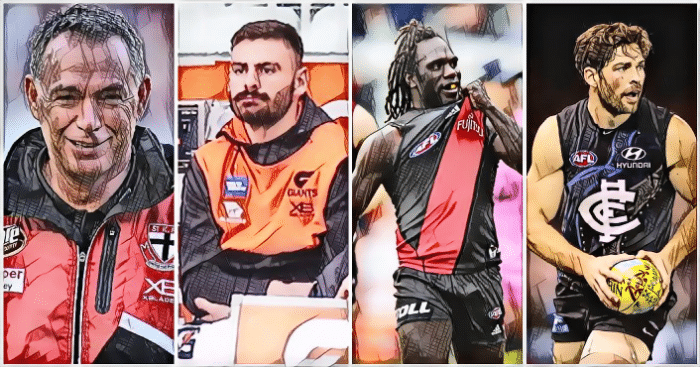 Ten Things I Learnt After Round 17

TEN THINGS I LEARNT AFTER ROUND 17

1 – When you write off the Pies, that’s when they rise.

On the back of two very mediocre performances, and staring down the barrel of another defeat trailing by 16 points at 3/4 time in front of a hostile Perth crowd, and against a highly fancied Eagles outfit, you could’ve been forgiven for thinking their Top Four chances were shot.  The Pies, however, had other ideas.  They dominated every facet of the game in the final quarter.  The Eagles were completely outplayed, and if the Pies had been more accurate around goal, the result would have been decided earlier.  This game just proves once more you can never write this group off.  They’ll be without their skipper for a while, but if this week is any indication, you can bet they’ll find a way to manage without him.

2 – Levi Casboult will be playing next year.

Levi languished in the VFL for the first six weeks, and there was a collective groan from Blues fans when he was brought into the side for Round Seven.  We’ve all been aware of his kicking woes, but even his trademark marking power seemed to be banished to the past.  After a couple of serviceable games, he was sent down back and began to shine.  His marking returned and he was beginning to grow in confidence.  The last three weeks, Levi has returned to the forward line and booted six goals, including a couple from outside 50.  Six weeks ago, his papers were all but stamped, but now it seems his value as a marking forward, key defender, and backup ruckman has all but made certain at least one more year for the big man.

3 – It looks like another wasted year for the Dockers.

The Dockers have now lost four in a row after being in a good position with a 7-5 record after an impressive win at home against Port Adelaide.  They would’ve expected to prevail over Melbourne and Carlton, and at 9-5 they would’ve been threatening for a Top Four berth.  Instead, they fell short and it’s all gone pear-shaped since then.  They’ve slipped to 13th, and if they were to go down to the struggling Swans in Perth next week, I imagine some would be questioning the tenure of their coach.

4 – McDonald-Tipungwuti is officially now a freak!

Make no mistake about it, Anthony McDonald-Tipungwuti was great all day, and his heroics kept the Bombers in the game when it looked like the game might slip away.  But in the dying stages, after the Kangaroos had taken the lead, that snap at goal from the tightest of angles splitting the middle was mercurial.  I’ve always rated him as silky with his skills, but on Saturday evening I believe he can be elevated to “freak”.

5 – The Gold Coast Suns can’t wait to see the end of the season.

It’s really hard to see any light at the end of the tunnel for the Suns.  It’ll be interesting to see what gets done by the AFL to assist this failing franchise.  Whatever the case, the Crows did as they pleased.  They amassed 476 possessions to just 302.  The Suns come up against an improved Carlton this week, and a loss makes the wooden spoon certain.  Is it time to pull the pin?

6 – The Saints are brave but it won’t save Richo.

You have to feel for the St Kilda coach.  They started the season so well, but a combination of injuries and inconsistency has seen them tumble down to 15th on the ladder with possibly worse to come.  His future at the club was based on playing finals, and nobody would’ve had the Saints playing in September.  Sure, maybe the coach gets moved on at season’s end, but what about the board and the recruiters who signed off on disasters like the Hanneberry deal?  Tough gig being an AFL coach.

7 – An injured knee might’ve cost someone a $1.4 million dollar a year contract.

Reports have had Stephen Coniglio being offered as much as $7 million for five years.  We don’t know how bad his injury is, but if it does turn out to be an ACL, can a club like Carlton afford to shell out $1.4 million for a player who would miss more than half of the 2020 season?

8 – The Tigers are eyeing off Top Four, but will percentage cost them?

They’re tracking nicely, and slowly but surely, the Tigers injury list is getting smaller.  There’s even talk Alex Rance may make an appearance in September!  The Tigers are currently fifth, a game and considerable percentage behind the Eagles in fourth place (113.3%).  Richmond has a percentage of just 104.9.  This means losses aren’t really an option.  One loss will make it tough, while two almost certainly guarantees they would finish outside the Top Four.  That said, it doesn’t seem to be such a big problem these days, and if their list is healthy at the right time, the Tigers are well and truly in it either way.

9 – The Dogs’ hopes of finals are still alive.

That’s now three wins in a row, and they’re a very good chance of winning the next two as well.  Like the Tigers, they have percentage issues too, so it will be hard for the Doggies as they can’t afford to lose more than one game to have any chance of slipping into the eight.  As for the Demons, they had their chances once again.  This will go down as a year where they clearly lost it in the off-season with so many players coming off surgery and an interrupted preseason.  You would hope to see them back up the ladder next year, but how much damage this year has done to the psyche of the club remains to be seen.

10 – Port Adelaide are incapable of playing two good games in a row.

Taking nothing way from the Lions, who were fantastic, particularly early, but the Power were woeful in the first quarter.  Their focus on trying to shut down Lachie Neale was borderline obsessive to the point they forgot about chasing the footy.  And, before you knew it, the Lions put the first seven goals on the board and it was game over.  Next week the Power come to Melbourne to face the Tigers.  If the trend of winning one week and losing the next continues, they may do the unthinkable, but I think the Tigers will be more than ready for them, and this time next week we might be saying that Port’s chances of playing finals are all but gone.