Blue Vests for Inappropriate or Inspirational?

Blue Vests for Inappropriate or Inspirational?

The balance between safety and Orwellian dystopia

One of life’s joys in my world is going to watch live sport. I loved playing and intend to enjoy swinging a golf club for decades to come, but watching elite sport is special to me. In fact, I get a little angsty if I go too long without it. I love how I can be watching a sporting event anywhere in the world and turn a stranger next to me and discuss a topic on hand freely with complete openness and connection. Its great fun!

I also love getting parochial. I am big, loud, and can be as one-eyed as any other supporter (i.e.. my team is always getting a raw deal.) It is also a good opportunity to catch up with mates and discuss everything that is going on in our worlds.

It is for all these reasons that my first reaction to the AFL’s Behavioural Awareness Officers at football games this week has been met with scepticism. The supporter nation has expressed its distaste to this initiative as there is a feeling in Australia that yet another layer of policing and surveillance has been introduced.

You can hear the sporting population crying out “What! Now, I can’t even go to a game of footy without being treated like a school kid!” The parallel to George Orwell’s 1984 are being drawn often, and this does not fill my heart with joy.

On the other side, there are harsh realities to face. Do we know how to behave? Are we good at self-regulation? Is it the small minority that ruin it for the rest? In the context of AFL footy, there have been an increased incident of fist fights at games in recent years (the Age). 2019, has been full of anti-social behavioural incidents and trend is not going in the right direction.

So, if the answer to the above questions was ‘no’, then what is the appropriate action to nudge us in the right direction?

A friend of mine from childhood, Brooke Taylor, works hospitality at Adelaide Oval during AFL games. She speaks of a heavy police presence that should be able to manage anti-social behaviour as there are already plenty of them at games. This on top of security guards dotted around the ground and in stands.

Yet, the AFL felt the need to add another layer of targeted security – the Blue Vested Behavioural Awareness Officers.

In my view it is clear that no one wants to be in any environment where they feel unsafe. So Inappropriate behaviour is what we want to eradicate. On the other end of the spectrum is the behaviour we want to encourage; I would suggest this is Inspirational behaviour. Then there is a large gulf in the middle with the centre probably being Vanilla (a generic term for boring or non-descript). 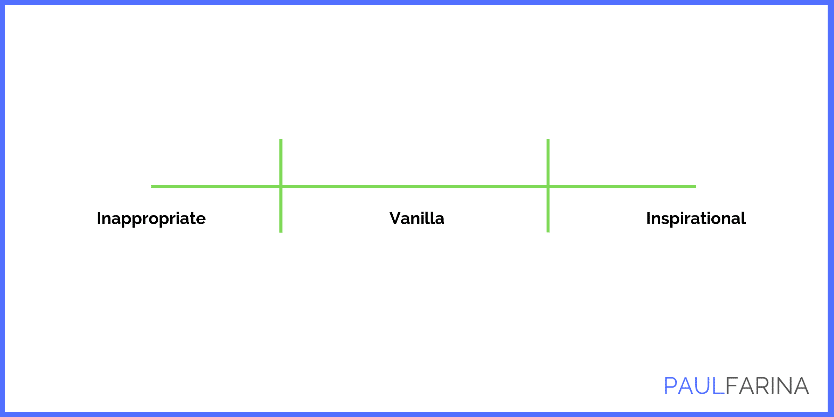 It would seem that the Inspirational has been left out of the discussion. Some of the comments in the media have displayed this. A good example is that of Jeff Kennett (ex-Victorian Premier, and current Hawthorn president) saying,

“I’m not being racist when I say this, but when I saw some of the footage, the people who are making judgments while they wear these authoritative coats, are not people who appear to have a great knowledge of our game.”

This is not helpful, and Kennett has apologised since. But there is one element in his comment that is near the mark. Stay with me on this.

In 2004, Portugal hosted the European Cup in soccer (like the World Cup, but for European Nations). The Portuguese were readying themselves for an invasion of English fans (called Hooligans) that would travel in mass and had a reputation as the most thuggish in the world. Riot gear and water cannon tanks were being marshalled ($21 million worth!). Aside to this they also enrolled other help. Clifford Stott, a crowd violence expert was drafted in to help. He implemented Blue Vests, coincidentally as the AFL have done. But in a very different way and with greatly different results.

1.       No riot gear – this signals war. It signals get ready to fight. The exact opposite message to send the crowds.

2.       Select the right people – he did not select officers for their riot control skills, but ones that had good social skills. They could have a friendly chat and strike up conversation.

3.       Study – all of these officers were encouraged to study the teams, the players, the coaches, and form guides. This is the bit Kennett was on nearer the target on – game knowledge is crucial to be able to interact in a way to signal positive behaviours.

4.       Intervention – policing at the level the crowd saw as appropriate, not a level the police saw as appropriate. This was the toughest initiative to get the team behind. It seemed illogical but proved essential. This would eradicate feelings of injustice and violent responses.

The result was that over a three-week period, Portugal welcomed over one million fans and there was only one arrest of an English supporter. There were 2000 police-crowd interactions reported, with only 0.4% qualifying as disorderly. The only violence experienced was in areas where Riot Policing was still being utilised. In fact, one incident occurred in Portugal where English fans asked the Blue Vests to sort out another policeman who was using force on a punter. The Hooligans were now policing the police’s behaviour!

In 2008, they literally wrote the handbook based on Stott’s and other’s work called Policing football in Europe. Not everything translates, but Gillon McLachlan (AFL CEO) could do with including this in his bedtime reading.

The big lesson I take from this is that when the police, security, and the crowd have a sense of shared purpose, the Inspirational behaviours are encouraged. Everyone is on the same side.

This provides us all with an opportunity to reflect on our teams and organisations where all too often there are heavy handed tactics to ‘Vanilla’ everyone’s behaviour instead of encouraging Inspirational behaviours.


Got anything to add? Make sure you hit us up on our social media, or give us a yell in the comments below. Oh, and if you’d like to support the site, you could always become a patron of the Mongrel.