At the 20 minute mark of the first quarter Brisbane were 29 points down and in a bit of trouble. Their opponents had kicked five unanswered goals off the back of some strong clearance work and  uncharacteristic errors by Luke Hodge and Harris Andrews. The Hawks started with Luke Breust and Chad Wingard in midfield which seemed to unsettle Brisbane and deliberately grubbing entries inside 50 made it hard for their tall defenders to compete.

A concerted effort by Jack Gunston (opposed to Darcy Gardiner) and  Jonathan Ceglar (Harris Andrews) to drag their men up the ground was creating space for goalscorers Breust, Impey and Wingard to run into and wreak havoc. Liam Shiels was holding his own against Dayne Zorko; Jaeger O’Meara likewise in his battle with Lachie Neale and Ricky Henderson was finding plenty of the footy, kicking a superb goal following a hurried clearance by Gardiner. But this Brisbane side don’t lie down and despite finishing the first stanza goalless, the last four scoring shots were a sign of things to come as the Lions wrested control of the contest.

Cam Rayner kicked their first goal five minutes into the second term following a poor clearing kick from James Sicily, and by this stage Lewis Taylor and Jarryd Lyons were starting to get off the chain. The latter set up Rhys Mathieson for the Lions’ second major and went close to kicking one himself before a Burgoyne smother on Hipwood saw James Cousins follow up and kick truly on the run.

But the critical moment of the term saw Charlie Cameron (well held at this  stage by Ben Stratton) sprint 35 metres to run down Tim O’Brien. The resulting goal cut the margin to 13 points and the game felt like it was now being played on Brisbane’s terms. Lyons was on his way to six clearances for the half, Neale was getting the better of O’Meara and Stefan Martin was proving a handful up forward, shrugging off attempted tackles by Sicily and Worpel to set up Taylor before outpointing Jon Ceglar in a marking contest.

Fortunately for the Hawks, another clutch smother from the ageless Burgoyne thwarted what looked to be certain goal to Ben Keays, the following full ground transition ending with a goal to Scully in the shadows of half time. 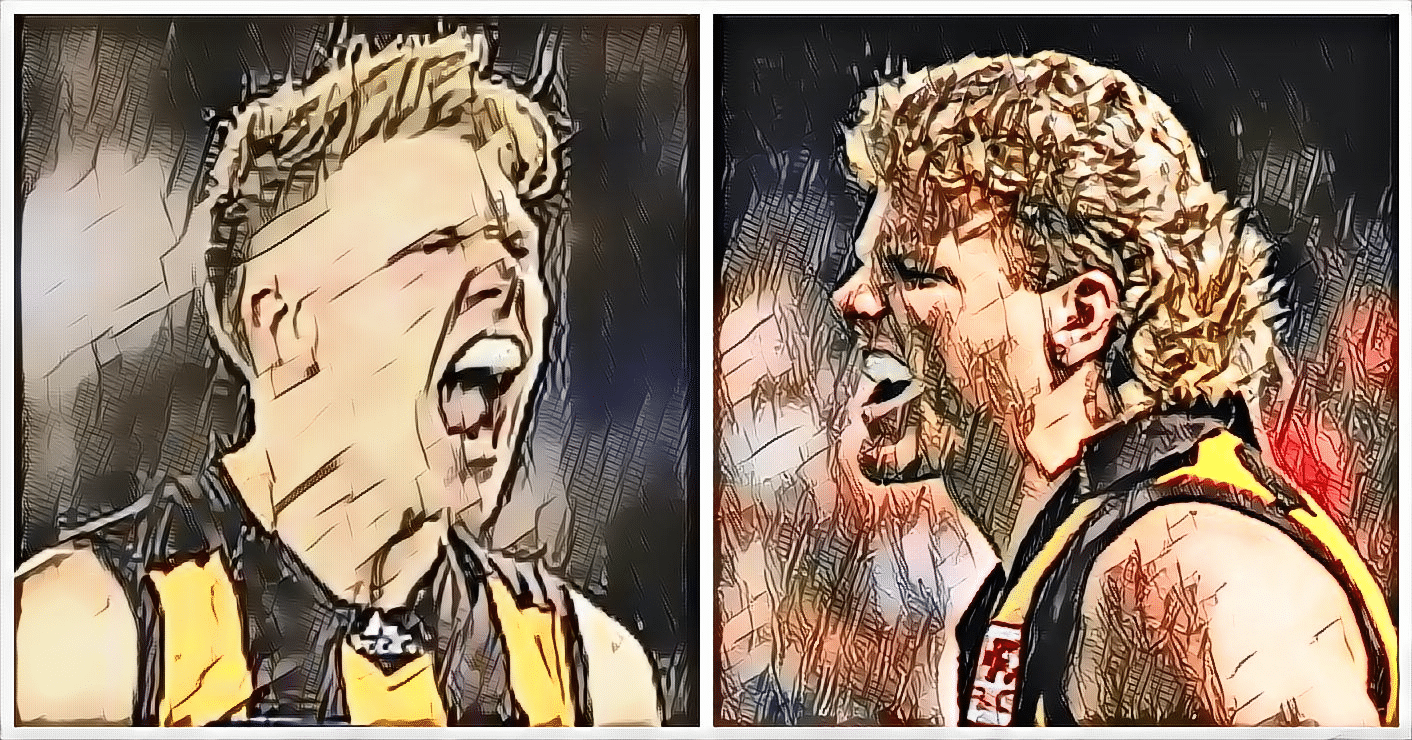 What is going on with James Sicily? The Mongrel takes a look at the Hawk’s latest indiscretion in this Patron-Only column. Link will say “per creation” but it’s actually per month. Dumb wording… apologies.

The opening goal of the second half had Ceglar marking deep forward and converting a difficult shot but any momentum was short lived as a stunning piece of improvisation by Mitch Robinson saw him sweetly meet a tumbling ball on the half volley. It subsequently found its way to Charlie Cameron via Archie Smith and Hipwood and the Hawks lead was cut  to a solitary goal.

Three of the next four majors went Brisbane’s way  (including one to Mathieson after the three quarter time siren) and by now Harris  Andrews had stamped his authority on the contest. Time after time, Andrews repelled Hawthorn attacks with astute judgement and courage, and was the most influential player on the ground in the premiership, quarter.

Ultimately the Lions were just too strong inside the contest and in transition, a three goal to one final term capped off with a 70 metre goal to Zorko from well inside the centre square iced the game and sees the Lions well placed to feature in September.

O’Brien was one of Hawthorn’s better players, nullifying Hipwood’s influence and using the ball well coming out of defence. Hipwood did outmaneuver him to kick an important goal in the final quarter but O’Brien halved the majority of their duels.

Stratton turned back the clock, keeping Cameron relatively quiet and annoying the bejeezus out of him in the process! I did like Cameron’s willingness to work defensively to insert himself into the game but overall Stratton was his master.

These two went head to head all night. Neale had 30 disposals at 86% with six clearances and five inside 50s, with O’Meara managing 21 disposals, five  clearances, five inside 50s and (a game high) 11 tackles. Neale was prolific from start to finish, even when his side was struggling, so he gets the chocolates.

Henderson has been in rare form in 2019 but he had his colours lowered by the feisty Robinson who managed to restrict Henderson to just 19 disposals, while finding the footy 22 times himself. Both players kicked a goal but Robinson’s four inside 50s, five rebound 50s and four tackles outshone his opponent.

At quarter time Breust was one of the best players on the ground and Robertson looked off the pace. However, if Breust thought he was finally turning the tables on his tormentor he was in for a rude shock. The  Hawk barely doubled his quarter time possessions (5) and didn’t kick a goal in the following three quarters. Ouch!

The best three on the park

Lyons was the architect of the Lions’ resurgence in the 2nd term, busting the game open with his run and carry through the centre of the ground. Lyons’ ability to find space and exit stoppages at speed made him the most damaging player on the ground. What a recruit! 33 disposals, eight clearances, nine inside 50s, two goal assists.

Played like he had a point to prove and was immense when the game was in the balance.

Kept Jack Gunston goalless and had seven rebound 50s and a couple of clearances to go with his 21 disposals. Bleeds for the team. He’s a beauty.