Collingwood saluted in this 50th Friday night Sydney blockbuster against a gallant Swans side in what was a highly entertaining match.The home side enjoyed a big advantage at selection, welcoming back their champion co-captain, Josh Kennedy, and superstar Lance Franklin, meanwhile the Pies lost Langdon and Varcoe, while Moore, De Goey, Elliot and Adams were still on the sidelines.

Both teams donned stunning indigenous inspired guernseys as part of the Sir Doug Nicholls round celebration, a black swan adoring the Sydney strip, while a predominantly black jumper designed by Travis Varcoe’s sister-in-law was proudly worn by the Collingwood side.

These two clubs have enjoyed a fierce rivalry in recent times, as much for the heart-stopping finishes as much as the off-field incidents predominantly borne from the mouth of outspoken Collingwood president, Eddie McGuire. Tonight was to prove no different, at least on the field anyway.

Aliir was a constant presence in the Swans backline all night, regularly killing Collingwood forays with his athleticism and brutal physicality. Pendlebury oozed class as he found Jaidyn Stephenson on the lead twice with surgical precision, but the overall poor goal kicking let Sydney off the hook before Sam Reid capitalised on a hurried kick forward by Kennedy with a well-timed tumbling mark and goal.

Mihocek wasted opportunities as his strong marking and hard work went unrewarded. The difficult conditions as described by Pies coach, Nathan Buckley as resembling two hours’ worth of rain made ball handling difficult and the early going was very congested.

A weak tackle by the returning Daniel Wells allowed Franklin to stroll through the 50m arc and slot his first of the night, but that was the last mistake Wells made as he electrified the away crowd creating three goals in the first half and handling the greasy conditions with a clean set of hands. His knee injury early in the third was a turning point and coincided with the Swans gaining ascendency.

Luke Parker and Kennedy began to get on top of the stoppage situations, and their direct opponents. Adam Treloar, despite winning 38 possessions, went at below 20% disposal efficiency by foot, and Dayne Beams who goes to ground far too easily, looks half the player who wore a Lions jumper last season. Both were largely unremarkable players on the night. I pondered as the match wore on how long Bucks will persist with Beams when someone like Sier would offer more inside grunt and youthful exuberance to complement the outside running of Philips, Aish, Brown and Maynard.

Kennedy also suffered a knee injury, and with Hewett forced to have an early night after a head-knock, Sydney started to look a little short through the middle. Young Callum Brown was the main beneficiary of the shortfall, able to run forward to slot two excellent goals. The first from a snap after a crunching Stephenson tackle, the second perhaps with mild umpire assistance as he looked to have run well over the 15m allowance from a centre break to take back the lead in the last quarter. He would’ve had a third if not for a clumsy attempt to shepherd by Will Hoskin-Elliot on the goal line reversed the decision late in the final stanza.

The ruck battle was an interesting one, although behemoth Brodie Grundy clearly took the points against Callum Sinclair, mostly on the back of 64 hit outs, with 16 to advantage. However, Sinclair kept him honest around the ground limiting his impact to 18 possessions, while collecting 11 himself, and should have added a goal to really take the game down to the wire. It was a good response from Sinclair, who was getting monstered at stoppages and copped a mouthful from Longmire on the bench at one point after Grundy took clean possession from a ruck contest.

Clarke followed up his straitjacket job on North star, Shaun Higgins with another memorable performance, curtailing the silky Sidebottom and limiting him to just 13 touches. Meanwhile the lightning speed of Stephenson proved too much for Swan star Dane Rampe who literally couldn’t keep up and ultimately handed the win to the streaking Pies with an almost weekly brain fade late in the game.

The Swans were well served by Sam Reid who was brilliant all night. His contested marking was a thing of beauty, and his straight kicking was in stark contrast to almost every other player on the park. He may live to regret his decision to square the ball to Will Hayward in the last when he was within scoring range and had the hot hand. They will also take some joy out of the continued improvement of young Nick Blakey, whose powerful running, neat disposal and willingness to put himself in contested situations belies both his age and anaemic frame.

For the victors, none were better than Levi Greenwood who seemed to thrive in the dewy conditions, claiming 11 intercept possessions amongst his 21 for the match. He took a towering pack mark and continually took the game on by driving the ball through the middle of the ground where the Magpies could spread the defenders with their precise kicking. Pendlebury, Grundy and Philips were all enormous for the Pies, with Chris Mayne especially important as link man, visionary and showstopper as he iced the game courtesy of the aforementioned Rampe howler.

Special mention must go to Roughead who stuck to his task on the dangerous Franklin with great resolve, never allowing him to get time or space in dangerous positions and keeping him to just two goals, both from open play via mistakes from his Collingwood teammates. 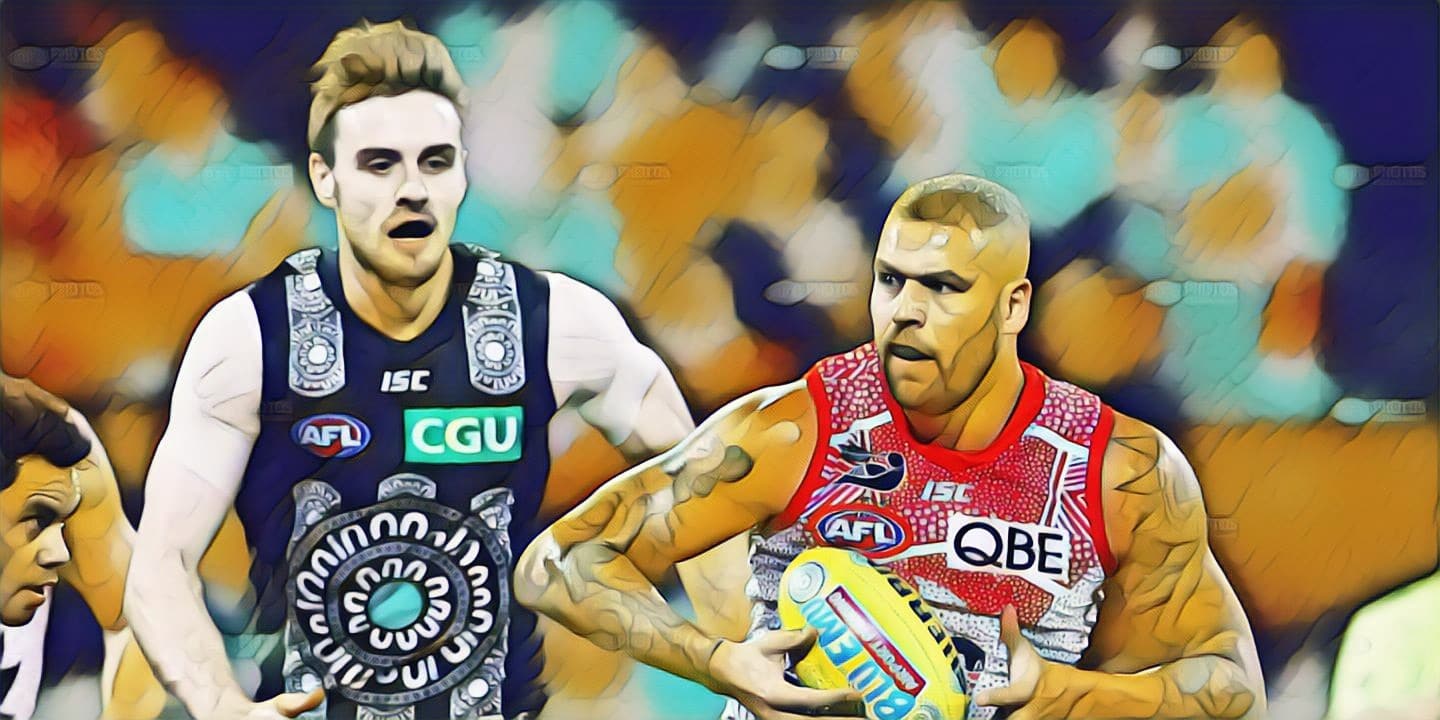 Click here to head to our deep dive on the Roughead v Franklin clash. every contest, every result, as well as analysis of the lowest disposal output from Buddy since 2009.

Collingwood move to equal top position, with the Cats having a game in hand, securing a seventh-consecutive win. They host the Dockers at the MCG next Saturday with another opportunity to put some distance between themselves and challengers to the top four. The Swans remain anchored in the unfamiliar depths of the ladder and will have to pick themselves up before traveling to GMHBA Stadium next week. That ground should hold no fears though as they are one of the few sides to have a positive recent record there.

TOP FIVE – THE MOMENTS THAT MATTERED

Two contentious decisions were made during the night in an otherwise solid outing by the officials in fluorescent yellow. A deliberate out of bounds adjudication was paid against Howe for knocking the ball against the point post in a situation that seemed to leave Howe with scant options.

The umpire explained that, as it had not gone through the points it was therefore considered deliberate as per the rules that govern the rest of the ground. This was the correct interpretation, although I’d love to see the rule consistent for all boundary lines, whether they double as the goal line or not.

The second decision was made through consultation with the boundary umpire to not pay a clean mark to Luke Parker. The field umpire initially paid the mark before checking with the boundary official if the mark was completed over the line. In this instance the ball was not juggled to completion but paid as he had enough control at the time the umpire paid the mark. The fact it subsequently went out of bounds was moot. If that had occurred on centre wing, I suspect it would have rightly been paid as a mark.