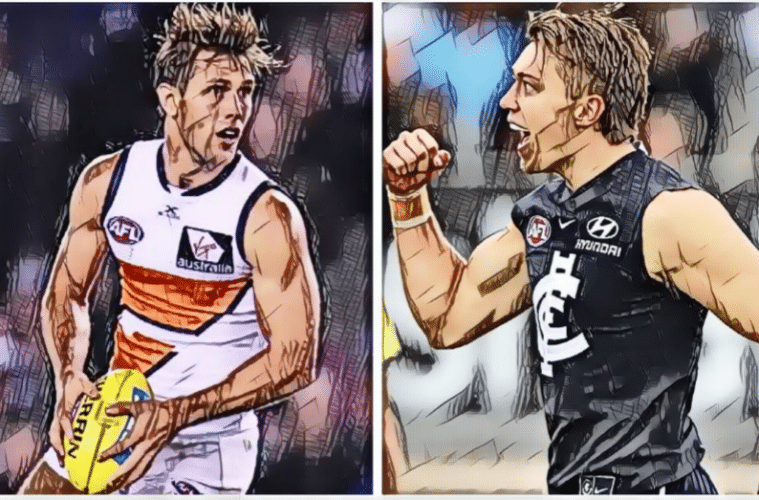 It was Round Three this season when Matt de Boer put the clamps on Richmond superstar, Dustin Martin. It resulted in some of the more bizarre moments of the season to date, with Dusty letting Shane Mumford know all about his thoughts on the big man’s after hours activities in one instance, and delivering an elbow to the head of his tagger in another.

De Boer got to Martin in a way a tagger is meant to get to a superstar of the game, and in a way a superstar should not allow him to. De Boer got inside Dusty’s head, and not for the first time, Martin reacted poorly. Already unable to replicate the form that saw him lauded as the best player in the game, a frustrated Martin lashed out at his nemesis.

De Boer won the battle. The Giants won the war.

It was a stark reminder to the league that there was definitely still a place for taggers in the modern game, particularly when they were able to influence a game the way de Boer did. He was applauded for his efforts by some, and lambasted by others. Some prefer to see the stars of the game run free, and have their talents on full display at all times. Others are realists, and know that winning is more important than a start being allowed to shine.

Interestingly, de Boer did not feature at all in the coaches’ votes at all for his job against Martin, despite his role being integral to his teams’ success. It started me wondering whether there is the perception that it is easier to stop a player than it is to go out and accumulate touches? The coaches seem to think so.

But as we find Carlton visiting Giants Stadium this weekend, the role of de Boer will be critical to the success of his team again, whether he accrues votes in the process or not. This week he runs into the clearance machine known as Patrick Cripps, and his mettle as a tagger will be truly tested.

It’s not often in the modern game that we get to see a true head to head clash. We’ve been lucky this season; with Darcy Moore moving to the position he was supposed to fill last year, we’ve been fortunate to see two legitimate star-studded contests with Moore taking on Joe Daniher and Charlie Curnow in marquee match ups, the former eliciting memories of the great Peter Knights v Paul Vander Haar battle at Windy Hill at times. De Boer taking on Cripps is probably not on the same level as those just mentioned, but it will be pivotal in the game itself as we conclude Round Nine.

Carlton boast a plethora of former GWS players on their list. Will Setterfield, Caleb Marchbank and Lachie Plowman are but three players Stephen Silvagni has managed to poach over the last few years, but the Giants have been able to retain big name players, and replenish their list on the fly with talented young stars. The Blues were right in the running for the want-away star, Dylan Shiel just six months ago, but instead of hacking the ball for Carlton, he is showing the Bombers why the Giants weren’t too upset when he decided to leave.

But as the Giants have lost young stars, their ability to attract de Boer to the club has been just as important as the retention of their signature young stars. They have recruited a player who fills an important role – a role that is often overlooked in the modern footy landscape.

Carlton have shown improvement this season, but they still live and die by just how far Patrick Cripps can carry them. We’ve seen him put his side (and smaller opposition players) on his back at times, and power the team to a competitive level. He’ll have to do it again on Sunday, with an opponent hanging off him all day.

Daniel Howe had some success against Cripps earlier in the year, and Jack Ziebell took responsibility for Carlton’s star when the Kangaroos took the Blues to the cleaners just a couple of weeks ago. Whilst Cripps was still able to accumulate impressive stats (28 touches and seven clearances against Hawthorn, and 25 disposals and nine clearances against North), the attention of his opponents clearly impeded his ability to influence the contest at crucial moments. Our own Cam Read awarded Howe three votes in the game against the Hawks, such was his success in limiting Cripps and enabling the Hawks to storm back into the game. Ziebell did something similar early in the piece against North, but the close attention of De Boer is another matter altogether.

Tim Kelly has been a revelation in 2019. Taking his sterling 2018 form and building on it has helped propel Geelong to top spot on the ladder. Make no mistake – much of the Cats’ 2019 success is due to the influence of Kelly in the midfield. There are those who speculate that he’d be leading the Brownlow at this point of the year, but there’s one game where he will not have been awarded any votes.

That was against the GWS Giants.

That was with Matt de Boer paying him close attention.

Kelly had a season-low… scratch that – Kelly had a career-low nine disposals with de Boer nipping at his heels, completely unable to have any influence on the game. It’s no coincidence that this is the only defeat for Geelong in 2019. With de Boer putting the brakes on the smooth-moving Cat, Geelong were stopped in their tracks and the Giants recorded their first ever victory at Kardinia Park.

Zach Merrett has a season low of 16 disposals in Round One. Would you care to have a wild guess as to who was running with him on that day? Merrett’s next lowest total for 2019 is 26 disposals. Matt de Boer strikes again.

De Boer is an immovable object. He will not be distracted from the job at hand, and will not flinch when faced with the repercussions of him doing his job successfully. Whether it is Dustin Martin elbows, or Paddy Dangerfield swinging his arm back at him, de Boer knows that every act of violence towards him is proof that he is doing exactly what he should be doing – frustrating the player he’s standing next to.

Patrick Cripps is the irrestistable force, powering into stoppages to get his hands on the ball, and releasing running teammates in the process.

Rarely does a one-on-one match-up, particularly in the midfield, have such significant implications for the entire game. Most teams have two or three strings to their bows in terms of quality ball-winners at their disposal. While Carlton have Marc Murphy and Sam Walsh both averaging over 25 touches per game this season, neither can do what Cripps does for this team. Walsh gets 3.8 clearances per game. Murphy gets just 1.9.

Matt de Boer will have his work cut out for him this Sunday at Giants Stadium. He will attempt to grab Carlton’s raging, ball-winning bull by the horns, and limit his impact. Whether he does or not will go a long way to deciding the result.

Patrick Cripps is the irresistible force. Matt de Boer is the immovable object. Something will give at Giants Stadium on Sunday, and I’ll be watching to see what it is.

If you’d like to support the site, you could always become a patron of the Mongrel. You get extra content, a look at the Weekly Power Rankings, and input directly to our site. We get to survive, and really appreciate the support.