Why Does Eddie Hold Power Over The AFL?

Sometimes families do not see eye to eye. That is the case in real life and in football. But in the footy world it’s not differences that are contentious, it’s the similarities that are the problem. Well, that is certainly the case for the Magpies; one that has turned into the Power and the other that appears to have the power.

Collingwood and Port Adelaide were traditionally sister clubs. It’s not difficult to understand why that is the case. The shared black and white colours, the parochial supporter bases, the traditional rivalries they created, the hatred, the arrogance – often backed up by success.

It was hardly uncommon for Port Adelaide supporters in the SANFL to have the “Victorian Magpies” as their VFL team and vice versa. The two clubs also shared many of their greats including Mark Williams, Greg Phillips, Bruce Abernathy and Port Adelaide supporters would even claim the great Nathan Buckley. Port Adelaide legendary coach John Cahill even had a short stint at Collingwood where he did not add to his enormous premiership tally but did guide the Magpies to a preliminary final. He then returned to Alberton to steer Port Adelaide into the AFL. In fact, the connection between the two clubs was so strong that Port Adelaide cult hero Scott Hodges still maintains his allegiances to Collingwood in the AFL rather than Port Adelaide, even though he never played for them.

So, why aren’t the two clubs now getting along? It’s not that prison bars fiasco again, is it?

Collingwood President Eddie McGuire, not the AFL, has again signalled his intention to block Port’s request to wear its iconic ‘prison bars’ jumper (that is similar but different to that Collingwood’s) to celebrate the club’s 150th anniversary. The Power wish to wear the guernesy, currently worn by its SANFL side, from next year onwards in Showdowns against the Adelaide Crows.

However, McGuire said that Port Adelaide need to come up with an alternative to the black and white prison bars that does not “offend” Collingwood such as changing the guernesy’s colours to teal and magenta. Port Adelaide finds this proposal disrespectful and will not consider it, despite McGuire claiming his proposal would “bring the clubs together” … by separating their colours? Why must football families be so complicated? 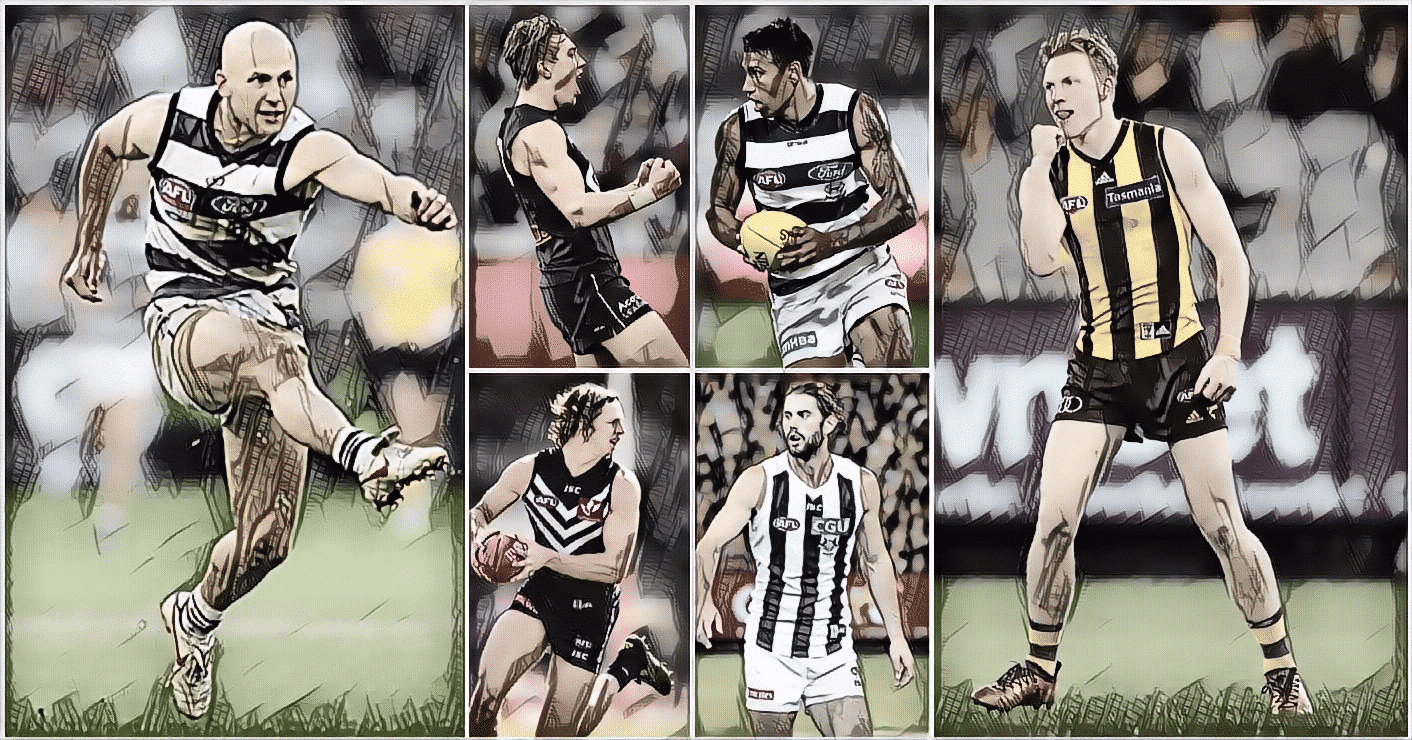 Who is #1 in The Mongrel’s Player Power Rankings after Round Eight?

Port Adelaide can rule out its dream of reviving the prison bars for all Showdowns effective next year. Its best-case scenario is convincing McGuire to allow the jumper to be worn – just once – in its 150th anniversary season in 2020, in its home Showdown. Whether the prison bars will be confined to the Port Adelaide museum once the planned AFL Reserves Competition enters the fray in either 2021 or 2022, is another subplot still to be determined.

Moreover, McGuire went on to say that Collingwood “will do whatever we can to try and make it a spectacular celebration of a mighty club’s 150th.” Surely, simply allowing the Power to wear their traditional jumper as a once off would be the least they could do?

However, it’s a bit more complicated than that. McGuire claims he has a deal in place with Port Adelaide and the AFL that gives Collingwood the rights over the jumper. But Port Adelaide has continually denied that such deal exists while it has just been tumbleweeds from the AFL on the matter

Although, there may not be an official agreement per se, Collingwood and McGuire still ultimately hold the cards in the conflict. This is because “the AFL would prefer (McGuire) accept the concept rather than condemn and criticise it,” as The Advertiser’s Michelangelo Rucci told this author.

But at some point, AFL Chairman Richard Goyder or CEO Gillon McLachlan or anyone in a position of authority at the AFL surely need to stand up. It should not be that hard for the governing body to – well – govern?

However, McGuire’s power is not be underestimated. His enormously successful career includes being the inaugural host of The Footy Show. The Footy Show, now no longer in production, was a phenomenal show that changed a dwindling sport to a commercialised entertainment-based industry. McGuire is also the longest living club president who transformed Collingwood from a basket case to a sporting superpower. By any measure, McGuire is one of the most influential Collingwood figures in the club’s long history. Eddie also holds prominent media roles on Fox Footy and Triple M. His media company JAM TV produces shows such as the long-running Sunday Footy Show and Footy Classified, as well as Channel 7’s coverage of AFLW and AFLX. In fact, the CEO of McGuire’s JAM TV is Cos Cardone, a Port Adelaide board member, it’d be interesting to see where he fits in the Power’s battle against McGuire.

In a recent interview on SEN SA, McGuire threw the first grenades towards Alberton.

“We’re not narks, we’ve always said ‘yes’, but what we don’t like is when people pull your pants down at the same time. When suddenly there is more and more black and white. At some stage, you have to say ‘guys enough.’”

However, in that same interview, McGuire said “I don’t want to make it sound like they have to ask for our permission.”

Port Adelaide may not need to directly ask for McGuire’s permission but they will need his blessing for them to proceed as he clearly has a significant and ultimately overriding say on the affair.

McGuire continued in his extraordinary radio interview claiming there was a trademark issue with the “Collingwood Magpie” being used on Port Adelaide scarfs. The Collingwood Magpie. You can almost hear the shudders from Alberton.

The new club was created amidst fears amongst SANFL clubs of the potential loss of revenue of not having a “Magpies” team in the league, which accounted for approximately 30 per cent of the supporter base. Therefore, despite Port Adelaide not wishing to continue to participate in the SANFL after joining the national competition, the SANFL, who owned Port Adelaide’s AFL license, forced them to field a team. However, the new club had to be entirely independent from the original Port Adelaide Football Club, in both its on and off field operations as rival SANFL clubs feared that otherwise the Magpies would possess an unfair advantage.

Why is any of this relevant? Because Port Adelaide did not try and run the PAMFC out of business. It saved the hybrid club from going under by merging with them in 2010, despite rival SANFL clubs repeatedly voting down the move.

Furthermore, what exactly is the big deal with a team wearing a guernesy on special occasions that contains the same colours of another? Port Adelaide will wear its blue and white horizontal stripped jumper once in 2020 to celebrate their 150th anniversary. That guernesy was Port Adelaide’s original jumper worn in 1870 and was used during the 2005 AFL Heritage Round. The design is practically identical to Geelong’s current home strip, but they have never objected. So, why exactly is Collingwood any different? More importantly, why should they get any special treatment?

How did all this unpleasantness surrounding the prison bars start anyway? Like many parts of Port Adelaide’s AFL story, it can be traced back to 1990 and the club’s unsuccessful AFL bid. At the time, the SANFL and its clubs were lobbying AFL clubs to vote against accepting Port Adelaide into the AFL for season 1991, as prior to 1993 the AFL clubs effectively governed the league, not the AFL Commission. Then SANFL President Max Basheer was successfully able to con then-Collingwood President Allan McAlister over the phone into believing that Port Adelaide will always wear its prison bars jumper, even for away games against Collingwood.

Max Basheer recounted the conversation in 2017 on FIVEaa.

“This business of Port Adelaide, it’s not fair to Collingwood that they’re going to use black and white and that they won’t agree to an away strip…”

“Over my dead body!” was McAlister’s response.

However, Port Adelaide, who believed it was one vote short of securing a 75 per cent majority of AFL clubs, was unable to clear up the misinformation fed to Collingwood. This was because a legal injunction carried out against it by Glenelg, Norwood and the SANFL prevented the club from speaking to the AFL or any of its clubs.

Moreover, when Port Adelaide was successfully awarded the second South Australian based AFL license in 1994, it agreed to adopt a new set of guernesy designs as well as new colours and a new nickname. However, there was a twist, and it came in the form of Collingwood President Allan McAlister’s letter to then Port Adelaide President Greg Boulton dated 1 September 1995.

“We at Collingwood are most grateful for Port Adelaide accepting it should enter the AFL with a change from its black-and-white colours and Magpie name which we hold dear to our hearts at Collingwood.

I will reiterate to our board that if the Port Adelaide Football Club should succeed at ranking higher than the Collingwood Football Club for three consecutive years in the AFL then our objections will be waived.”

Port Adelaide ranked higher than Collingwood on its first five consecutive years in the AFL from 1997 to 2001. Meaning, Collingwood did not honour its agreement, and the prison bars remains as decisive an issue as it ever has been. But what hope do Port Adelaide have when Eddie powers over the AFL?