Jack Riewoldt – The Bright Side

As Jack Riewoldt crashed to the turf after sustaining a heavy knock from Jake Carlisle there was a sense of déjà vu.

It was 2011 when Riewoldt was helped off the ground after a heavy clash against St Kilda again – that time he landed heavily in a marking contest in the first quarter, and took no further part in the game.

Much to his chagrin.

A lot of water has passed under the bridge at Richmond since a younger, less-settled and more demonstrative Jack Riewoldt crawled up the interchange race like an injured Tiger hopelessly stalking prey he could not catch. Riewoldt was concussed, and obviously not in full control of his faculties. He argued with the trainers, the doctors, and anyone who’d listen. He pouted on the bench like a petulant child who’d dropped his ice cream and was told he couldn’t have another. He looked like he could follow the example of his then-better known cousin and shed a tear or two sitting on the bench. This was not the way he’d envisioned his 2011 season panning out.

He was a wounded tiger that day, lashing out at those around him. His pride was damaged as much as his body, and it took more hits as the season unfolded. He had a heated exchange with the Hawthorn bench in Round Three as the Hawks put the Tigers to the sword by ten goals. Riewoldt was admonished by Damien Hardwick for giving the Hawks’ bench the middle finger in that game. It was the same match he had stern words for the young Dustin Martin, screaming at him during play for doing something not to Jack’s liking.

The perception of Jack amongst the AFL fandom was that he was a selfish, whiny player. It seemed as though it was either his way or the highway. He was the one barking instructions to and at teammates and either standing with hands on hips when things didn’t go his way, or screaming his disapproval when he didn’t receive silver service. 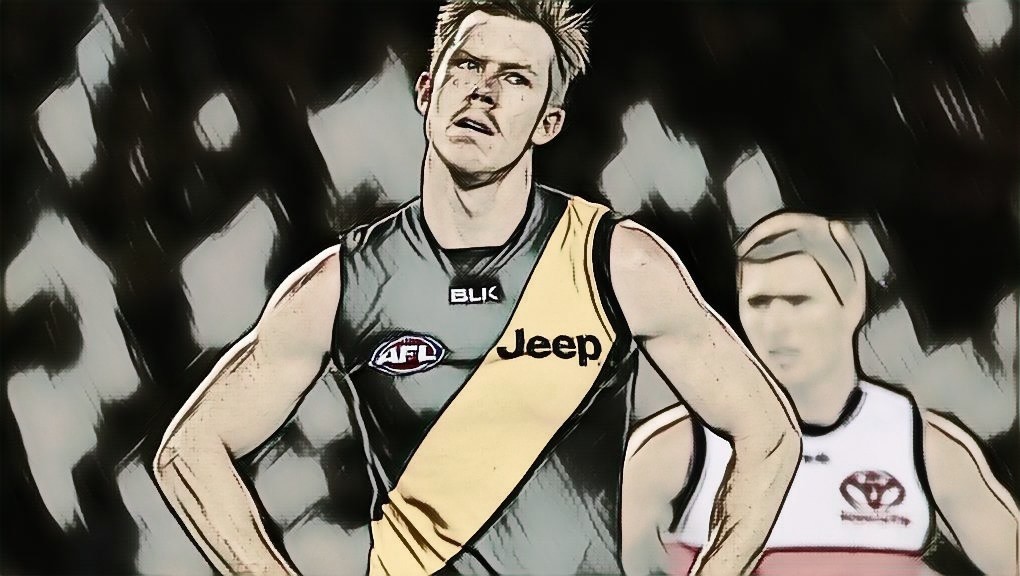 It’s funny what a bit of maturity can do.

The Jack Riewoldt we saw crash to the ground awkwardly after the high contact from Jake Carlisle in the opening moments of the Tigers’ victory over the Saints this season, did not remonstrate with the trainers. He did not yell and scream at the doctors attempting to aid him. Nor did he crawl up the race, peering out into the field of play like a man trying to regain his position by stealth. He understood, even in a concussed state, that the team was bigger than him, and the team could prevail, with him or without him.

And prevail they did. The Tigers cruised home by 28 points with their forward structure making the necessary adjustments. Josh Caddy stepped in as the focal point, and finished with a career-high six goals. Dan Butler chipped in with three of his own as the Tigers kicked five last quarter goals to three to seal it.

The 2011 version of Jack Riewoldt may have felt threatened by the performance of his replacements. Could these younger players be eyeing his spot as the number one forward? Would the team not rush him back in if he came up OK from the concussion tests? Would his teammates start looking for these guys as the preferred options as they streamed through the centre? Was he not as integral to the Tigers’ success as he thought he was?

For context, the way Riewoldt conducted himself in 2011 reminds me of the way James Sicily conducted himself earlier this season. There is a fair bit of “me” to Sicily’s game, though the talent is undeniable. That was the way with Riewoldt as well. He had all the tools, but he was worried about his own position and his own game.

The 2018 version of Jack Riewoldt isn’t too concerned about any of that. If missing the rest of the game after a head knock provides the opportunity for the young stars to shine, he’ll accept it. Sure, he’d prefer to play, but premierships are not won in June. They can be lost, but never won, and he sat on the bench and watched as his teammates took care of the business at hand against the Saints.

All for the betterment of the team. If you think he hasn’t become the ultimate team man, well… you don’t know Jack.

We’ve written before about the Tigers as a unit; how they seem to have found the secret to functioning as a true team, and how that knowledge breeds success. It’s all about sacrifice, and none on the Richmond outfit have sacrificed their game as much as Jack Riewoldt in the last couple of seasons.

When Riewoldt commenced his AFL career in 2007, centurion goal kickers were not yet ancient history. Fraser Gehrig hit the ton just a few years earlier, and Lance Franklin would become Mr. Three Figures himself in 2008. Many thought Riewoldt had the potential to top 100 goals in a season as well. The man, himself probably thought he had a legitimate shot at it, too. He had 78 goals in 2010 and won the first of two Coleman Medals,  but despite his goal kicking heroics, the Tigers were nowhere near a flag. They finished 15th that year and didn’t even make finals until 2013, when they were bundled out in the first week by Carlton. Port Adelaide sent them packing in similar fashion in 2014 and North Melbourne did the same in 2015. Three finals campaigns had resulted in no wins.

2016 saw the Tigers fall down the ladder, crashing to 13th spot. Calls for the head of coach, Damien Hardwick started to grow louder. Rival tickets starting making noise about taking over the club and ousting the current administration, but the Tigers rallied around each other, and what we saw over the last month of the 2017 season made the sacrifices of the players, coaches and staff all worthwhile. A series of emphatic finals wins over Geelong, Greater Western Sydney and finally, Adelaide saw the Tigers hold aloft the premiership cup, ending the 37 year drought.

And there, making a cheeky sign in the team photo, just as he’d done years before in the juniors, was Jack Riewoldt. If you’ve seen that photo, he owes you a punch in the arm, by the way. It’s close to being made law.

During the weekend just past, we saw the new Jack Riewoldt in full flight. He wasn’t out there kicking bags of goals, or flying for high marks he had no chance of gloving. Oh, he was involved in plenty of contests, but they were contests for the sake of others. He was not there to compete and win, individually. He was there to compete and make sure the team won. The new Jack Riewoldt was summed up best in two passages of play.

The first came in a marking contest where the best any player could’ve hoped for was to bring the footy to ground and halve the contest. Riewoldt leaped, with Rhys Stanley and Mark Blicavs to beat, and with one hand, managed to palm the ball to the waiting hands of Reece Conca. He was able to give the ball off to Nankervis, who barrelled it long, and Dan Butler was able to score as a result.

I am not even sure whether Jack’s action in the marking contest counts as a score involvement. It sure as hell doesn’t count as a goal assist. What it should count as is a new stat all together – goal creation. Anything could’ve happened in that marking contest, with the least likely scenario being Riewoldt marking it. He did one better, and created opportunity for his teammate in a fashion not many would’ve thought of, let alone be able to successfully execute.

The next one was part of the soon-to-be-famous Rioli run.

The run and perseverance of Daniel Rioli was remarkable, but it all would’ve been for nought had it not been for the quick hands, quick thinking, and complete unselfishness of Riewoldt. As Rioli went off the ground after chasing the ball down on the wing, Riewoldt was presented with two options at half forward. He could take the ball in his hands and try to shake his man – he is a full forward, and none would’ve blamed him had to tried this. OR…he could forsake his chance to take possession, forsake his opportunity to pad his stats with a handball or kick, and tap it to the advantage of the still-chasing Rioli.

He opted for the second, and though Mitch Duncan got to the ball first, Rioli closed, laid a tackle and won a free kick for holding the ball. Though the kick at goal was a fundamental kick, it was the work before it that made it special. It was the little things.

Both actions by Riewoldt were premiership football played by a man who not only thinks quickly but believes completely in his teammates’ ability, desire and capacity to make things happen.

Would 2011 Jack Riewoldt have been more likely to make a play for his teammate, or would he have taken the game on himself? What would James Sicily do right now?

Make no mistake, there is still some rogue in Jack Riewoldt. For the sake of this site, let’s say there’s a bit of Mongrel in him. He is the man who took the stage with The Killers following his team’s Grand Final triumph. He is the man who sits at the desk during AFL 360 every Tuesday evening and, despite the presence of a three-time premiership player opposite him, dominates the conversation. But as a footballer it is no longer all about Jack.

In 2017, they added up to hand the Tigers a premiership. In 2018, Riewoldt looks determined that the little things will indeed produce bigger and better things again.

And when they do, he will share the success with his teammates again, because that’s what the 2018 version of Jack Riewoldt does.

Like what you’re getting from The Mongrel? We’d love you to give us a Like on Facebook or a Follow on Twitter if you can spare the couple of seconds to do it. I mean… we know you’re busy and all, but geez… it’s a nice thing to do considering we do this stuff for free and we’re nice blokes and who do you think you are anyway? Why, I oughta just punch you right in the clavicle…