Have Richmond unlocked The Secret?

He won 11 championships in 13 years, all whilst playing against the most dominant player the game has ever seen – Wilt Chamberlain.

Whilst many will scoff at the claim of Russell as the ‘greatest’, it’s hard to argue against the team success. Isn’t that what everyone plays for? To win championships?

What’s more impressive about Russell is the values that drove his success.

Russell was a beast; an athletic freak that would outsprint those smaller than him and outleap those as big. He could’ve chased individual accolades and looked to score more had he wished to. He played on an excellent team, with excellent teammates, and it was more often than not the performance of those teammates, facilitated by Russell’s unselfishness, that propelled them to victory.

Bill Russell knew the secret to winning. It was about the team – always about the team, and within that team he played a role. They all did – all pieces of a precision machine. Individual accolades will always pale in comparison to team success. Wilt Chamberlain would be fondly remembered for his offensive feats, and many of the records he set still stand today, but he failed more than he succeeded when he came up against Russell. Their rivalry is one of the greatest in sports, but there was a clear cut winner. Wilt may have been the better player, but Russell had his priorities right. Wilt scored more, rebounded more and blocked more shots, but Russell won more, and that’s why he is recognised as the greatest winner in NBA history. 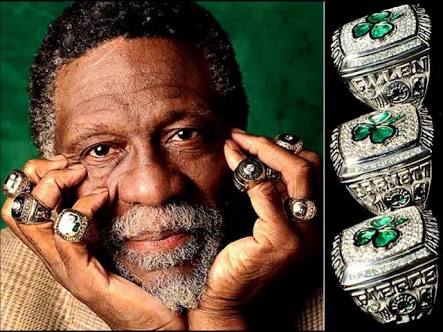 US Sportswriter, Bill Simmons called it ‘The Secret’, but that’s a little too “Oprah” for my liking. As an example, Simmons cited the Detroit Pistons trading away the high-scoring Adrian Dantley for a role-player named Mark Agguire. Dantley was a star in the league, and knew how to put the ball in the basket. He was a scorer, and was excellent at it, but he was not the player the Pistons needed. They had players who could score – they needed someone to play a different role. It was only after Agguire came on board that the Pistons were able to gel as a team win the title.

Too often, those Pistons are conveniently forgotten by NBA fans. They were THE team in between the Celtics/Lakers rivalry and the emergence of the Chicago Bulls.

It’s a secret that isn’t so much of a secret to those at Richmond. Everyone there seems to  know it.

Watching the Tigers apply relentless pressure to the opposition, running in waves and sacrificing for each other, you have to wonder whether the Tigers, as a whole, have unlocked the secret at an AFL level?

The moment before the 2017 AFL Grand Final that sticks out in the memory. As the national anthem played in the background, and the teams lined up across from each other, the Adelaide Crows stood with their arms by their side, still, intense, and looking like a team with a purpose. It was meant to display their power, their size, their focus. It was a tactic designed to intimidate.  It turned out to be a fierce mask on the face of timid competitors.

Across from them stood Richmond. There was no “power stance”, no formation other than the line they were instructed to stand on. The thing they did different, and the thing they had uniting them was their joy at being there on Grand Final day. They smiled. They enjoyed it. They had earned the right to be there. They had nothing to prove to anyone but themselves. They belonged.

The experts have started trying to pull apart Richmond’s game style in recent weeks. They’ve spoken about the relentless pressure, and the defensive structures. They’ve talked about the reliability and durability of the Richmond players – and the Tigers’ record of keeping their best players on the park is second to none. They’ve discussed the coaching of Damien Hardwick and the determination of their leaders; the unmitigated brilliance of Dustin Martin, the desperation of Trent Cotchin, the ability to read the play of Alex Rance, and the resolute and often unsung defence of Dylan Grimes.

But it’s the secret that drives the Tigers’ success, and it’s that same secret that has seen every player buy into a system that saw the Tigers hold aloft the premiership cup. They are the most selfless team in the competition. They play for each other – they play for their mates.

Jack Riewoldt is the poster child for the era of Richmond selflessness. The pouting, gesturing, complaining Jack Riewoldt is a thing of the past, a not-so pleasant memory of Tigers-past. His Coleman medal years of 2010 and 2012 reaped goal hauls of 78 and 65 goals respectively, but it also came accompanied by a petulant attitude that seemed to blame his teammates for poor delivery, or the game plan for lack of supply.

The Richmond spearhead was faced with a decision – change his game and subscribe to the Damien Hardwick way, or continue being the player he was, and remain part of a mediocre team.

It’s quite amazing to witness the results of a leader buying in to a team-first approach. You can easily imagine a player with the stature of Jack Riewoldt walking out of a meeting with Damien Hardwick and bristling at the thought of being asked to sacrifice a part of his game – the role he was recruited for and best known for. It’s not too difficult to imagine teammates siding with the charismatic Riewoldt as he railed against the proposed direction of Hardwick. He was a two-time Coleman medallist. He already knew his role – those medals were proof of that.

But Riewoldt didn’t rail against the system. He embraced it, and the system embraced him in return.

Surrounded by a fleet of small forwards, Riewoldt remains the focal point of the potent Richmond offence, but channelling his inner Bill Russell, he has realised that it doesn’t matter if he doesn’t clunk a big mark if Jason Castagna gets the crumbs and snaps a goal. It doesn’t matter if his lead is ignored if Josh Caddy has snuck over the back (his specialty) and gets an easy one in the goal square.

It doesn’t matter if he doesn’t kick a goal, as long as the Richmond Footy Club do.

Riewoldt has grown and matured in his role at Richmond. Sure, he still loves a goal, but he has now tasted team success, and nothing tastes sweeter.

The thing about leaders buying into a system is that it becomes infectious, and once that happens, anyone new coming into the club is automatically infected. At the professional level, it’s all they know.

Against Collingwood, Dan Butler picked up the loose ball on the boundary around 35 metres out from goal. He was within range, and someone not well-drilled in the team-first mantra may have been forgiven for having a ping at goal around his body. Not once did his head tirn to look at the goals. Not for a second did his eyes focus on the big sticks.

Butler looked inside, found nothing, and looked again until he did. The chain of possession commencing with Butler on the boundary ended with a mark to Jayden Short just on the 50 metre line, directly in front. His set shot sailed through for a goal, and the team celebrated together.

The week before against the Demons, it was Brandon Ellis’ turn to show just how committed to the cause he was. With seconds remaining, and the game well in hand, James Harmes grabbed the ball on the wing and looked to give off a handball. He never got the chance to execute it. Ellis chased from half back, but seemingly came out of nowhere to nail him in a tackle and earn the free kick. The game was over, in the minds of all except the Richmond players. They rallied around Ellis as he was awarded the free kick. The tackle wasn’t just one tackle – it embodied their play, and who they were. No easy possessions. No half-efforts. No matter how long is left in the game.

We saw Collingwood emulate the style of the Tigers, only to inevitably fall to them. It was like the master teaching the apprentice a lesson. We’ve seen the precise Hawks unravel as a result of the relentless Richmond pressure and their desire to play for each other, and we’ve seen the Tigers grow in confidence. They’ve always had the tools – now they have the belief.

When watching Richmond play, you don’t see a team with stars aside from the big four. Martin, Reiwoldt, Cotchin and Rance are their standouts, but even with outstanding players, it is the team that comes first. Those players fit within the structure – the structure does not change to accommodate them.

So often fragmented over the years, with splinter groups and challenges to the board in the news as often as Richmond wins, the Tigers are now whole. The sleeping giant isn’t just waking, it’s rampaging, and no one is looking like stopping it.

Isiah Thomas may have really been onto something. Basketball may not really be about basketball, and football, as silly as it seems, might not just be about football after all. It’s about people; the right people who love the game, love their club and love their teammates.

Those Detroit Pistons went on to win back-to-back NBA titles, dispensing of the Michael Jordan-led Bulls along the way – an ominous warning to the rest of the competition, and something to make Tiger fans smile all the wider. As long as the team comes first, so too will the Richmond Football Club.

Back-to-back is well and truly in play.