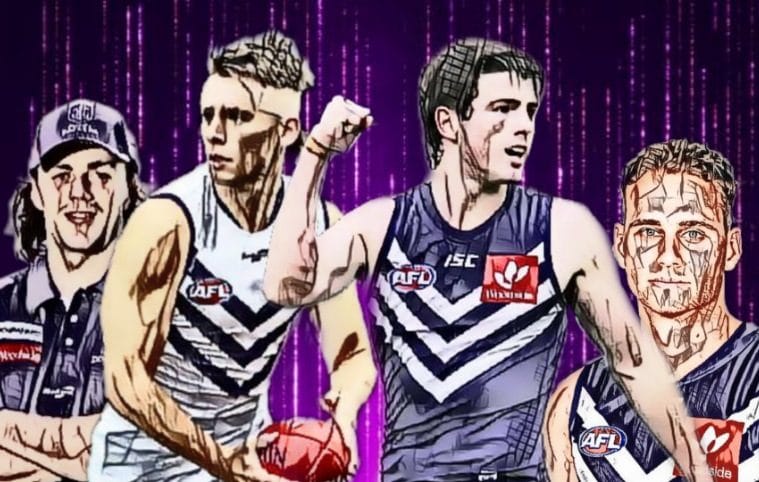 The Alex Docherty Column – Fremantle Win The Trade Period. Now For The Draft

Predictions are a dangerous game in any aspect of life and in football this is no exception.

How does one go about making such things? What elements do you take into consideration when you make predictions for the year that’s about to happen or what a club will do with its first selection in a Draft?

For everything they cop on social media, I’d love to know what sort of process the likes of Kane Cornes and Matthew Lloyd go through when they make predictions. Mark Robinson too. There’s got to be more to it than a bottle of Captain Morgan’s – I could do that.

But above all else, the beauty of predictions is that it’s fun to reflect and look at the ones you got right with admiration and then the ones you’ve got horribly wrong that all you can do is just laugh and call yourself a moron before everyone else does.

When we were sitting in the studios of Swinburne University at the start of the year, we were discussing our ladder predictions live for the A3 Footy Podcast on the eve of the season.

My co-host, Alex Catalano said that the Tigers would still make finals but slide out of the top four. The only thing our friend, Alex Miller and I could do was scoff and start to take the piss out of the prediction. Turns out he was closer to the mark than the both of us.

Conversely, I predicted that Melbourne would not make the finals and that would’ve spelt the untimely demise of Simon Goodwin as head coach of the Dees. The ultimate egg on the face was watching them completely obliterate my Western Bulldogs in the Grand Final in the span of 90 seconds.

In fairness, I did say in the same line that this Melbourne team was too good to be in the middle of the road, so I do deserve a smidgen of credit for that. Nonetheless, it was still a bad call, one that I’ll gladly take on the chin.

So, the following prediction, although whilst it’s ungodly early, I have thought about it meticulously in the spare time I haven’t been doing university assignments (best part of the year this is if you’re still a student) and I’m prepared to share it and try to explain as best as I can.

Fremantle will make the top eight next year on the back of this off-season. Hold me to it, I dare you.

They have nailed this trade period by adding a few critical pieces to their puzzle with the acquisitions of both Will Brodie and Jordan Clark and in addition, are going to walk into this month’s draft with three selections inside the top 20 before the father/son selections kick into gear.

Carlton are a big winner too, there’s no doubt about that, but in comparison to Fremantle, Carlton’s draft capital is not even close to what Fremantle will walk into the draft with.

That’s a big win if you ask me, yet I’m perplexed to see other like-minded analysts and writers give them mid-tier grade for their trade period. For what?

I do agree that it is a small blow to see Adam Cerra leave for Carlton. It opens up a gap in terms of how the midfield use the ball going inside 50, the return was basically pick six and the top end of this draft is littered with players that will play crucial roles for their respective teams in the future.

I will also say that there will not be a better opportunity for Jordan Clark to showcase his wares and prove to the football world that not just he belongs in the AFL, but he will be the gun talent many prophesised about him when the Cats took him in the first round of the 2018 AFL Draft.

For many, it was seen as a brilliant get. Many draft analysts, experts had predicted that Clark was well inside that top 10 and if he wasn’t, then he was the 11th highest ranked prospect.

What I liked about Clark in his draft year was his ability to read the play across half back and his speed when he had the ball in hands to drive it out of defence.

At a team like Geelong, it always felt as if it was going to work against him. One, the team was basically in that window of premiership contention, so the older boys were always going to be the priority and secondly if he was to get games, he’d have to adapt to other positions, something that has ultimately kept him out of the team as he has struggled.

I can sense that there’ll be discussions about where he’ll be played in 2022 and if the Dockers want outsiders to know that they’re going to be serious about challenging for finals, then they need him in his best position and that’s on the half-back line. There, he can play a key piece in a zone defence and be permitted to run and create.

Conversely, I wouldn’t mind seeing him push up further afield on the wing if they’re still undecided on a running mate for James Aish/Blake Acres. The wing position has become quite a pivotal piece to help move the ball from end to end and I reckon a spot on the wing would be quite beneficial with Clark’s running capacity and kicking abilities.

I see Brodie more as a long-term prospect, but just as easily, I think he can be in Fremantle’s round one team next year if he has a healthy pre-season.

If we were to base next year’s midfield on this year, David Mundy is the cornerstone of the Dockers’ midfield and honestly, I can’t tell you how he does it at 64 years young and I’m sure the Beatles certainly couldn’t either. His disposal numbers of 25 disposals per game are the highest since 2015 when the Dockers were last challenging for the flag and that’s wild to think about.

But aside from that, you’ve got some young lads in there in Andrew Brayshaw, who delivered a coming-of-age season this year, averaging career-highs across the board, and Caleb Serong, who has shown in just two seasons already just how important his offensive and defensive work are going to be.

The addition of Brodie only just bolsters this young brigade of bullocking, but also exciting midfielders that will shoulder the workload across the next decade.

What about Fyfe? I’m sure I hear you asking and if you didn’t, well tough luck.

Even though his accuracy in front of goal this year is about on par as watching Stevie Wonder try to win the World Darts Championship and absolutely ruining your multi, I still believe the idea of him playing more forward than midfield has got some serious legs.

Yes, kicking 6.21 this year is unflattering in every sense imaginable and it’s true that his two Brownlow Medal wins were on the back enormous work rate and impact when the ball is there to be won in the middle of the ground. By the time round one comes around next year, he’ll be 30 and entering his 12th year in the league. His talent is undeniable and anyone who says otherwise is nothing but a fool, but there already looks as though there’s a changing of the guard in Fremantle’s engine room, It seems to be Brayshaw’s midfield, but that’s not to say that Fyfe should be prevented from playing in the middle; that would be ludicrous.

However, the way he has attacked the ball in the air so often has been so remarkable over the years, having him present as an option up forward would help ease a lot of pressure off of the guys such as Matt Taberner, Josh Treacy and even Rory Lobb when he gets games next year… I don’t want him to play, but he will – it’s one for another time.

Whilst it’s good to see Justin Longmuir turn this Fremantle team around, there are a couple of issues around their game, and I’d have their scoring at the top of the list.

Whilst the Dockers were basically in the hunt for Finals up until the last game of the season this year, they were 16th in the competition for goals scored and 15th for scoring in general and even if they’d made it, there would’ve been no chance they would’ve got past the first week.

It’s a worrying trend that Longmuir must break or at least begin to see improvement in next year if the Dockers are to break through for their first finals campaign since 2015.

Taberner kicked 37 goals in 16 games this year, yet he’s still criminally underrated by many. Lachie Schultz had a good year too, kicking 22 goals from 20 games, but the output begins to dry up a little from there.

Michael Walters had a very poor year. It almost feels like a lifetime ago he was All-Australian. Liam Henry played 17 games this year and showed flashes of brilliance from time to time, but he must find another gear over the next pre-season, as must Treacy – judging on their form this year, both are likely lads.

The next part they must nail is the draft and with picks six, eight and 19 on hand, this is one draft they cannot afford to stuff up. Fortunately, there’s an abundance of talent inside that first 20-25 players and quite a few of them from Western Australia, you’d have to fall over to stuff it up. There’s a handful of top WA prospects that they could look at.

I’d be shocked if they overlooked Neil Erasmus with one of those first two picks. A couple of glances of his games at Subiaco this year in the WAFL suggests that him at Fremantle fits like a glove, with his ability to win a lot of the footy and his tidy use of the ball could help solve that problem of the forward half that is cruelled by disconnect and disarray.

A tall forward such as Jye Amiss would be a great shout as an early selection, as I doubt very highly that he’d slide towards Fremantle’s next pick at 19 – Rhett Bazzo or Jacob Van Rooyen sound like they’d be handy additions here.

If they get no bids for Next Generation Academy prospect Jesse Motlop either in the first round, then they can practically accept a bid for him with what’s left of their picks, and they’ll walk into the pre-season next year with that little extra excitement.

The Dockers are already a respectable contested team, 7th in the league for total clearances and 9th in the competition for contested possessions, so I reckon they’ve got good bit of the game covered. If they can brush up their polish before round one, then the sky’s the limit for this team.

Injuries aside, why can’t they contend for a top eight spot next year?