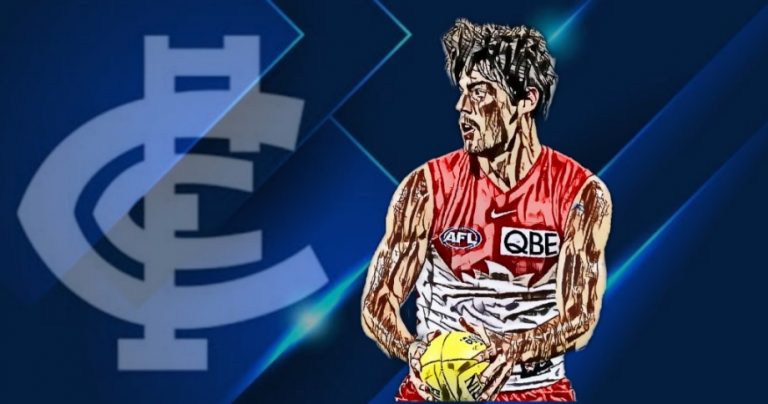 Getting One Right – George Hewett To Carlton

Whilst there will be bigger names on the move and more high-profile players looking to relocate this off-season, the Carlton Football Club has pulled off a true coup with the signing for former Sydney Swan, George Hewett.

If you haven’t familiarised yourself with Hewett’s game over the past few years, you could be forgiven. His 2020 was all but destroyed by a back injury, and he is not the sort to dominate a game, but his bookends to the 2020 campaign speak of a young man ready to blossom as an inside midfielder.

The Swans have been hit hard in terms of departures, with Jordan Dawson joining Hewett in exiting the rapidly improving Sydney team in moves that will slow their ascension. Their collective development in 2021 was a large part of the Swans’ surge up the ladder to the point where they looked as though they could contend for a top-four spot. They know what they had in Hewett… and they’re painfully aware of what Carlton is inheriting.

At 25 years of age, Hewett is now in his peak years. The Swans did the hard yards, persevering with him as he found his feet as an inside mid with defensive capabilities, only to see him head to the Blues. They will reap the rewards of that good work.

So, what does Hewett add to this Carlton side?

Before we explore that, it is prudent to look at what the Blues have targeted in the years prior. Despite harping on about assistance for Patrick Cripps in the clinches, the additions of Adam Saad, Jack Martin, Mitch McGovern, and Zac Williams have failed to address this. Even the acquisition of Williams, who was recruited to play midfield, backfired spectacularly when the former Giant showed up to the club in less than ideal shape, and his lack of defensive run (as he paused to catch his breath, usually) saw Carlton exposed on the rebound way too often.

Within a couple of months, Williams was redeployed to the position he played for GWS – the half back flank, despite the fact the Blues had so many options in that role that their co-captain, Sam Docherty, had to be moved to the wing to fit them all in. For the record, 2022 is the test for Williams, and he could end up being just the midfield spark the Blues need. However, it all comes down to fitness, and he has only been at the acceptable level for a midfielder once in the last four years.

Of the others, Saad has shown a bit, whilst Martin has been all downhill since a spectacular first outing for the club, and McGovern has… well, to put it bluntly, he has flat out sucked.

In recruiting Hewett, the Blues may have just got it right for 2022.

Ed Curnow is not far off turning 32, and whilst his ability to play the role of two-way midfielder is still valued by the Blues, it is becoming apparent that his AFL career is in its twilight. Hewett provides the perfect solution to this issue, able to win his own footy, work on the spread, or lockdown on an opponent when the situation demands it. He may not be the aerobic beast that Curnow has been over the journey, but Hewett offers the two-way run that is so valuable in the modern game, and let’s be honest, the Blues need that in the middle to cover for the lack of defensive work from Cripps.

If Carlton, as expected, adds Adam Cerra to their midfield ranks, a set-up featuring Sam Walsh, Adam Cerra, George Hewett, and a fit pairing of Patrick Cripps and Zac Williams looks equipped to take on the best combinations in the league…

I am sure that there will be some who screw their nose up when the subject of Hewett aiding the change at Carlton is broached – rest assured, those people wouldn’t know if their arses were on fire even if they saw the smoke. Hewett is the kind of player that acts as the glue in the midfield – he plays the type of role that binds a group together and fills whatever gaps are necessary. You could be fooled into looking at his stats – just under 18 touches per game and two and a half tackles per outing last season – but you’d be selling both Hewett, and your own analytical skills short in doing so. Hewett, in the role he has played for Sydney, passes the eye test.

If you need verification of this, check out the job he did on Luke Shuey in Round 16 of the 2021 season. Not only did he put the clamps on Shuey, restricting him to 19 touches, but he had 26 of his own and added five clearances. That is a two-way mid going to work!

I have been critical of the Blues over the last few years. Yes, they have tried to buy their way out of trouble and in theory, I understand what they were trying to do. They were trying to get the best available talent, irrespective of need. They understood that in order to do that, you have to pay for it, but sometimes, it is not the flashiest, most expensive car you need to stay in the race.

In George Hewett, the Blues have acquired a dependable, solid vehicle to aid them getting from Point A to Point B with a minimum of fuss. Sure, it won’t be revving its engine at the lights and challenging anyone to a drag race, but when the dust settles, Hewett will still be neck and neck with whoever you give him the job of minding when you pull up to the next set of lights, ready to go again.

With Cripps looking a little shaky in 2021, and Walsh fighting it out all alone in the midfield in some games, this acquisition has the potential to be the best move of the off-season. If Adam Cerra is going to bring a bit of sizzle to the Carlton team in 2022, then George Hewett is providing the steak.

This move may be lost in the shuffle over the next few weeks, particularly if players are forced to move states to dodge mandatory vaccines (hey, it could happen!), but we should all be revisiting this by about Round Ten. I reckon history will smile upon this move.

The Blues have got one right.