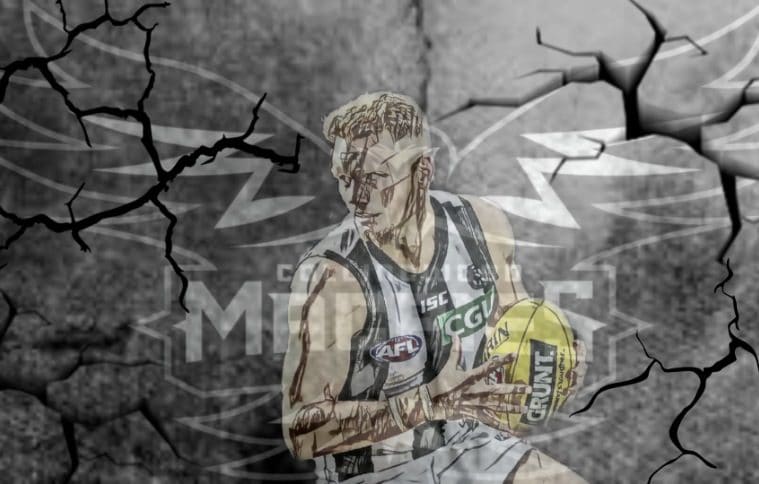 Firstly, apologies for perhaps the worst title of any article in 2020. The opportunity was too good to pass up.

How would you be feeling if you were Adam Treloar right about now? Unwanted and unloved by the team you would have bled for? Let down by the team you thought you were a vital part of? Hurt by those who asked so much of you to get their salary cap right, only to view you as collateral damage in an effort to re-sign others?

You could not begrudge Treloar for feeling slighted at all.

He chose Collingwood over Richmond and as a result of his decision has had to sit back and watch the Tigers cruise to three premierships. He could have been part of that. The club he chose has come close, but not close enough. He’s done the right thing by the team and structured his salary to supposedly create room in the salary cap. People have called it “back-ending” a deal, but with Treloar, it wasn’t supposed to be that way.

On several occasions, Treloar has had the goal posts moved in order to accommodate others either signing extensions or joining the club. The result was supposed to be a premiership. It was all supposed to work out. Perhaps the club was thinking it could use the old chestnut of “players taking less to be part of a winning team” to convince players to stick with the club.

And that plan may have succeeded if it weren’t for those pesky finals losses!

The Pies dropped a see-sawing contest to the Eagles in the 2018 decider, but as they’ve re-tooled, recruited and bolstered their playing stocks along the way, Treloar has found himself waiting for his payday. Whether or not he has been patient is something I do not know, however the 2021 season was meant to be his turn. After doing the right thing by the team to help fit in players like Dayne Beams, Jordan Roughead and the big deals for Brodie Grundy and Darcy Moore, Treloar was due to be paid.

It was the time Collingwood was meant to do the right thing by him.

Only Collingwood decided they didn’t really have to do the right thing. It wants to do something else.

With all the information flying around regarding the situation, the Magpies are coming across like a group of politicians trying to differentiate between what was and wasn’t a core promise after they get elected.

“Yeah, we said we’d pay Adam in the back-end of his deal if he took less to help us out… but that wasn’t a core promise.”

In one of the messiest football breakups in recent history, Treloar is on the outer at the Lexus/Holden/Whatever Centre and will be in new colours in 2021. His issue? Playing to the contract he signed and, apparently, having a partner now working interstate.

You know what they say about those long distance relationships, right? They impact a footballer’s ability to play well. Common knowledge…

That seems to be the Collingwood line on it, anyway.

This may seem like a Treloar-Collingwood issue from the outside looking in, but there are far more issues at play here, and some that could impact the club for a long time yet. For one, what message does this send to any potential recruit at Collingwood? How wary would you have to be in making a deal?

That the Magpies could be shooting themselves in the foot in terms of negotiating other long term deals is something that is being neglected in the current reporting on the matter. Treloar signed the deal he was offered by the Pies. The Magpies are the ones trying to get out of it – Treloar just wants to play footy. What’s to say the Pies won’t weasel their way out of the next long term deal they commit to?

Can you blame them? Weaseling out of things is what separates us from the animals… except the weasel.

What player in their right mind would sign a long term, back-ended deal with Collingwood having seen the way they’re dealing with Treloar at the moment? What player would willingly forego money they were due immediately to help Collingwood sign others with the knowledge that a) the team would not support him when their turn came, and b) they evidently have a distinct lack of awareness around working within a specified salary cap?

Compounding the Treloar situation have been reports from Sam Edmund that the decision to move Treloar on was a result of the leadership group not wanting him around anymore.

Talk about passing the buck!

This is something that would not sit well with any in the leadership group, particularly if the reports hold any water at all. Number one, if this even has a skerrick of truth, it should not have got out! Number two, why would Collingwood allow his teammates to take the wrap?

This report was refuted by Magpie coach, Nathan Buckley on Twitter, who claimed it was “news to him.” Buckley added that “our leaders don’t sit on list management, it’s not their job.”

Other Magpies have been quiet publicly, with only Buckley stating that “We’ll continue to communicate directly and sensitively with Adz and his management,” however it is abundantly clear that as sensitive as Collingwood may attempt to be, the message thus far has been clumsy and insensitive.

That said, it would not at all surprise me to hear that Treloar’s management had manipulated the situation at all to benefit their client and his perception in the public eye.

Undoubtedly, Treloar has been a warrior for the Pies since coming across from GWS. He has totalled 94 of a possible 113 games since he commenced with the club for the 2016 season and knows only one way to play the game – flat out. Whether you like him, dislike him, think he turns the ball over too much or hate his disposal by foot, when you look at players on that Collingwood team, Treloar was one you would consider a “heart and soul” player.

And now the heart isgoing eroded, and his soul is taking a battering as well.

When Treloar laces up the boots against the Pies in 2021, he will be looking to make a statement. Not that he was worth the money Collingwood weren’t willing to pay him, but that he deserved to be treated with respect on his way out. He shook hands with management on this deal. He renegotiated with the club to free up money to sign others, yet he is the one being shown the door when the club had the chance to make things right.

Will this huge error by the Collingwood Football Club and their list management department be the thing that drives a wedge in this Magpie team? Seeing one of their own treated so poorly to make room for others could make players start wondering how it would play out if they were deemed expendable, themselves, at some stage.

I once heard Dermott Brereton state that it only takes a couple of players being five per cent off to make a huge difference to a team On any given day. And it only takes something small to cause a kind of ripple effect throughout the team. I have always held onto that statement as I reckon there is a bit to it.

As the Magpies continue to attempt to find a way to leverage Treloar out of the club, there are ripples aplenty, and how these ripples affect Collingwood players, both current and future, may lead to this becoming one of the moments that decides the direction of the club for quite a while.

Collingwood list manager, Ned Guy is due to appear on Trade Radio on Wednesday morning. What he has to say will either pour water on a fire threatening to get out of control, or tip some petrol on it.

As the AFL trade period concludes, Adam Treloar will be contracted to another team. And amazingly, teams will have approximately a third of his first year’s salary paid by the Pies. He is a bargain buy in a year when others are costing an arm and a leg.

Who gets the benefit of Collingwood’s mistakes? And who is best poised to take advantage?

And how do the Pies settle things down inside the club with the knives out for them externally?

The 2020 trade period will be a big one, but this story may be spoken about long after the final deal is done.