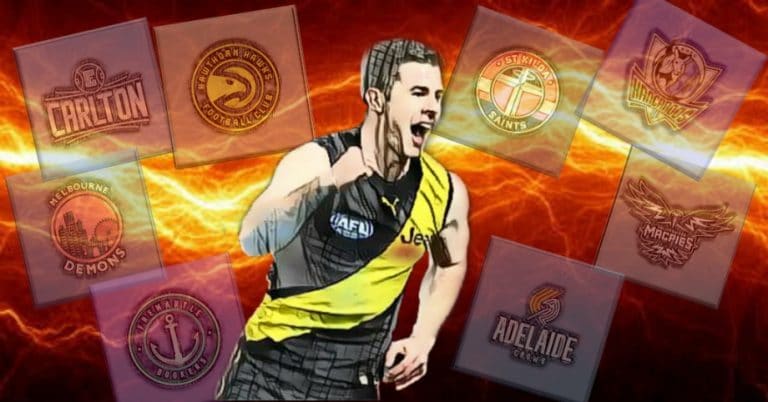 It came as a bit of a shock to learn that Richmond were looking at trading Jack Higgins in the upcoming trade period.

An incredibly popular figure, Higgins has overcome much in his short tenure as an AFL player. From a wonderful first season in yellow and black, Higgins was faced with the possibility that his career may have been over at just 20 years of age. This, for a young man who dropped out of school to focus solely on making it as a footballer, would have been a devastating blow.

After brain surgery, and sporting a nice scar along the side of his melon, Higgins returned to the Tigers line up in 2020 to play ten games, and though he looked as though he was working his way back into form, it was clear that the young man who endeared himself to the footballing world had some work to do in order to get back to where he was.

Do we consider Higgins lucky, or unlucky as he sits on the trading block, awaiting the next chapter of his AFL life?

He is lucky in the respect that he is still able to do what he loves and will continue his career with another AFL team. However, given his role in the team, to walk away from Richmond with no premiership medallion seems unfair. Robbed of his chance at a flag over the past two seasons, the fire in the belly would be burning fiercely. What does the future hold for Higgins? And where will he ply his trade in 2021?

I’m not big on predictions. Let’s face it – I get a lot of them wrong, but coming into the 2019 season, I felt that Higgins was capable of taking his game to the next level. There are athletes and there are footballers – Higgins is a footballer, through and through. He is instinctive, quick-thinking with the ball in hand and gets to the right spots often.

Despite his goal average dipping to just half a goal per game this season, one metric I use to assess small forwards is the number of times they touch the footy. Yeah, I know, it’s a pretty simple metric, but it factors in with a heap of others to assess their danger in a game. The more a small forward touches it, the more impact they have. In 2020, Higgins averaged 14.5 touches per game, with his six-disposals in an injury-affected Round Ten win against the Lions dragging it down. He was still dangerous, still lively, and still on the improve after sitting out for so long.

And that is what makes his departure from Punt Road so sad.

After the type of injury and subsequent surgery Higgins endured, 2020 was always going to be about getting his career back on track. To expect him to come in and pick up where he left off might have been a bit of a pipe dream. He was like an insurance policy up forward that the Tigers can no longer afford to pay the monthly instalments on.

Given Richmond’s position at the top of the tree, as so often happens, people get squeezed out.

We’ve heard the rumours that Nathan Broad may be forced to look elsewhere to get the kind of deal he deserves at this stage of his career, and whether the Tigers can afford to keep Marlion Pickett remains to be seen, with the possibility of a better deal in the offing elsewhere.

But with the 21-year-old Higgins walking from the club, you cannot help but get the feeling that the Tigers may come to rue this decision. It is a decision that had to be made, and it is obviously best for all involved, but it may end up being one that comes back to haunt them.

The Tigers have Daniel Rioli and Jason Castagna as their pressure forwards, with Kane Lambert sneaking up there to get involved as well. They’re well-resourced in that department, and Jake Aarts’ emergence this season gave them plenty of room to move in terms of options. Sadly for Higgins, that moving involves him to another club.

Richmond already offloaded a small forward deemed expendable after the 2019 season – Dan Butler moved to St Kilda and had a career-best season in the process. Could we expect something similar from Higgins at his new home? And where will that be?

There are plenty of teams crying out for a high-quality small forward to bolster their attack. Let’s run though a few of them.

A dysfunctional forward line operating under the pressure of a poor-kicking midfield sees Kysaiah Pickett as the big hope to add some zip around the packs. Higgins is a walk-up start to a forward set-up that will most likely be without Tom McDonald, but could contain Ben Brown, Jake Melksham and Sam Weideman in 2021.

North are desperate for a high-quality small forward after using a combination of Jack Mahony and Bailey Scott to fill the role this season, resulting in just 11 goals between them. With Kayne Turner missing for the entire 2020 season, North lacked zip. Injuries to Tarryn Thomas (three goals) and Curtis Taylor (five goals) hurt them greatly, and given the age profile of their forward set up going forward, Higgins could slot right in with Larkey, Zurhaar, Thomas and Taylor to provide a formidable combination.

No Paul Puopolo opens the door for another small forward in brown and gold. Higgins would make the perfect complement to a forward set up including Jack Gunston and Luke Breust, offering a solid pressure component to the Hawks inside 50.

You guys know I am a Hawks man – I will be pretty annoyed if we do not at least ask the question.

Eddie Betts is not getting any younger, and despite the Blues holding onto him for another year, he had more downs than ups in 2020. The addition of a dynamo like Higgins would give them the scoring punch at ground level they’ve been missing.

Already possessing the last Richmond outcast to make good, Dan Butler, the Saints adding Higgins to the mix would release Jade Gresham into the midfield full time – personally, I prefer him as a forward. A lot will depend on whether Jack Lonie finds another home, but at least the Saints will be replenishing their ‘Jack’ component if they pick him up.

The Dogs suffered at ground level inside 50 in 2020 with no true small forward hitting the scoreboard. Yes, Mitch Wallis was fantastic, but he was basically playing undersized key position at times. With Cody Weightman developing and Laith Vandermeer perhaps better suited to the wing, Higgins would slot in as the number small forward at the Kennel without too much drama.

With Lachie Schultz rumoured to be exploring options, having Jack Higgins at the feet of Matt Taberner and Rory Lobb could free Michael Walters up to spend more time in the midfield. Freo’s up and coming midfield – Serong, Brayshaw and Cerra – are all in the same age bracket and if they stay together, will be a force. A small forward like Higgins could feast on the footy that Tabs and Lobb bring to ground.

A rebuilding list, so Higgins is in the perfect age range to work into their plans. With Shane McAdam, Lachie Murphy and Tyson Stengle their three small options inside 50, I could see Higgins quickly ascending to the role of number one small forward at the club.

Would contend for a spot with Josh Thomas, Jamie Elliott and Jaidyn Stephenson, which could be problematic for the Pies. They have a habit of sneaking in and plucking players out, but I do not think a move to the Lexus/Holden/Whatever it’s called centre would be of benefit to Higgins at this point.

With so many clubs in need of the services of Higgins, Richmond may be making a smart short-term move. We’ve seen what Higgins is capable of. He can do the hard stuff and back it up with the spectacular stuff. He works hard and has managed, when fit, to hold his place in the best team in the land.

Whilst it is being reported that St Kilda are the front-runners to sign him, the other teams listed would be neglectful in not asking the question of Higgins’ management. Again, I am not big on making predictions, but health permitting, this bloke could be an All-Australian by 2022 – his ceiling is high.

Who snags Jack in 2021? Whoever ends up with him may just get the best pick-up this off-season.

And maybe a ripping half time rev up or two along the way.