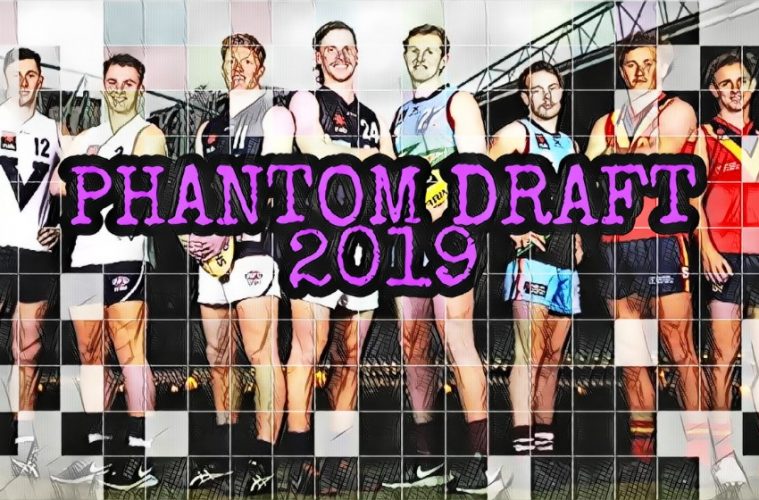 The futures and fates of hundreds of young and hopeful footballers will be shaped over the next few days of AFL Draft action starting with tomorrow’s first round selections.

The AFL Draft has been such a crucial factor in the construction of premiership teams and football dynasties, some of the players picked in the coming days will become club captains, All-Australians and premiership heroes over the course of the next decade or so. The problem is we don’t yet know who.

The various phantom drafts have become a staple of the draft itself, especially with the implementation of live trading on draft night. Now it has never been more necessary for clubs to be aware of who is going where and when, and whether they can strike a trade to select their future star. Clubs have become more reluctant to share information about their potential picks but contrastingly have been more desperate to obtain information from others. Right now, clubs are fine-tuning their own draft predications as their accuracy can form the basis of trades and ultimately who they select. They would want to be on the money.

So, we are getting in on the act again this year predicting how we think the draft picks will fall. It’s not a reflection of our opinion of which club should pick who – but who we think clubs will pick.

Any potential live trades have not been considered, as even Nostradamus would struggle with that, but bids for father-sons and academy prospects certainly have been included. So, before you ask – yes, that is why some picks have changed.

Matt Rowell has been lumped together with his school mate, Oakley Chargers and Vic Metro teammate, best mate – and future Gold Coast Suns teammate – Noah Anderson all throughout the build up to tomorrow’s draft. However, it is worth noting that he is viewed by recruiters as the clear best player in the draft pool and is the deserving standalone Pick 1. One recruiter said publicly that in percentage terms, he is 30 per cent ahead of the next best player in the draft crop. Expect Rowell to be the clear favourite for the 2020 Rising Star.

In a draft that has so much uncertainty with the amount of pick swaps and potential for live trades, there is at least some certainty at the very top of the draft. The negotiations surrounding Gold Coast’s priority pick at the start of the draft were held on the basis that the Suns would select best mates Matt Rowell and Noah Anderson with Picks 1 and 2. Don’t believe the speculation about a potential trade – lock them in.

Luke Jackson is viewed by the Demons as a key forward rather than a ruckman, despite where he has played most of this year. Jackson has been playing in the ruck out of necessity due to the lack of other rucks in the Western Australia U18’s Championship team and his East Fremantle colts’ side. Melbourne believe Jackson could play early next season primarily as a key forward where there is a spot available. Purely as a ruckman, Jackson has been compared to Collingwood star Brodie Grundy. Although, Jackson is more advanced than Grundy at this point in his young career.

GWS were weighing up between two half-back flankers at their newly acquired Pick 4 with Lachie Ash edging out Hayden Young in a decision that is only believed to have been made in the past few days. Ash and Young are both half-back flankers with Young being more an intercepting marking defender compared to the run and speed of Ash, or D-Ash. Hayden Young could now slip deep into the top-10 and potentially further.

Sydney have their eyes on Sam Flanders with their first pick. This is despite, Flanders revealing on radio that his preference is to remain at home in Victoria. Flanders is viewed by the Swans as a replacement for their ageing co-captain and premiership star Josh Kennedy who is obviously closer to the end than the beginning. The Swans are attempting to strengthen their aging midfield with Flanders but having said that, Flanders is also a capable X-factor forward as well.

The Adelaide Crows have slid down the draft order from Pick 4 to Pick 6, agreeing to the pick swap as they believed they would still select the same player at Pick 6 than they would have at Pick 4 (plus they also now have GWS’ 2020 first round pick). Swingman Fischer McAsey is reportedly Adelaide’s target here and is set to become the Crows’ highest ever National Draft selection.

Fremantle are in pole position to nail this year’s draft. The Dockers have two top-10 selections before a bid will come for their Next Generation academy prospect Liam Henry, courtesy of some clever trading. Is Hayden Young too good to refuse at this point? The Dockers could instead opt for local prospect and Larke Medalist Deven Robertson, who they have expressed interest in. But Robertson is more of a contested-ball player and does not provide the outside run coach Justin Longmuir has labelled as a priority.

Barring some live trading (perhaps from an interested Port Adelaide), Dylan Stephens is positioned to still be on the board by Fremantle’s turn. Stephens, an adopted South Australian from country Victoria, has impressed at SANFL league level for Norwood this season and is wanted by the Dockers. He is capable of playing as both an inside and outside midfielder and has shown that for the Redlegs.

This is the pick that will forever be linked to the famous Liam Stocker trade and is tied to Adelaide’s ladder position. Caleb Sarong who has drawn comparisons to Port Adelaide legend Robbie Gray, is one of the options that Carlton are weighing up with their first pick. Carlton have also shown interest in Liam Henry, who will still be without a bid at this point.

GWS had to orchestrate some top-10 trade manoeuvring with the Adelaide Crows to ensure they could select another top-end talent before matching a bid for Tom Green. As a result of GWS’ trade, there is no longer as big a need for clubs to bid on Green. Sydney have ruled out bidding on Tom Green with recruiting manager Kinnear Beatson citing a desire to only call out the name of the player who will be coming to the club. This has caused Green to slide down the draft order and has been the only adjustment since our top 10 predictions released on Saturday. Green is the grandson of Michael Green, who was a four-time premiership player with Richmond during the 1960s and 70s. Unfortunately for the Tigers, there is no grandfather-son rule.

Melbourne missed out on luring Magpie Jamie Elliott to the club during the trade period and have also delisted Jeff Gartlett. Clearly, this is an opening on their list for a small forward and Kossie Pickett is the player who is set to fill the void. The South Australian prospect was originally projected to be a post-30 pickup, but has become this year’s “bolter”. Kossie Pickett is set to join one of the three AFL clubs his uncle Byron Pickett played for.

So much intrigue surrounds Hawthorn’s first selection at clubland and perhaps their choice will largely be determined by what happens before them. Robertson is no certainty to be available at this point, as he is attracting interest from Fremantle. Hawthorn will not have to match a bid for father-son prospect Finn Maginness prior to this selection. Hawthorn could instigate a draft-night trade in their hunt for a second first round pick (that needs to come before the Maginness bid. The Hawks are prepared to trade away their 2020 first round pick to achieve this, but will they secure a buyer?

Will Day is another draftee that has risen up the draft board in recent weeks and is being eyed by the Power with their first selection. That is if he is still available as Hawthorn are interested. Having three first rounders, Port Adelaide are conscious of drafting a nice range of players that are a variety of types. If Day, a lean half-back flanker goes first, Port Adelaide will be on the lookout for talls later on. Specifically, a tall defender may be on their wishlist.

The Western Bulldogs have been at the centre of one of the great pre-draft conspiracy theories, with some rival clubs casting their suspicions over Cody Weightman’s very public tour of the Whitten Oval on Friday. The photos of Weightman at the Whitten Oval were published by the Herald Sun, and were taken by photographer Michael Klein, a noted Bulldogs supporter. Was this a ruse to throw clubs off the scent that the Dogs are actually after Miles Bergman? There is no doubt the Bulldogs would want to keep their interest in Bergman on the quiet. Especially considering Port Adelaide are too interested in Bergman and the Dogs’ pick is sandwiched between two of the Power’s first rounders. Would this an example of some clever pre-draft gamesmanship or should clubs put their tin foiled hats away?

Every draft has some “bolters” which means there has to be some “sliders”, unfortunately for Brodie Kemp he is one of the latter. Although, this was not as a result of lack of form but an ACL sustained in July that meant his draft year was over. Luckily for Kemp, Geelong is set to arrest his slide down the draft boards and could very well secure the bargain of the draft.

The Power are eyeing a tall defender with one of their first-round selection which is slightly ironic considering their decision to trade out Dougal Howard to St Kilda during the trade period. The Power are among the clubs that also include Geelong and Adelaide who are interested in Sam De Koning. Josh Worrell from the Sandringham Dragons is another key defender who they could consider.

The Cats have gone public with their desire to look at key backs with their early picks and Josh Worrell fits the bill. With their later picks, Geelong would love to see midfielder Cooper Stephens reach their early second round selection. However, that is no guarantee as Stephens is among the list of players Richmond are interested in with their first-round pick.

The Dockers have been able to cover all bases by trading up to Pick 8 (that was previously owned by Melbourne) so they do not have to sweat on when a bid for Next Generation Academy prospect Liam Henry comes. Likewise, there is less of a need for clubs to ensure that Fremantle pay full price for Henry, as that price has been drastically reduced as a result of some clever trading with Melbourne, who contemplating bidding when they had Pick 8.

If the Power could secure a half-back flanker, key defender and small forward in the first round that would be a terrific mix of players. However, Cody Weightman under some scenarios is off the board at this point (we certainly know he has met with the Bulldogs!). Port Adelaide have also shown interest in Norwood prospect Cam Taheny of late.