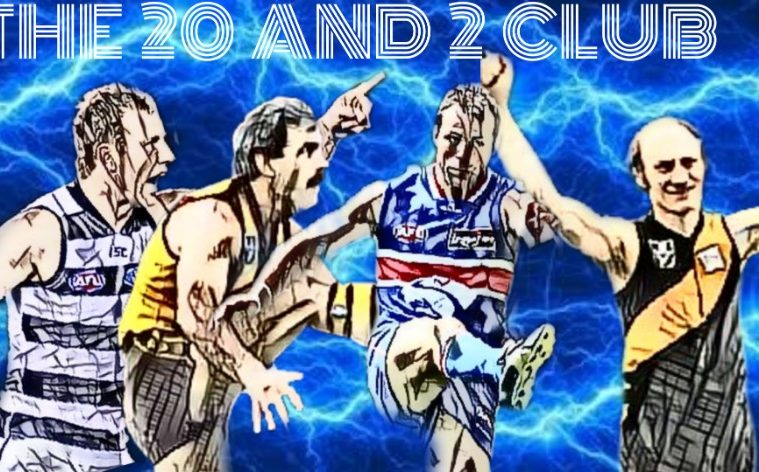 Over the past few months here at The Mongrel Punt, we’ve been putting together little statistical “clubs”.

We’ve had the 30 and 1 Club, which is called home by just eight players who have averaged 30 disposals and one goal per game over a season.

We have the Defensive Double-Double club, which grows each season as part of our weekly Defensive Player of the Year Award. Players must record double figures in one of one-percenters, rebound 50s, or intercepts in the same game to gain admission.

There is the Quadruple Double Club which has only five members in the history of the game. Double figures in kicks, handballs, tackles, and marks in the same game

The 40/20/10 Club for inside mids who pick up 40 touches, 20 contested possessions and ten clearances.

And we have the 30 and 5 Club, highlighting the mids who pick up touches and hit the scoreboard.

That’s a nice collection of clubs. They’re all worth a read when you get the chance. The thing is, when you start compiling stuff like this, you also start piquing the interest of AFL stats royalty, and that’s what has occurred. Straight from the wonderful Useless AFL Stats website, who you can follow for updates on their Facebook page, we welcome Bill Skelton to the fold and with him, he brings a club of his own.

Since 1965 statistics for both disposals and goals have been recorded in the AFL. For a few years I have been tracking players who get 20 or more disposals, and two or more goals per game over the course of a season. Unfortunately, in this time, nobody has. 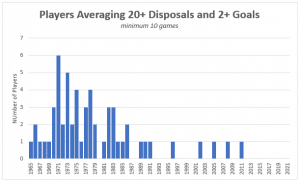 Clearly, this achievement has become less common over time. Forwards have found less of the ball in recent years, as midfielders have kicked less goals. But don’t tell Leigh Matthews it’s a difficult combination to pull off. ‘Lethal’ achieved this combination a whopping seven more seasons ahead of second place.

This century, only four players have received admission to the 20 and 2 Club:

Johnson is a bit of a statistical unicorn in many aspects, also being the only man to ever hit double figures for goal assists in a game.

Four players have averaged 20 and 2for their whole career (since 1965), although two of these are in on a technicality, having only played one game.

In 2016 Nick Riewoldt averaged over 20 disposals per game, but was a single goal short of making the club, kicking 41 goals in 21 games. Nathan Brown in 2008 was also a goal short, kicking 35 goals in 18 games, whilst averaging 20.4 disposals.

Since 2018, only three players have achieved 20+ and 2+, albeit in different seasons. By combining both achievements, they will be able to become the first player since Steve Johnson to go 20&2.

If I had to guess, I’d say Toby Greene feels the most likely.

20 disposals and two goals over a season may sound rather simple, particularly in the age of stats where disposals seem to be manufactured and cultivated by mids who accumulate touches across the ground at will, but the scoring has been a real issue. Dustin Martin, Patrick Dangerfield and Robbie Gray have been examples of modern mid/forwards, but only Gray has ever managed to average two goals per game – just once in 2017, but his disposal averages fell 1.04 per game short.

Likewise, those who hit the scoreboard often were restricted by the area of the ground they play in.