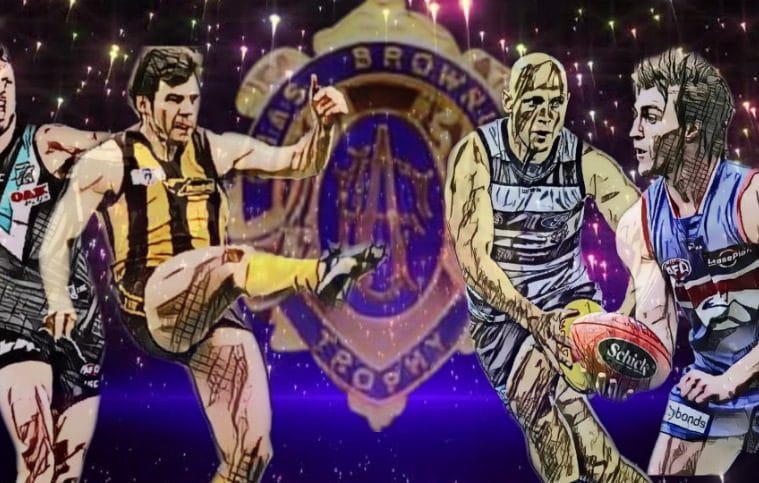 When I think of the Brownlow medal, images of the winners spring to mind. There they stand, on the podium with a glass of champagne, toasted by the football world for their outstanding season. They are the best of the best and are immortalized in that moment. The title ‘Brownlow Medallist’ isn’t something that comes easily.

More recently, it was Lachie Neale marking his place in AFL history by claiming football’s highest individual honour. As Neale awkwardly awarded the medal to himself, Travis Boak raised a glass in honour of the Brisbane champ. The Port star was runner up; the lazy ten votes behind.

Boak was so far back this season that it didn’t really matter. There was no nail-biting finish and no drama as the count neared its conclusion. The rumoursof a Christian Petracca victory proved false as Neale obliterated the competition. It was thoroughly deserved.

Travis Boak is now 32 years old. Whether he has another great season in him at this age, an whether he can contend for the Brownlow again remains to be seen, however, there are a number of men who were much closer to the winner than Boak was this season, and were right in the hunt until those last votes were revealed.  They will never again get the chance to win a Brownlow.

The next time Bruce McAvaney or Hamish McLachlan stands a little too close to the winner, asking him to bare his soul, spare a thought for the guy who, had one or two things gone differently, could have been the one standing up there.

Scott West compiled an amazing career that saw him win a record seven Charles Sutton medals as the best and fairest player at the Western Bulldogs. Twice, he came agonizingly close to adding a Brownlow to that collection as well.

Going into the final round of the 2000 Brownlow count, West shared the lead with Shane Woewodin. The Bulldogs fell to Hawthorn by seventeen points, all but dashing West’s hopes of securing votes. However, while Woewodin’s Demons finished strongly, crushing the West Coast Eagles by seventy points, Woewodin only had seventeen disposals – five below his season average. There were seven other Demons who had more of the ball than him. A tie in the medal count looked likely.

Unfortunately for West, he finished two votes behind Woewodin when the Demon unexpectedly polled two votes to close the count. There must have been something extraordinary somewhere in those seventeen disposals.

Six years later, West finished runner up again, three votes behind Sydney’s Adam Goodes. The Swan put it beyond doubt with a three-vote performance in the final round. West managed just one vote for his thirty-six possession effort. West could’ve easily joined other Bulldog medallists such as Gary Dempsey, Scott Wynd, Brad Hardie and Tony Liberatore. He was a hard, in-and-under player who was the first recorded player to amass four hundred handballs in a season. He sits 18th all-time in Brownlow votes received, and finished in the top four on five separate occasions. Only Joel Selwood, Brent Harvey and Leigh Matthews have more total votes than him without securing a medal of their own.

“There is no shame in coming second in a Brownlow Medal,” West was quoted as saying. Not having a medal of his own does not diminish how good he was, but Scott West; Brownlow Medallist has a very nice ring to it.

Harold Bray is a name you may not even know, but in terms of bad Brownlow luck, he may have had the worst. The St Kilda centre man played from 1941 until 1952, and fell just two votes shy of the Brownlow in 1947, beaten out by Carlton’s Bert Deacon. Two years later, he finished three votes off the pace as the Hawks’ Colin Austen and the Swans’ Ron Clegg both polled twenty three votes. To top it off, in his final year of footy, Bray was again denied the medal by two votes, as the Bombers’ Bill Hutchison, and Richmond’s Roy Wright polled twenty-one votes each.

Only Carji Greaves, winner of the inaugural Brownlow in 1924, has ever matched Bray’s record and finished runner up three times. Greaves does have one win in the count to his name, which may have made the defeats somewhat more palatable. Bray retired a three-time runner up. He would be remembered quite differently with just one different result.

Jason Dunstall knows how it feels to finish desperately close to winning a Brownlow. Despite being on a goal kicking rampage in 1992, finishing the home and away season with 139 goals to his name (he would kick six more in the elimination final to total a mammoth 145 goals for the year), he could only manage eighteen votes, falling two short of the Bulldogs’ ruckman, Scott Wynd. His six-goal haul in the final round were not enough to secure him any votes. Four years earlier, Dunstall was in a similar situation, finishing second to Sydney’s Gerard Healy despite kicking 124 goals in the home and away season.

Dunstall may have won three Coleman medals for his feats in front of goal, however his inability to win the Brownlow in ‘92 instilled a real sense amongst the AFL community that the award was destined for midfielders only. Dunstall’s 1992 season was seemingly the last chance for the power forwards. Since 1987 (the year Tony Lockett became the only full forward in history to win the medal) not one forward of any sort has topped the voting.

Never has the midfielders’ dominance of the award been as evident as it has in the polling record of Gary Ablett Junior. While his father is still hailed by many who saw him play as the greatest to ever pull on a pair of boots, it’s Junior who has compiled an incredible Brownlow record of two wins and two runners up finishes.

Ablett’s wins in 2009 and 2013 are impressive enough, but he was also in strong contention in both 2010 and 2014, finishing behind Chris Judd by four votes in 2010, and losing to Matt Priddis by the same margin four years later. Ablett’s consistency, along with the umpires’ penchant for rewarding those who play in the middle of the ground, has seen him in a position to win four medals; a feat never before accomplished.

Gary Jnr’s seasons from 2009 to 2014 comprise one of the greatest six years stretches in history. I’ve not yet had the chance to read Gaz’s recently-released biography, but it will be interesting to read whether it was the wins or the losses that get the most ink.

Winning the Brownlow is second only to winning a premiership medal, or Norm Smith for most players. Runners-up may smile and congratulate the winner, but somewhere in their mind must be the lingering thought of “what if?”

What if he’d kicked five goals straight instead of 3.2? What if their side had won on the day instead of falling short by one point; would that have been the difference between a three-vote and two-vote game? You’ll never hear them give voice to these regrets, at least not while they’re still playing. It sounds petty, but it’s human nature to play those moments over and over in your head.

The pain of losing a Brownlow is downplayed. The accolades go to the winner, and rightly so. However, in the world of the AFL, where second is very rarely remembered, let alone celebrated, there are quite a few who deserve recognition for their repeated excellent seasons.