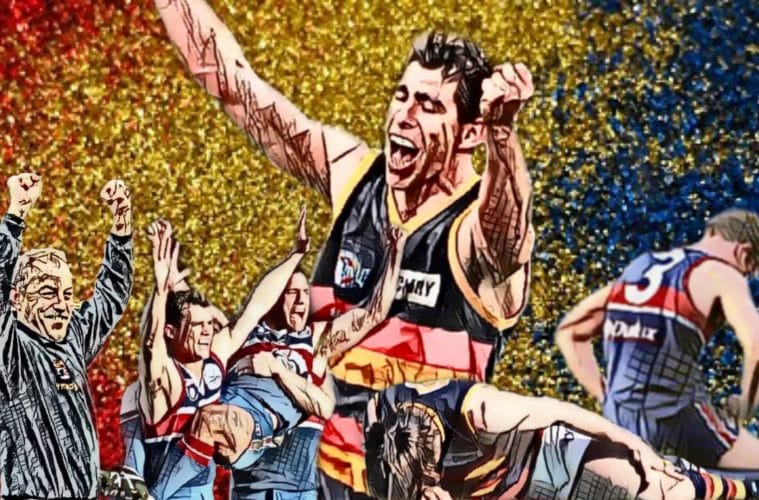 MEMBERS – The Oral History Of The 1997 Preliminary Final

I’m not sure any Western Bulldogs fan, or any Footscray fan will ever get over the events of 1997. Whether they were adults or kids… it doesn’t matter. If you bring up the Preliminary Final against the Adelaide Crows, you can see them visibly recoil, as though the mere mention of that game has caused an involuntary emotional reaction.

It is a scar that has never fully healed.

“I still can’t watch it,” said one Doggies supporter. “When I hear someone mention it, the memories come flooding back.”

He looks down and away, then shakes his head.

“We should have won that one.”

Is there a worse feeling than having something you’ve longed for within your grasp, tantalisingly close, only for it to be snatched away? And does it make it worse knowing that you’re responsible for allowing it to slip away?

The Western Bulldogs should have met St Kilda in the 1997 AFL Grand Final. They should have ended a long Grand Final drought 19 years before they raised the premiership cup against the Sydney Swans in 2016.

It was the Adelaide Crows who ran over the top of the Dogs, with Malcolm Blight swinging the changes at half time and the Crows riding some powerful contested marking from Nigel Smart, some midfield grunt from Mark Bickley, a sign of things to come from Tyson Edwards, and a blistering burst of Darren Jarman forward-craft to snatch the victory. An Adelaide team full of self-belief made their way into their first ever Grand Final, and defeated St Kilda to win it all.

They were a team of destiny, fuelled by a coach who was, fair to say, a little bit left of centre. And they got inside the heads of the Bulldogs players. It was self-belief versus self-doubt, and there can only ever be one winner in such a contest.

Where did things go so right for the Crows? And where did things go so wrong for the Bulldogs? Was it the coaching genius of Blight, or a flaw in the coaching of Terry Wallace? Was it the adoption of tactics to save the game, or the dare demonstrated to win it that was the catalyst for one of the greatest victories in Adelaide history, and perhaps the most devastating loss in the lives of Dogs supporters everywhere?

Here is the Mongrel Punt’s oral history of one of the most famous Preliminary Finals of the modern era.