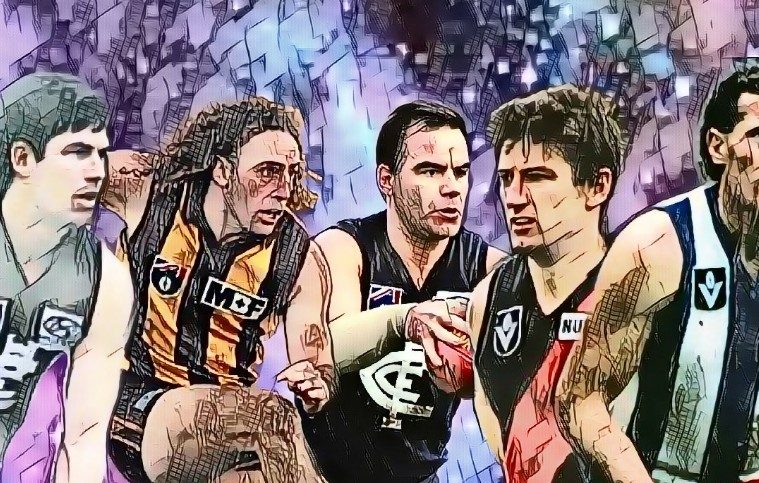 We have taken a lot for granted over the years, haven’t we? In a time where there is no footy to watch, many of us have delved into history to reminisce about an age gone by.

I’ve done it, and will continue to do so until we get something resembling a season out of these uncertain times. Along the way, I have been lucky enough to find little snippets that make the journey back in time worthwhile.

I came across one of these little snippets as I was looking at notes for a couple of vintage games I was covering for some upcoming articles. Whilst looking up a few facts, and checking a few of what I thought were facts before publishing (I do that… but only from time to time) I encountered the honour of “VFL Team of the Year” as an award some players were able to obtain throughout their footy careers. A little research was required, so down the rabbit hole I went.

Yes, I realise there were AA awards they’d hand out as part of state of origin carnivals in that period. I’ll get to that later.

Oh, but I hear the arguments already – “This team of the year concept is just a VFL-centric team, and players from West Australia and South Australia wouldn’t have been recognised unless they moved to Victoria.”

And yeah, you’re right, it’s not fair, but I didn’t choose where players played.

For the purpose of this article, we’re gonna have to wear this “VicBias” just this once, okay? Selection in this combined team of this nature deserves recognition.

Players named as an All-Australian prior to 1991 were basically players who strung together a couple of good games as part of the state of origin carnivals that were held… hmmm, ‘sporadically’ would be a good word to describe their frequency. From 1972 until 1988, there were eight carnivals, which meant that the best you could achieve… assuming you played all 18 years, was eight All-Australian selections.

It was a cobbled together selection of players based on how they fared over two or three games – hardly the best way to determine the team of the season and a far cry from what being named All-Australian currently means.

All-Australian selection back then had a very narrow window for players to be at their best and gain selection. It was busy league to a point, but that was the nature of it at the time.

Take for instance Alex Jesaulenko – All-Australian in the 1969 carnival. He should have been able to go back and become a multiple-time All-Australian at several Origin carnivals, right?

Nup, he couldn’t. The next carnival was in 1972, and whilst he managed a second AA berth there, there was not another chance until 1979, and Jezza was past his best by then. So, bad luck Jezza. You’re a two-time All-Australian and that’ll be it for you. Thanks for coming.

How about someone like Fitzroy’s Garry Wilson? All-Australian in 1979 and 1980. He had the chance to really rack up a few selections as one of the best rovers in the caper. But of course, there were no carnivals in 81 or 82, and thus no AA team again until 1983. By 1984, Wilson was done with the game, so it wasn’t exactly rewarding consistency, was it?

Okay, now that I have royally pissed off people from at least two footy states, as well as All-Australian loyalists, I should take a minute to look at what being named in the VFL Team of the Year SHOULD mean to the legacies of the players.

In contrast to the hodgepodge of All-Australian selection prior to 1991, the VFL Team of the Year was named from 1982 until 1990 (yet I cannot find 1985 for the life of me! The VFL didn’t produce a yearbook in 86, so the team from 85 was not readily available). The selection of this side was more consistent, and gives a fantastic indication as to who was playing well for an entire premiership season, or several seasons in a row, as opposed to two good games representing the state every two or three years.

I’m not attempting to whack State of Origin, or selection in teams to represent your state – selection is an accolade in and of itself, but I believe achievements in those games and at those carnivals should be kept completely separate from awards pertaining to the performance over the whole season. All-Australian is now based on your performance over the season, and we have the opportunity to backdate that. The info is already there, and in the process we can give the AA selections acquired in the old carnival system recognition without fitting them in like a square peg in a round hole.

In regard to the all-time All-Australian selections, what we have now is a miss-mash of season awards (from 1991 onwards) and state of origin carnival awards (from 1988 backwards to 1953).

Paul Roos was able to bolster his total number of All-Australian blazers with selections in the carnivals in 1985, 87 and 88, which in itself is a great achievement, but against his peers in the VFL, he made just two VFL teams of the year in that timeframe – 1986 and 87. In 84, he had to take a back seat to Ross Glendinning in the team of the year, yet Rosco has just one All-Australian selections under the current system. It’s wrong. Glendinning’s four selections in the VFL Team of the Year are an outstanding return.

For the record, Roos was third in the Brownlow in 1985, so chances are he’d have a selection that year as well if that team ever finds the light of day.

The VFL housed the best players in the land through the 1980s. Of this, there can be little doubt. There is a very good reason that the VFL became the AFL, and the other state leagues became… state leagues.

Some South Aussies will argue that Garry McIntosh, Michael Aish, Russell Ebert or Graham Cornes were in the top handful in the land at times during the late 70s and 80s, but McIntosh and Aish opted to stay in the SANFL, whilst Cornes and Ebert did venture into Victoria, but probably too late in their careers to really make an impact (Ebert did have a ripping season in his one year at North Melbourne).

West Aussies will sing the praises of Stephen Michael til the cows come home but given he was never a part of the VFL, it is hard to gauge just how good he could have been. Many of the top WAFL players made the jump to the VFL, and their exploits are represented well.

So, below, I have compiled eight of the nine VFL teams of the year. Have a bit of a peruse and I’ll jump back in following the lists.

So, now that the teams are up there, let’s take a look again what this means for legacies.

John Platten is currently listed as a one-time All-Australian. Just once – in 1992. Don’t you think he was a little better than that? He’s a Brownlow Medallist for Gary Ablett’s sake! If we add four VFL Team of the Year awards to his name, it becomes a little more impressive. It’s kind of like making him a five-time All-Australian.

That is much more commensurate with his impact on the game over the years.

Ken Hunter had one AA nod at the carnival in 1980. He was done and dusted before they were handed out for actual in-season performances, but he was selected twice in the team of the year.

Robbie Flower? Three times in the team of the year

Ross Glendinning? Four-time team of the year representative – far more reflective of how good he was than the single AA selection he received. He was a beast.

Collingwood fans – Darren Millane gets the nod as well, which should bring a smile to your face.

Carlton fans – Stephen Kernahan garners four selections in the team of the year as his prowess as centre half forward is recognised properly.

West Coast fans – don’t like it because it is too VFL-centric? John Worsfold is a two-time selection. Guy McKenna gets a guernsey, and so does Chris Lewis. For a bloke as talented as Lewis, no All-Australian selection is a joke, but here he is being recognised for his 1990 season.

There are other winners here.

Simon Madden rams home just how good he was through the 80s with six selections, whilst Gerard Healy slots in with five – people forget how good this bloke was. Players who are named in this team that never received an AA nod include Peter Daicos (Yep, never got an AA nod), Mark Bairstow, David Rhys-Jones and Wayne Johnston.

The VFL Team of the Year may not be your cup of tea, but it is an accolade that has been lost in the shuffle over the years, and some of the great individual seasons in V/AFL seasons have not been the recognition they deserve. My hope is that this article allows them a bit of a chance to shine.

And if anyone ever finds the results from 1985, please let me know… this is killing me!

MULTIPLE SELECTIONS IN THE VFL TEAM OF THE YEAR 1982-90

So, there we go. On a personal note, I was a little shocked to see Jim Krakouer make the team twice, but Phil didn’t get a spot higher. I always loved the way Phil played. Maybe I was in the minority?

And how underrated is Brett Lovett in footy history? Three selections in this team are nothing to sneeze at.