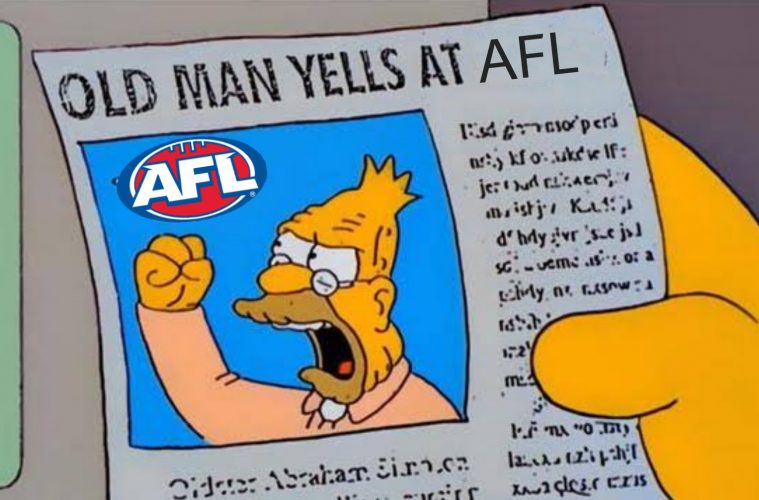 There was a time when I almost walked away from watching footy.

Crazy to think, that a bloke who runs a site as a labour of love was close to falling out of love with the game, itself. However, it was very close to occurring back during the Essendon Supplement Saga. Every newspaper, every TV show, every last little bit of media focused on Essendon, the players, the coaching staff, and their apparent wrongdoings.

I wanted footy news. I got off-field drama, and I was over it. As a Hawthorn supporter, there would be some that would think I would have been revelling in the drama surrounding the “enemy”. That was not the case – not by a long shot. I didn’t view that as a bad time for Essendon – that was a horrible time for football.

During this time, one thing kept me coming back – the game, itself.

I have always been a believer that the AFL have on their hands a product so good that it can overcome scandal after scandal. Drugs, sex, idiocy… the game endures because it is so damn good. It is the league’s golden goose – no matter what else is happening around it, or how ineptly those at the top handle things, it continues to lay the eggs worth a fortune.

However, over the last couple of years, the golden goose has come under attack from those who are supposed to be protecting it. Axes in hand, they have stalked it, looking to lop off its head and kill it.

No golden goose… no golden eggs.

Things seemed to come to a head this past weekend with a plethora of umpiring decisions that were, to put it mildly, simply baffling. Some were resultant of the AFL wanting to crack down on umpire dissent, or the result of their implementation of rules around standing on the mark, or entering the protected zone, but there were others that seemed to concentrate on contact made by players.

On some occasions, it was tackles that were deemed illegal despite looking like fantastic tackling efforts. Jayden Short, Dylan Grimes and Tarryn Thomas looked on in disbelief as they were penalised for tackling the exact way they would have been taught. No one was hurt, but the umpires, obviously under instruction, opted to penalise what was simply good, hard footy because…

… because they thought it may have looked bad if they didn’t?

Was that it? Were they to be held to account if they allowed tackles that were simply aggressive go without penalty?

To make matters worse, in one of the more over-officiated games in recent history, the umpires in the Hawthorn v Brisbane contest seemed driven to control the game, rather than allow the players to dictate how they were going to play. The free-kick for “prohibited contact” against Tom Mitchell on the boundary line during a dead-ball situation, where he seemed to softly push an opponent in the back/side as he was on his hands and knees, causing the near disastrous effect of his opponent tilting to one side slightly, made a mockery of our game.

A free-kick for that? Get the pleated skirts out… contact, wing defence.

This, while the obvious free kicks – Jai Newcombe being caught cold holding the ball in the dying minutes of the game – were missed, or deemed unworthy of a free-kick.

It was as I watched this game (Hawks supporter, remember? I should have been pleased) that I was so disenchanted with what I’d seen that I started to wonder whether there were betters ways I could be spending my time than to cover a game that is headed down a path that will see it resemble Gaelic Football in a matter of years.

Restrictions around tackling have tightened to the point where the action is rarely rewarded with a free-kick – in rounds five-thru-eight, six teams played entire games of footy where they were paid one holding the ball free-kick for the game – ONE!!!

Why bother tackling? You’re more likely to hit someone high, push them in the back, be penalised for holding too long after the ball-carrier drops it, or be pinged, and suspended, for a dangerous tackle than you are to win a free-kick.

You have to wonder whether physical contact is an aspect of the game those in charge at AFL House don’t actually want in the game, at all? The rules and their more recent implementation seem to indicate that this could indeed be the case.

This is not an attack on umpires – I reckon their jobs are incredibly difficult – but the expectation on them to enforce a set of nonsensical rules designed to make the game more clinical, less emotional, and less physical are more likely to have rusted-on fans walking away than sticking it out.

The only thing keeping some around right now is loyalty. They love the clubs they support – it is a part of who they are, but that loyalty is being stretched by a competition that doesn’t realise how close it is coming to losing those who love it the most.

You can only kick a dog so many times before it stops coming when you call it. The call of the AFL is starting to weaken for people who remember footy where big, fair hits, hard, punishing tackles, and genuine physical pressure and intimidation were aspects the league focused on as positives. Remember “Biffs, Bumps, and Brawlers”? The league produced two bloody volumes of them on DVD… but don’t do what these fellas are up to or you’ll be suspended!!!

I may be a bit of a neanderthal in this regard, or even a throwback to a time that’s remnants are fast disappearing, but I enjoy the gladiatorial aspect of footy. I want to see men acting like men and getting in each other’s faces. I want to see them tackle hard and crash into each other. I want to see the emotion – see that they care, that they are giving their all and are exasperated when all their efforts amount to little. But what I am seeing at the moment is so far removed from the game I grew up playing, that I feel like a stranger in a strange land when I attend a game.

What was that free-kick for? And a 50m penalty? For what?

I am sure I am not the only one at the ground looking around, wondering what the hell is going on out there, am I?

We get some reminders here and there of how great it can be – Jeremy Howe pulled down a ripper mark on the weekend, and the attack on the footy of Aaron Naughton in the first half of the Dogs v Suns clash made me smile, but in between all that stuff were the dangerous tackles where no one got hurt, 50m penalties that detracted from the game, and players that dared to show emotion being punished as though they were malfunctioning robots.

I don’t know about you, but I genuinely don’t want to watch that.

The outcry from former players was deafening.

Adam Cooney, Matthew Lloyd, David King, Tom Rockliff, Matthew Richardson… all were vocal on the decisions being paid at points over the weekend, and it is hard to blame them. They are watching a game they loved being turned to mush right before their eyes, much like the die-hard fans.

The AFL are hoping that, like other dinosaurs, I’ll join my extinct brethren sooner rather than later. There will be a point where people don’t remember how good footy was 20 or 30 years ago. We’ll be gone, and what we’ll be left with is a sport where contact is frowned upon and running with the flight of the footy is no longer seen as an act of courage, but an illegal action on the field.

What? You disagree on the last one? Think it’s ludicrous?

If you have a time machine handy, jump in and tell a few players from 25 years ago they will be penalised 50 metres for putting their arms out, and suspended for tackling hard. They would think you’re crazy – just wait for there to be one serious injury with a bloke running with the flight, ala Harris Andrews four-or-so years back. That’s all it will take for the drums to start beating.

Look, I will happily admit that the AFL get some right – the 6-6-6 rule is a good one. It keeps the forward line open and gives us as good a chance at seeing one-on-one contests inside 50 as we’ll get, but if you’re going to bask in the glory of getting something right, you have to be mature enough as an organisation to admit you’re getting other things wrong.

And then mature and intelligent enough to change them. That combination is all-too-rare.

The AFL is now standing over the game with an axe in hand. To this point in history, our sport has been able to repel all attacks on it, but I am not sure it is going to survive this unless someone steps in, rolls back a few of the unnecessary changes, and stops treating it like it is their personal plaything.

Creating a fan is easy. Getting someone to come back after they walk away… that is pretty difficult.

And that is where a lot of people find themselves right now. They’re starting to walk away, or at least change the channel. If the AFL cannot save the golden goose very soon, those people will be gone.

And if they’re gone, and their interest in the game buried, we’ll be a step closer to the golden goose being dead, too.