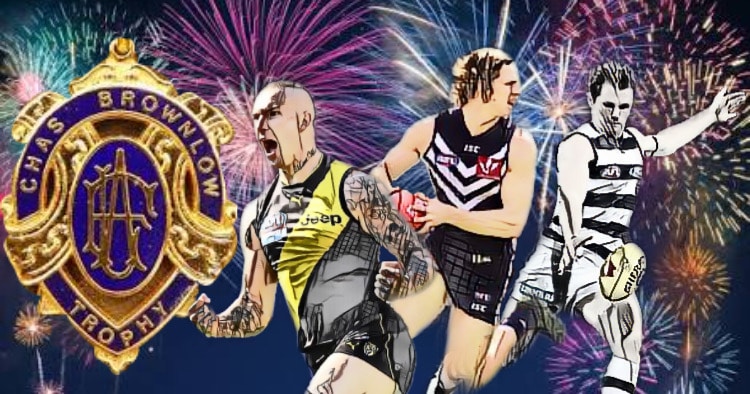 In recent years we’ve seen Nat Fyfe, Tom Mitchell, Patrick Dangerfield and Dustin Martin collect the award, but how have those blokes fared over a five-year duration?

The Mongrel once again uses the most complicated mathematical theory at his disposal (addition!) to compile the highest vote winners over the 2015-19 seasons to find just who has been the best over the last five seasons.

For many it would seem as though Jack Macrae has only really emerged in the last couple of seasons, with his first AA berth coming in 2019. However, aside from a very low-scoring 2016 (one vote), the prolific ball-winner is a standout performer.

I wonder with a suspension of Lachie Hunter seemingly pending, whether Macrae’s role will see him drift more to the outside to compensate when (if) the season resumes. He is highly capable of winning his own footy, but is best suited to the run and carry role to feed off the grunt work of Bont and Dunkley.

With 37 of his 60 votes coming in the last two seasons, the only ruckman in the countdown manages to out-do his closest contemporary (Grundy) by 11 votes.

Gawn’s ability to shift gears and drift across half back added to his game in 2019 and in a team functioning well, that aspect will become a huge asset going forward.

He rode the wave of Demon success in 2018 and was easily Melbourne’s best player in 2019 as well, but his 2017 and 2015 left a bit to be desired, compiling a combined total of seven votes across those two years.

Considering the Merrett has secured votes in only the last four seasons, his placing here is impressive.

Whilst some would look at Dylan Shiel or Dyson Heppell as the heartbeat of the Bomber midfield, my vote goes to Merrett. When he is up and about, so are the Bombers. In double figures in voting each of the last four seasons, his performance is closely linked to the success Essendon.

He was rewarded for his play with the sole-captaincy in 2019 but was unable to lead the Crows to September. At 30, you have to ask whether we have seen the best of Sloane? He has compiled a total of just 13 votes over the past two seasons, and though his numbers still look good, we haven’t really seen those standout kind of games from him over the last two seasons. He had six 30+ disposal games in 2018-19. He had eight in 2017 alone.

Maybe 2020 will see that side of his game re-emerge.

Tried in a more outside role in 2019, Sidebottom was down on his spectacular 2018 form that saw him rack up 24 votes, dropping to just seven last season.

Some credit needs to go to Sidebottom, who willingly accepted the more outside role, with the Pies laying claim to a huge array of midfield talent, beginning 2019 with Sidebottom, Pendlebury, Treloar, Adams and Dayne Beams (initially) all vying for midfield minutes to start the year. They were soon joined by Jack Crisp. As a result, Sidebottom had his lowest average in contested possessions in five seasons.

With the Magpies falling short in 2019, is a move back into the mix on the cards for Sidey? And does that bring with it another increase in Brownlow votes?

Maybe my favourite player not from my own team, Selwood is a player I would gladly follow into battle, and it is because he is the sort of leader that would refuse to allow his men to go into the fray ahead of him.

Often maligned for his ability to extract free kicks, Selwood’s 2019 form fell away in the home and away season, only for him to be close to the Cats’ best player in the finals. It was later revealed that the captain was carrying an injury all season, which may indicate why he was able to pick up just three votes in the count in 2019.

Continually underrated and overlooked on the premise he doesn’t deliver the ball well (which was right five years ago, but not now), Treloar is completely relentless when it comes to running his guts out.

With Pendlebury ageing slightly (come on… it’s gotta happen sooner or later), Treloar’s position in the Collingwood midfield is becoming more important, and his combination with Taylor Adams will underpin the Magpie on-ball contingent for years.

At 32, you could be forgiven for thinking that Gray’s best footy is behind him, and in truth, over the last couple of seasons we’ve seen him come back to the pack a little in terms of genuinely classy mid-forwards.

Gray has won a record five Showdown Medals and continues to rise to the occasion in big games. Can he muster one more stellar season to carry the Power into the finals? With just one season in the last five with a total of under ten votes, the Power need him to be at, or near his best in this shortened season.

Buddy may have fallen away a bit last season, but prior to that, he had a very consistent three year run in the award, with 54 votes from 2016-18. Those totals made him the highest-ranked, and ONLY forward listed in the top 20, which is indicative of the nature of the Brownlow, I guess.

Buddy had only three votes in 2019, which impacts his standing here.

It’ll be interesting to do this tally again in five years. I’m not sure many will be beating out Cripps for a top three spot by then.

His injury-interrupted 2017 probably costs him a few places here, but he has been huge with 46 votes in the last two years.

Failing to hit double figures just once in the last five seasons, Gaff has been one of the Eagles that has continued to shine bright even when the team hasn’t hit the highs it’s become used to.

As good as Gaff has been, he has cracked 20 votes in the count just once in the last five years, but I really expected him to re-establish himself as the game’s premier wingman in 2020 with Tim Kelly taking on more of the inside work.

His 30 touches and a goal in Round One, whilst running at 86% efficiency is the kind of output that will continue to attract the attention of the umps.

Consistent and brilliant, Pendlebury would probably be top ten for the five years before this period as well. Is he the greatest Magpie of the modern era? He’d have to be close.

I wonder if Mike Sheahan still thinks he is no longer an A-Grader?

Missed the entirety of 2019 with that horrible broken leg, but his 2016-17 totals of 53 votes carry him into the top ten irrespective of missing the whole season.

Mitchell is a ball-magnet, and despite the year off, looked good in Round One. He is one of the few players who could benefit from this break, as it gives his recovering leg even more time to heal, and the confidence in his body will have returned, having got through his first game back.

I’ve often thought Parker is on the cusp of being a top-ten player in the game, but just failed to take that step time after time. Maybe I was forgetting about 2016?

Parker was in double figures the next three seasons as well as he maintained a high, if not brilliant standard.

The old fella may have a bit left in the tank, but his results over the last five years indicate his days of being one of the dominant mids in the game may just be coming to an end.

He started 2020 in nice touch, with 25 touches and ten clearances, and may have been readying himself for one more big year.

MEMBERS – The Oral History Of The 1997 Preliminary Final

There is a reason many believe that Bont will win a Brownlow. His play is eye-catching, and though he lifted his game to a new level in 2019, he was already receiving the umpires’ attention in the years before.

Moving out from under the shadow of Nat Fyfe was a great move by Neale, and his Brownlow numbers reflect that. Prior to 2019, his highest total in the count was 20, and last season he bettered that by six votes.

Normally, I am a big believer that players need a season to adjust to their new roles when they switch teams – not Neale. He slotted into the position of the ball-winner at Brisbane, and it is no coincidence that their meteoric rise up the ladder was on the heels of their recruitment of Neale.

An injury-interrupted 2016 season is probably the only thing preventing Fyfe from giving the top two a nudge here. Playing just five games that season, Fyfe’s total of four votes really drag him back to a level below the next two, but above the Bontempelli/Kennedy/Neale cohort.

I am of the strong belief that on his day, there is no better player in the league than Fyfe. He wins the ball in the contest, is close to unbeatable in the air for a midfielder, and has added an element of desperation to his game in recent seasons that has answered some of his critics.

I might cop a bit of flak for this, but right now, if we lined up the AFL players against the wall for a game of footy, and I had first pick, I’d take Fyfe.

There were a few who speculate that Dusty goes into cruise control to a degree during the home and away games and then explodes when the games really start mattering, and both his 2017 Norm Smith, and entire 2019 finals series would back that up.

However, the totals of his last five Brownlow vote tallies suggest quite the opposite. Some would kill to poll 19 votes in a count – that number is Dusty’s lowest amount in the last five seasons.

There are a few who don’t like Danger. Maybe he is too outspoken for some, but there is no arguing with his personal performance since 2015. Starting with his final season in Adelaide, Dangerfield has played at a level unsurpassed in the home and away season, and is a favourite with the umpires.

It is hard not to notice his blistering breaks from the centre and his desperation in the contest can turn 30-70 situations into true 50-50s just with his intensity.

Though the ultimate success has eluded Danger to this point, his personal performance has been absolutely exceptional.

So there we go – I bet a few of you thought Dusty was going to reign supreme, right? Nope… but I am sure you Richmond supporters can sit back, think about those two premiership cups, Dusty’s two Norm Smith Medals, and have a good smile.

On a serious note, I genuinely believe that Dangerfield needs a flag to cement his legacy. Great player – yes, but a great player without team success is… well, look at the way people speak of Karl Malone’s NBA legacy. That’s the way Danger is headed without a premiership. I can’t wait for the season to get back. I want to see if he and his team can pick up the gauntlet the Tigers have thrown down.

Or whether they’ll be surpassed by some of the other contenders.