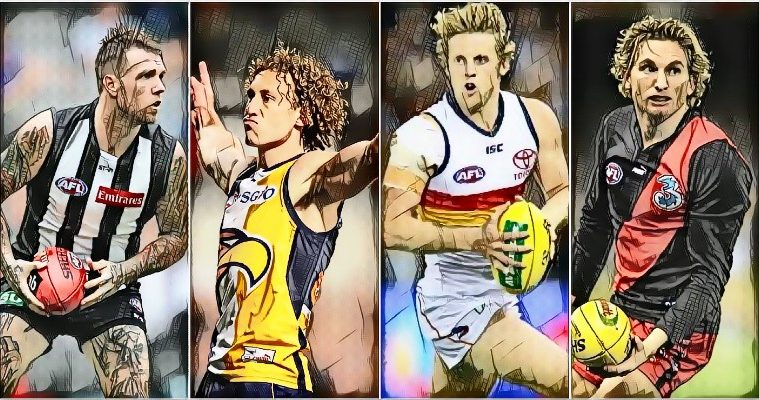 The Diamonds In The Rough

As we move towards the AFL draft, there is much speculation as to who will go top ten, and which teams are looking for which type of players.

We rate the first round of the draft as if each selection is key to a team’s next premiership. The first round, especially top ten draft picks are heavily guarded at the trade period. Receiving one is rare and receives applause from the media guys and fans who love that kind of thing.

But we all know that about half of the guys picked up in this years’ draft will not go on to be players of any standout quality. Fewer still will retire on their own terms, and even fewer of those will retire at the club who originally picked them up. We rarely give the same level of excitement towards the latter part of the draft as we do to the first round, but usually we can expect almost as many gems in those late rounds as we can in the early stages.

In this article, I’ve scoured the drafts from 1990 to 2013 to see if I can find some diamonds in the rough and perhaps a few first round regrets.

James Hird’s legacy speaks for itself. Taken at pick 79 in the 1990 draft, Hird would go on to play 253 games for Essendon. He managed to play 25% of the combined total games each pick would play for their original side in that year’s draft. Two Premierships, a Brownlow, five All- Australians, a Norm Smith, a captain and team legend. It’s fair to say that if the teams had their time again, Hirdy would’ve gone 78 spots higher up.

In a year when new club Fremantle was busy selecting Clive Waterhouse with the number one pick, North worked a bit smarter and waited until pick 47 to draft a little player named Brent Harvey. Clive would go on to become a cult hero, but Harvey would excel at North, becoming the VFL/AFL’s games record holder, winning a premiership medal, earning four All-Australians, a Jim Stynes medal, and a place in Kangaroos’ team of the century. It’s fair to say North have fewer regrets than Freo in that year, also snaring Fremantle’s dumped Peter Bell with their first selection in the following pre-season draft.

Taken at pick 68, Russell Robertson was the pick of the 1996 national draft. He went on to play 228 games for Melbourne and lead their goal kicking on four occasions to finish with 428 goals for his career.

Missing that draft, but also taken by Melbourne late in the 1997 pre-season draft, was Shane Woewodin who would go on to win the Brownlow medal in 2000 before finishing his 200-game career at Collingwood.

In a draft that included the likes of Ottens, Croad, Tarrant, Chad Cornes and the great Rowan Jones, one of the greatest Queensland turned West Australian players in the modern era, Simon Black, had to wait until pick 31 to be selected. Black would go on to play 322 games winning a Brownlow, a Norm Smith, three B&Fs, and three All-Australians.

Adam Goodes was taken in the same year as Black but had to wait until even later in the fraft. The twice Brownlow medallist, three time B&F winner, four time All- Australian and Australian of the year went at pick 43 behind the great Matthew Dennis (5 games).

Six-time All-Australian Matthew Scarlett had to wait until pick 45 to be selected via a father/son selection in the 1997 draft. He would go on to play 284 games including three premierships and also got to punch Hayden Ballantyne in the face. He lived the dream.

Brendan Fevola was taken at pick 38 in the 1998 AFL national draft. He’d go on to play 204 games, kick 623 goals, finish with two Coleman medals and as a seven-time club leading goal kicker. Although his career was marred with controversy, there’s no doubting that, in hindsight, 15 other clubs would have been happy to have grabbed him with one of their earlier picks.

In the draft where Richmond were busy recruiting Aaron Fiora instead of Matthew Pavlich with the first regular pick, some premiership legends and other would be club greats had a nervously long wait before being selected. It was Geelong who snared the most bargains that year.

But perhaps the best two bargains of the 199 draft came from the rookie draft. With pick 23, St. Kilda picked up their future four-time leading goal kicker and dual All-Australian Stephen Milne. The West Coast Eagles used pick 28 in the rookie draft to grab Dean Cox, who would arguably revolutionise the way ruckman played the game and win six All- Australian berths during his premiership-winning career.

The year 2000 saw a logically chosen Nick Riewoldt be selected at number 1. Adelaide’s Graham Johncock had to wait until pick 67, shortly after Collingwood chose to skip their selection and Fremantle picked Scott Thornton. Johncock would play 227 games and be the Crows’ 2003 leading goal kicker.

In 2001, while St. Kilda were taking Xavier Clarke with the regulation pick 3, Geelong got a bargain snaring Stevie Johnson with pick 23. Hawthorn snared their future four-time premiership, five-time B&F, three-time All-Australian, Brownlow-winning player in Sam Mitchell with the pick 36 they received from Fremantle. Collingwood snared their future Brownlow Medallist Dane Swan with pick 58, and Brian Lake had to wait until pick 71 to be taken by the Dogs.

Kade Simpson had to wait until pick 45 of the national draft before he could begin his 325-game career for the Carlton Blues. Fremantle found their future B&F winner Ryan Crowley with pick 55. Hawthorn managed to snare a reasonable 200 gamer from the rookie list called Brad Sewell, who can sit pretty in retirement with a B&F and a couple of premiership medals to his name.

While Hawthorn used their third-round selection on Zac Dawson (41) the Saints snared a handy player in Sam Fisher with their pick 55. In his 228 games, Fisher won a B&F, an All-Australian and played in three grand finals (along with Zac Dawson, ironically).

2004 saw Adelaide find their future captain Nathan Van Berlo with pick 24. Port waited until the Rookie draft to pick up NAB rising star, and 250 gamer Danyl Pearce, but it was West Coast with pick 37 who found the diamond in the rough. The Eagles picked up Mark LeCras with pick 37. LeCras would play 213 games, be a dual leading goal kicker, B&F player, All-Australian and win a premiership.

Adelaide snared Bernie Vince among the rubble of the 2005 draft with pick 32, after missing out on guys like Jarrad Oakley-Nicholls (8), Darren Pfeiffer (17) and Nick Lower (30). Vince would go on to play 229 games for two clubs (129/100), and win a B&F with both clubs he played for. The West Coast Eagles found their gem on the rookie list, picking up future Brownlow medallist and captain Matt Priddis with their pick 31.

2006 saw a host of good players picked up late. While forwards like Scott Gumbleton were going at number two, Geelong found a reasonably useful player in Tom Hawkins with the father/son pick 41. Having no regrets on missing out, Essendon grabbed Bachar Houli with pick 42, and didn’t play him enough. He moved to Richmond who are now two premierships better off with him in the side. Collingwood snared a handy player in Tyson Goldsack with pick 63, while Port snared their versatile B&F winner Justin Westhoff with pick 71. Hawthorn grabbed classy Matt Suckling with pick 22 on the rookie list.

While Fremantle may have been regretting missing out on Benjamin Griffiths at pick 19, they almost made up for it by grabbing a skinny kid called Nathan Fyfe with pick 20. Fyfe has repaid them nicely, winning two Brownlows and becoming club captain. Max Gawn slipped through to pick 34, before being grabbed by Melbourne and becoming one of the more dominant rucks in the competition. Fremantle struck again, finding Michael Barlow on the rookie list. And I wasn’t going to include first rounders, but Richmond get a point for finding Dustin Martin, who Melbourne decided to not pick despite having the top two picks, allowing pick number one, Scully, to leave after just 30 games.

Brad Hill had to wait until pick 33 to make his way to be a three-time premiership player with the Hawks, with Freo deciding Sheridan and Crozier would be better suited than Stephen Hill’s brother. Speaking of Freo, their B&F player Lachie Neale made his way to the club with pick 58. Geelong found their reliable defender, Mark Blicavs from athletics and gave him a shot with pick 54 in the rookie draft.

Orazio Fantasia and James Sicily went at 54 and 55 in the 2013 AFL draft, while other teams took Cam McCarthy, Christian Salem and Ben Lennon with their first-round selections. Tom Barrass made his way to the Eagles via pick 43, and Ben Brown ended up at the ‘Roos with pick 47.

And there you have it. Some of the best draft steals in recent memory. Who was the biggest steal of the lot of them? And did we miss anyone? Feel free to add your own on our socials or in the comments here.