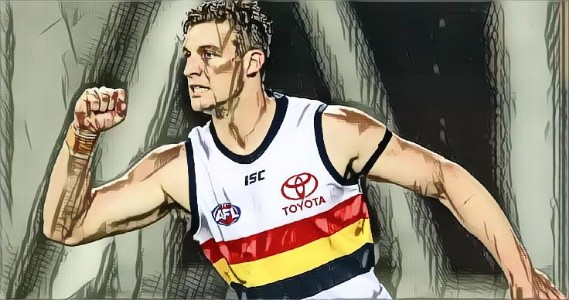 Could Josh Jenkins Be The Most Underrated Pick-Up Of This Off-Season?

Let’s jump in the Mongrel time machine for a moment, shall we? It’s gonna get some good use this off-season – it needs a test. There’s room for two – let’s go.

We arrive in Adelaide on the 29th of March, 2018. The Richmond Tigers have come to town, and as silly as it seems now, knowing what we know, the Adelaide Crows are looking for some form of revenge against the team that rolled over them to capture the 2017 premiership

Their Grand Final defeat is stinging and we know now that it is a defeat they could not recover from, but on this night, there was a definite feeling that the Crows were far from a spent force and that this was a step on the path back to September glory.

After a tight first half, the Crows would hit the Tigers with a seven goal second half to run out winners by six goals against the reigning premiers, and in the minds of many, re-establish themselves as a contender.

On that evening in Adelaide, one man stood head and shoulders above other forwards on the park. And now, less than two years later, that man is deemed superfluous by many in the AFL community. What short memories they have.

Josh Jenkins did not just kick five goals against the Tigers on that night, he did it against the All-Australian full back, and one of the best defenders of his generation, Alex Rance. So conclusive was Jenkins’ domination of Rance in the first quarter, that rookie Darcy Fogarty had Rance for company once the quarter time siren sounded and Damien Hardwick made his adjustments.

Rance would go onto have a good game, working off the young Fogarty to play the role he was more accustomed to, but Jenkins was far and away the difference between the teams, and he made his statement early in the game.

Arriving back to the current day in the time machine, you wouldn’t know the footy public is talking about the same player that tore Rance to shreds in that game. Looking to leave an Adelaide team that imploded at the end of the 2019 season, Jenkins has been unable to find any takers for his talents, and frankly, it boggles the mind.

After five straight seasons of kicking 40+ goals, Jenkins became one of the scapegoats for the poor performances of the Crows in 2019, relegated to the SANFL with Bryce Gibbs to find some form. He did so, and Jenkins returned to the Crows line up to kick 17 goals in a six game stretch (interrupted by a nasty knee injury that looked like an ACL at the time) before a quiet outing in Round 19 against Carlton saw him again relegated.

For the record, he had plenty of mates against the Blues that day.

Jenkins was unable to find his way back into the Crows team late in the season, with Fogarty assuming the role of second forward to Tex Walker all bit stamping his papers. Rumours circulated that Jenkins had engaged in a heated confrontation with head coach Don Pyke, with some even reporting that it had become physical, with the result being Jenkins cleaning out his locker.

This was dismissed by both Pyke and Jenkins.

However, with Pyke gone and the Crows’ internal review seeing Brett Burton and Scott Camporeale the door, the Crows look as though they are gearing up for a complete reboot. I don’t think the disgruntled Jenkins would be a part of that reboot, unless he is completely forsaken by 17 other teams.

So, with Jenkins offering to play for considerably less money than his Adelaide contract (valid for two more seasons) why aren’t there more takers for a man highly capable of producing 2+ goals per game? Only 16 players in the league averaged two goals per game last season, and if we deduct players who played under five games, that number drops to 13.

Players that can produce like Jenkins are few and far between.

So, where is the best fit for him?

The Cats are trying hard to make Esava Ratugolea their second tall, and in the preliminary final, he had a good first half against the Tigers, but his second half left a lot to be desired. Whilst a decent second option with plenty of upside, Ratugolea goes missing too often and when asked to be the go-to man, was unable to deliver.

Jenkins would make a great foil for Tom Hawkins, when the big cat has one of those days that became a little more common in the latter stages of the season. Hawkins was goalless in three of his final four games of 2019. Maybe a presence like Jenkins could have slotted in and helped the Cats capitalise on a 21-point half time lead?

Aaron Naughton is a star in the making, and will become the centrepiece of the Bulldogs’ forward structure for the next ten years, health permitting. With the Dogs’ efforts to acquire Josh Bruce yet to be completed, Jenkins could be a great contingency plan as a second forward, especially with the way they finished 2019.

The Dogs turned a lot of heads in the second half of the season and would be looking at a top six finish in 2020. It’s a lot to ask of Naughton to pilot the Dogs forward line into September without able co-pilots. Jenkins could take the wheel now and again and hopefully wouldn’t fly straight into the side of a mountain.

North looked great when Jarrad Waite was playing Goose to Ben Brown’s Maverick, but in his absence, Brown was left to rely on players such as Mason Wood to draw heat away from him. Need I go on?

Waite had an element of sneakiness to him in the way he’d get out the back and run into open goals – it’s a role Jenkins excels in as well. Sneakiness at AFL level is a vastly underrated trait.

North have Nick Larkey developing well, but could use another strong body up forward to ease the load on Brown immediately. They have been conspicuously quiet this trade period and I wouldn’t put it past them to snag Jenkins for next to nothing to bolster their forward stocks.

If the Bombers lose Joe Daniher, this seems like a bargain replacement option. He can provide the big body Essendon are lacking up forward (please don’t throw the name McKernan into the same sentence as Jenkins – they are poles apart) and ease the burden on Jake Stringer and the smalls of Anthony McDonald-Tipungwuti and Orazio Fantasia.

Whilst nowhere near the overhead presence of Daniher, Jenkins would be a fine replacement in team that needs a reliable goal kicker. A career average of two goals per game outweighs anyone on the Essendon list, Daniher included.

So, they got rid of Jesse Hogan and expected Tom McDonald to take the mantle of number one forward. It proved too much for him. They also expected Sam Weideman to become much more than he was ready to become. It was another poor decision, and as a result, the Dees collapsed in 2019.

Looking at their forward set up – TMac, Weideman, Petracca and Melksham – Jenkins adds another scoring threat to a team highly capable, yet vastly underachieving.

Looking for some sort of big-body in the forward 50, the Suns could do a lot worse than plonking JJ in there to work with Alex Sexton, Ben King and Peter Wright. When you consider the Suns’ best tall forward averaged 1.2 goals per game(both Wright and King) and their best overall forward, Sexton averaged just 1.8, Jenkins would either be their best target, or take the heat of a solid defender to free the other three up.

Gold Coast were unable to hit the scoreboard meaningfully in multiple games in 2019. Jenkins up forward would go a long way to remedying that problem.

Make no mistake – whether you like the way Jenkins plays or not, every one of those teams is better off with him as part of them. The fact that Adelaide wanted him to be something he’s not is more an indictment on where the Crows were at as a team in 2019 than on Jenkins, himself.

They were a team in disarray, and a team playing without confidence. They took a risk, splintered a team and proceeded to point the finger at select players.

In short, their conduct was a disgrace, and now we have the case of a highly qualified forward unable to find a home heading into 2020. If Jenkins is damaged goods, it is Adelaide who damaged him.

It will be an astute club that acquires Josh Jenkins in 2020. He has a lot to offer, including an average of four goals per game in his last three outings against the Tigers.

Maybe that’ll sway a contender or two? He may look good in hoops.